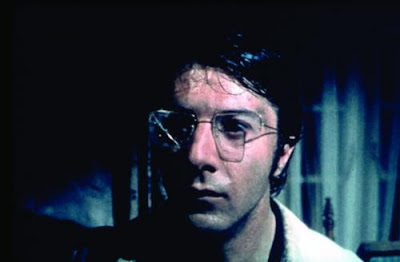 The “1001 Movies” book contains any number of controversial films. At times, it feels like the creators of the book looked for everything that cause a controversy and included it, whether worth watching or not (see my comments on Salo in early February). Certainly a number of worthy films were left off the list. I introduced my kids to The Fugitive last night and still can’t understand why it wasn’t on the list. Not controversial enough, probably.

This doesn’t mean that I’m anti-controversy. Many controversial films are worth watching, some because they are controversial and some despite it. Straw Dogs is a film that is worth watching despite the controversy it caused, and it takes a little digging to uncover the actual controversy itself. You can expect violence—it was directed by the king of slow-motion death, Sam Peckinpah. But it’s not the violence that made the film so controversial. The late ‘60s and early ‘70s were filled with extreme violence movies: Night of the Living Dead (1968), Peckinpah’s own The Wild Bunch (1969), A Clockwork Orange (1971), The Last House on the Left (1972), The Exorcist (1973), and The Texas Chainsaw Massacre (1974). It’s the rape scene that occurs in the middle. We’ll get there in a moment.

We start with David Sumner (Dustin Hoffman), an American mathematician and his British wife Amy (Susan George). The couple has moved to a small town in England so that David can work on his book on celestial mechanics and formulae. Amy spent some time in the town when she was younger, and she is accosted by Charlie Venner (Del Henney), an old flame very interested in rekindling what was once there. Amy’s not interested, though, and she and David head off to their house in the middle of nowhere.

While David works, he and Amy alternately get along and quarrel, mostly over the amount of time he spends with his chalkboard. Outside, a group of local men work at fixing the garage. These men spend a lot of their time hazing David, who is both an outsider culturally and intellectually. What time they don’t spend working, they spend ogling Amy. Amy is both uncomfortable with this and defiant of it, walking around topless at one point just to see their reaction. Amy’s cat turns up dead—hung in their bedroom closet. Amy says this is to prove the men could get into their bedroom, a phrase that soon proves prophetic.

Things turn worse when the locals invite David out for the equivalent of a snipe hunt. While he stands in a field holding a bag, Charlie goes back to the house for some alone time with Amy. And here’s the controversy. Charlie slaps Amy a couple of times and proceeds to rape her. Bad, right? The controversy happens when, part way through the rape, it becomes evident that Amy is enjoying it, even encouraging it. They finish, and another of the men, Norman Scutt (Ken Hutchison), arrives and rapes her again, and she clearly doesn’t enjoy it this time.

The film culminates in a siege of the house. Local Henry Niles (David Warner, uncredited in the role) is a known pedophile. He inadvertently kills a young girl named Janice (Sally Thomsett) and runs off. The locals who have been persecuting David and Amy track Henry to the Sumners’ house, but David refuses to let them have him. And all hell breaks loose as the men attempt to get in and David does what he can to defend himself, his house, and Henry Niles.

A lot has been written about what Peckinpah (who also wrote the screenplay) meant with this film. One of the most common readings of its meaning is that it’s anti-feminist, and that essentially it says that men have to prove to their women that they are willing to fight for them, and that women can only be taken through violence and combat. I disagree. I see how people come to that conclusion, but I also see that that particular conclusion leaves out an important piece of information.

David is defending himself and his house, nothing more. Amy never tells him about the double rape, and he’s unaware that, well, his bedroom has been violated a second and third time. Amy’s desire to leave comes both from her recent rape at the hands of Charlie and Norman and the presence of Henry Niles, a known pedophile and rapist in her house. David simply thinks she’s scared and wants to keep her safe from the mob outside, and is convinced that her actions are nothing more than a manifestation of that fear. He’s wrong, of course, but has no chance of guessing the truth.

The whole point of this film is the violence, which is not to say that it’s violence for its own sake. David and Amy came to England to get away from the increasing violence in the U.S., but the violence tracks them down and they are caught in the middle of it anyway. The violence of everyday life is inescapable, essentially, and at some point, everyone must stand up and face it. That David’s stand is against the right people for the wrong reasons doesn’t matter—the violence occurs naturally because people are violent creatures. The siege is inevitable, because there is no true escape from the troubles of the world.

So why “Straw Dogs”? A straw dog is not unlike a straw man—it’s a thing created to be easily destroyed. Is David the straw dog? Are the men from the local village? Or is the real straw dog the notion that we can somehow escape the reality of the world and the knowledge that every part of our society is violent in some aspect or another? That’s my thinking—the straw dogs of the title are David’s beliefs, which fade the minute he is put into jeopardy. 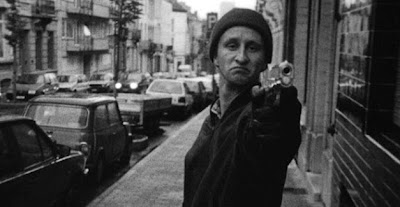 Man Bites Dog is a different take on violence, just as realistic in many ways and far more disturbing. Essentially, this film is a fake documentary about a serial killer named Benoit (Benoit Poelvoorde). Benoit has invited a film crew to follow him around for a while to film his life and what he does. What he does is kill people. A lot of people. While he kills, he discusses the various methods he uses and how he disposes of the bodies. There’s a certain weight needed to sink a body, according to Ben. Typically, it’s three times the body’s weight, but that’s different for the elderly, children, and midgets.

According to Ben, the elderly are the best targets. They tend to have money and people don’t miss them too much. He generally starts the month by killing a postal carrier, using the uniform to deliver mail and steal pension checks, and discover the locations of old people worth killing.

This really is the bulk of the movie. A crew consisting of the interviewer, Remy (Remy Belvaux); cameraman Andre (Andre Bonzel); and a trio of soundmen named Patrick (Jean-Marc Chenut), Franco (Alain Oppezzi), and Vincent (Vincent Tavier) tail around with Benoit as he kills people and steals their money. The body count is impressive, mainly because the longer conversational pieces are cut with montages of Ben slaying multiple people. He tends to use a gun, but frequently strangles or kills in other methods, including causing a heart attack in one elderly woman.

Aside from his constant killing, Ben seems to have a pretty normal life. He gets along with his mother and grandparents, has friends who he enjoys spending time with, and even plays the piano accompanied on flute by a woman named Valerie (Valerie Parent). Some of the people in his life seem to know exactly what he does, but many of them have no idea.

The violence in the film isn’t highlighted as it is in Peckinpah’s film. There’s not much slow motion here. People just get killed when they run into Ben more often than not. This means there are frequent cuts to the local quarry and shots of Ben dumping bodies to avoid detection.

What’s disturbing here isn’t so much the constant death and the huge body count (certainly in the multiple dozens by film’s end), nor even the nonchalance of Ben’s murders. What really becomes disturbing is that the camera crew, particularly Remy, become complicit in Ben’s crimes, even helping him commit a number of them. When the crew starts to run low on funds to keep filming, they rely on the money Benoit steals from his victims to keep them working.

Just as disturbing is how much of the film is played for laughs. Remy gives little tributes to his slain soundmen, both of whom have identical lives—they’ve both recently moved in with a woman of the same name, and both women are pregnant. Going to dispose of another body at the quarry, Ben discovers that the water level has dropped so low that there is a death tableaux of scores of bodies now visible from the top. He stands and directs the other three as they dig into the floor of the quarry to hide the evidence of Benoit’s crimes.

Like Straw Dogs, the violence here is a part of the film world, inevitable and inescapable. The difference is that here, the violence not only can’t be avoided, it is sought out and, while not precisely reveled in, seen as being a completely natural and good thing. It’s a guilty feeling to laugh at parts of this film, and yet it also feels like the most real and natural reaction.

Incidentally, the literal translation of the French title is “It took place close to your home.”

Why to watch Straw Dogs: Peckinpah’s signature slow-motion death ballets with nary a horse or cowboy hat in sight.
Why not to watch: In Peckinpah’s world, sometimes rape is enjoyable for everyone involved.

Why to watch C'est Arrive Pres de Chez Vous: The friendliest killer you’ll ever meet.
Why not to watch: This is not a world anyone wants to live in.
Posted by SJHoneywell at 11:53 PM