How I Spent St. Patrick's Day 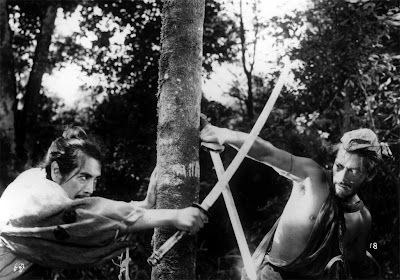 So here it is, St. Patrick’s Day, and I couldn’t think of a better way to celebrate a day near and dear to the Irish Catholic better than to watch a black-and-white Japanese film directed by the great Kurosawa. I’ve seen a few Kurosawa films in my day, but this one has always eluded me until now. This wasn’t by design, but by chance. I like Kurosawa in general. Kumonosu Jo and Shichinin no Samurai are rightly regarded as classics. The same is true of Ikiru and Ran, which I haven’t seen yet. Rashomon is as well, and just as rightfully. The only way to discuss this film is to spoil it, so consider the rest of this commentary as being under a spoiler warning.

The story is a relatively simple one. A terrible murder has been committed, and no one seems to understand exactly what has happened. In fact, we are told the story of the murder four different times from four different points of view. We hear from a bandit (Toshiro Mifune), the murdered man (Masayuki Mori), the samurai’s wife (Machiko Ky), and a woodcutter (Takashi Shimura). More than this, though, because the entire film is actually told as a flashback. Three men, the woodcutter, a priest (Minoru Chiaki) and a commoner are sitting in a ruined temple (called “Rashomon”) out of a rainstorm when the woodcutter starts his tale.

The bandit, Tajomaru, tells his story first. He confesses to the murder of the samurai and to raping the man’s wife. He watched the pair go by him, the samurai walking and the woman on a horse. A small gust of wind revealed her face beneath her veil, filling the bandit with intense desire, subtly implied by his sword moving from point down to point up after she has ridden past. He tricks the samurai by telling him of a hidden cache of weapons nearby. Once the two are isolated, he overpowers the samurai, ties him up, and returns to the wife. He takes her back to her husband, still tied to a pine tree, and there he has his way with the woman in full view of her husband. She, shamed by this, asks Tajomaru to release her husband. The two fight, and Tajomaru bests the samurai, killing him.

Tajomaru is a fascinating character and a creation of Mifune’s genius. His frantic laugh and constant slapping at insects paints him as both on the border between sanity and insanity as well as something dirty and foul. The others ignore the insects—or are perhaps ignored by them—while Tajomaru constantly slaps at them and scratches. It’s also worth noting that in his version of the story, the wife essentially consents to the rape after a few moments. The samurai also tends to retreat from attack and swings wildly, making him something considerably less than the typical image of a fierce warrior. It is no mistake that the battle between the two resembles the battle between Tajomaru and the samurai’s wife.

We get the wife’s story next. She starts with her return to her husband tied to the tree. After the rape, Tajomaru runs away, leaving her with her husband. Her shame from the rape was so great that she believed that her husband was filled with a loathing of her so great that it could not be stopped. She releases him from his bonds, offers him the knife and asks him to kill her, but he refuses. She faints, and when she wakes up, finds that evidently, he has killed himself on her dagger. Despite her attempts since that time, she has failed to kill herself.

Next we get the story of the murdered samurai, who tells his story in court through a medium. In his version, Tajomaru stayed with the wife and tried to console her. The bandit argued that now that her honor was stained, she could no longer stay with her husband and she should leave with and marry him. To the samurai’s shame, the wife agrees to go with the bandit. However, she refuses to leave with Tajomaru until he kills the samurai, who is still tied to the tree. Even the bandit is shocked by this, and leaves the life of the woman up to the samurai, who claims that this mercy on the part of the bandit was enough for him to forgive the man. While he waits for an answer, the woman leaves, and the bandit gives chase, leaving the samurai. Eventually, Tajomaru returns, releases the samurai, and tells the man that his wife has run off. He finds the wife’s dagger and uses it to commit seppuku.

After each of these three versions of the story, we go back to the ruined temple and the three men. Each time, the woodcutter claims that the stories are all lies, and that he knows what really happened. After the samurai’s tale, he states definitively that there was no dagger and that the samurai was killed by the sword. The woodcutter claimed earlier that he only found the body, but now, it appears that he saw the entire crime. Instead of getting involved, he kept the story to himself.

As it happens, he didn’t find the body, but found the entire tableaux—the woman crying, the samurai tied to the tree, and Tajomaru. According to the woodcutter, Tajomaru was begging for forgiveness from the woman and begging her to leave with him. She is inconsolable, though despite his promises of great wealth. He offers to give her anything, even to the point of working for a living if she wants him to, and if she does not consent, he’ll have to kill her. She won’t answer him, though, except to say that she has no say in anything. Instead, she frees her husband and goes back to crying. Tajomaru is ready to fight, but the samurai says that now she is no longer worth fighting for.

Instead, he suggests that she kill herself because of her shame. The samurai tells his wife and the bandit that she can go with him, calling her a shameless whore. Instead, the bandit starts to walk away, deciding that he no longer wants her either. The samurai berates her some more, and the bandit attempts to defend her. She stands to defend herself. She dresses her husband down, claiming that if he were a real man, he’d kill the bandit and then demand she kill herself. She turns on Tajomaru, saying that she wanted out of her marriage in the first place, but he proved to be just as passionless as her husband. And so, the two fight, but do so incredibly incompetently because both men are truly cowards. Interesting that again, there is a call back to Tajomaru’s version of the fight, this time with both of the men in the role of the woman. The bandit finally kills the samurai, who begs for his life, and the wife runs off.

And so, the question must be asked: is reality what we see or is it what we believe? Or, possibly, is it what we remember? Rashomon asks all of these questions and provides no answers. Whose tale is the most accurate? We aren’t ever told, and we never will be told, since we only have the four different perspectives, each one completely different from the others. We can never know what really happened because we weren’t there. In fact, Kurosawa seems to be saying that we can’t know what happened even if we were there.

Rashomon is exceptional because of the questions it asks. While the woodcutter tries to make sense of things and the priest attempts to rationalize his faith in humanity against the four stories he’s heard, the commoner seems to have the only appropriate response—laughter because this is simply the way the world works and we each of us make our own reality. At the end, an abandoned baby cries in the temple, and the commoner steals the baby’s kimono. It is the woodcutter who defends the child and calls the thief’s morality in question. So, perhaps despite the extensive lies and unreliability, goodness still does exist, but only individually. And even the woodcutter is a liar, since the thief confronts him at the end. It was the woodcutter who stole the woman’s dagger, but his acceptance of the abandoned child at the end redeems him. Or does it?

Ultimately, no one is reliable. And thus are the genius of Kurosawa and the brilliance of Rashomon.

Why to watch Rashomon: Regardless of how fantastic the story, few films have approached how the world truly works as thoroughly and beautifully.
Why not to watch: You’ll never know what really happened.
Posted by SJHoneywell at 4:07 PM