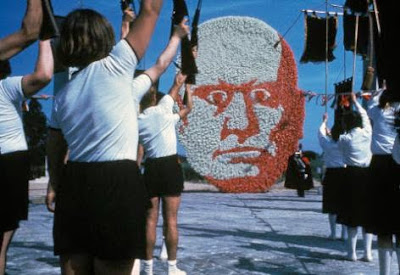 If you love film, at some point you’re going to run up against the catalog of Federico Fellini. Love him or hate him, you have to know him. You can’t know the novel as a form without some familiarity with Dickens, you can’t discuss Cubism without having a vocabulary that includes Picasso. And you can’t pretend to know anything about film if you haven’t spent at least a little time in the magical (and sometimes not so magical) worlds of Fellini.

Amarcord is perhaps Fellini’s most accessible work. It’s also virtually plotless, following a year of life in Italy around the rise of fascism. And while the fascist movement does make an appearance, and is at the center of one of the only really unpleasant moments in the film, it essentially doesn’t mean much in the final analysis. The movie is based on Fellini’s childhood at least in part, although he denied that it was truly autobiographical. It takes place in a small seaside town based loosely on Rimini, the town of Fellini’s childhood.

The film opens with the appearance of the puffballs, evidently a seed of some type, similar to the springtime appearance of dandelion fluff. The townspeople say that when the puffballs appear, winter is soon at an end, and the town celebrates with a massive bonfire and the effigy burning of the old witch winter. We then follow a year of life in the town, focusing primarily on the life of Titta, a young man; his parents; a few of his other relatives; several of the townsfolk; and a number of his schoolmates. The film follows Titta, et al. through a year, ending with the return of the puffballs the next year.

Amarcord reminds me very much of Ray Bradbury’s Dandelion Wine. Essentially, it is less a coherent, complete story than it is a loose collection of vignettes with a common group of characters. These characters, certainly drawn at least in part from Fellini’s life, are nonetheless caricatures. For instance, Volpina, either the town prostitute or simply the town slut, is so greedy for sex that she’s all but pleasuring herself walking down the street. The blind accordion player does his best Ray Charles whenever the music strikes him. Gradesca (roughly translated as “appreciation”) is the town’s beauty, and she knows it, appearing in most scenes in a red coat and dress, and always at least partly in red in every scene. She is the woman the boys, Titta especially, moon over.

While some of the events of the film are unpleasant or sad, this is a time that is viewed not so much with a nod toward realism, but through the hazy warm glow of nostalgia. There is a magic here, a sense of unreality, as Titta and his friends attempt to come of age in a time that is remembered only indistinctly. There is a wistfulness even in the sadness, and a carnival-like feel to everything.

This is perhaps most evident in the scene in which virtually the entire town rows out a few miles to witness the passing of a massive luxury liner. As the boat passes, the people cheer. Some cry, overcome by the majestic size and power of the Italian ship. But it is obviously a fake, a prop, a piece of scenery and stagecraft. It is, essentially, the same as this film—something that stands in for the real thing, and even looks at times like the real thing, but is not.

"Amarcord" translates as “I remember” in the dialect of Fellini’s hometown of Rimini. It is a lovely, heartfelt remembrance, if one not so concerned with telling literal truth.

Why to watch Amarcord: It’s joyously Fellini-tastic.
Why not to watch: No plot = big problem for you.
Posted by SJHoneywell at 10:54 PM