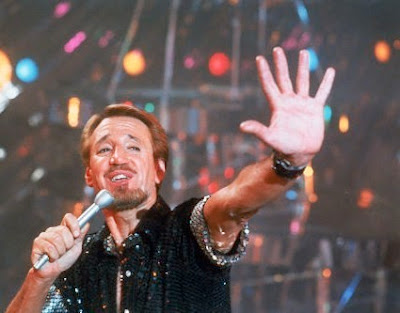 I mentioned yesterday that I’m not a big fan of musicals, and it’s true. I also said that I’ve been somewhat remiss in trying to get through the number of musicals on this list, and that’s also true. What I didn’t say was that this can cause some friction at home. Both of my daughters like being on stage. The older of my two girls is specifically a dancer, and is currently preparing for a show in a couple of weeks. It’s time for me to start plowing through some of these. I have to eventually, right? And if I don’t start now, then I’ll end up with six dozen musicals at the end.

So we’ll start with the vaguely autobiographical All That Jazz, a film by Bob Fosse about the life of Bob Fosse. It’s completely unflinching, which is what makes it worth watching. Fosse presents the life of stage director and choreographer Joe Gideon (Roy Scheider), warts and all. Gideon is a drinker, a womanizer, a workaholic, and a speed freak, surviving on Dexedrine, Visine, and nicotine.

The film is not the story of Gideon’s life, but rather his death. We watch him exhaust himself, overextend himself, and push himself to the point where he can simply go on no longer. Gideon is, in the world of the film (and mirroring Fosse in many respects) wildly successful in the world of Broadway. Because of this, he has something approaching carte blanche to do what he wishes at any time he wishes. Cheat on his girlfriend who he cheated with on his wife? Sure, why not? He’s Joe Goddam Gideon, after all!

But the life takes its toll. Gideon walks around the movie with a half-burned cigarette perpetually clutched in his lips. His morning routine involves classical music, Alka-Seltzer, Visine in both eyes, a shower, prescription dexies, and a final look in the mirror with jazz hands and the phrase, “It’s showtime, folks!” We see him never stopping, moving from one project to the next, demanding that he be better, be bigger, be more. He takes what he wants with one hand regardless of who is affected by it, and beats himself silly with the other. Late in the movie, an actor tells him that he understands Joe Gideon—he’s worried that he’s not special, that underneath it all, he’s really just ordinary like everyone else. That sentence or two encapsulates the entire film.

Gideon is in constant contact with his ex-wife Audrey (Leland Palmer), his current girlfriend Kate (Ann Reinking, who is essentially playing herself from Fosse’s actual life), and his daughter Michelle (Erzsebet Foldi, in her only film role). Since he is who he is, he is badly hurt when it becomes evident that Kate isn’t faithful to him, but has no remorse for his own lack of fidelity to her. In short, Gideon is not so much a complicated dude as he is just a talented, selfish bastard.

Much of the film takes place somewhere between life and death, as Gideon talks with Angelique (Jessica Lange), who is, for lack of a better term, the angel of death. As Gideon’s health deteriorates, he spends time discussing his life with Angelique, having a few full-blown Fosse number hallucinations while lying in his hospital bed.

I don’t like musicals. I really have a problem with them in general, but All That Jazz is a wow from start to finish. The numbers are good, surreal and bizarre and beautiful (and I love Ben Vereen as the emcee of Gideon’s death trip). Even more astonishing to me is the brutal honesty with which Fosse looked at his own life. Fosse based this film off his own heart attack in 1975, he made this movie and lived another six years after baring his soul and faults to the world. That’s why it’s great. To paraphrase the narrator in Fight Club, that sort of honesty makes me go a big rubbery one. 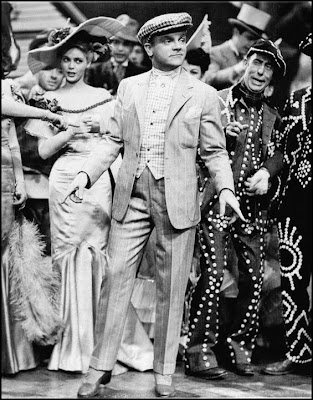 On the other end of the biopic spectrum we have Yankee Doodle Dandy, the film autobiography of George M. Cohan. It’s the sort of film that, if you didn’t know going in that it had been significantly sweetened for an audience, you’d figure it out pretty quickly. George M. here might as well be starting his name with “Saint” for the life that’s depicted on the screen, or have had the screenplay penned for him by Horatio Alger.

We follow this rose-colored view of Cohan’s life from start to the middle of World War II, mostly in flashback. At the start, Cohan has begun a new stage play about the current occupant of the White House, and after the opening performance, he is summoned to Pennsylvania Avenue for a heart to heart with FDR. From here, Cohan (played as an adult by James Cagney) spins the tale of his life for the president, going through his family’s routine on Vaudeville, his failure to get his plays produced initially, and his eventual booming success on Broadway and just about everywhere else.

There aren’t a lot of failures to moon over, but the ones that do exist are treated like the sort of minor stumbling blocks that befell Judy Garland and Mickey Rooney in a couple of dozen mid-1940s movies, with the “Hey, gang! Let’s put on a show!” mentality as a bounce back from tragedy. Can’t get someone to produce his play? Well, by golly, he’ll show them! All it takes is pluck and determination! Cohan writes a stinker? By golly, he’ll admit it in a self-effacing telegram sent to all of the newspapers!

It’s a bit overbearing, really. Cohan is a firecracker short of being a full-on fireworks display according to this film, and that’s all well and good, but at some point, I’d like to see something that approaches realism in any stretch of the imagination. Nobody is that all-fired plucky all the damn time.

This may simply be my distrust of the typical musical talking here, but I found the film to be the weakest when it excerpted scenes from some of Cohan’s plays. His ability as a dancer and actor, etc. is great, but I don’t need to see half of “Yankee Doodle Boy” to understand the play was a hit. The film is far better in the non-staged scenes, because then at least it doesn’t feel like I’m getting Americana dumped on me. This is especially true at the very end—the last five or ten minutes are a full dousing. It’s a patriotism bukkake (if this is a term you don't know...please don't Google it. If you do, don't blame me).

The saving grace of the film is James Cagney in the title role. The man goes for it, and while he’s best known for gangster films, the man could cut a rug. He’s no Astaire, and he’s no Gene Kelly, but he dances with his own distinctive stiff-legged style, and there’s not an ounce of guile in the man. He, at the very least, is a joy to watch.

Why to watch All That Jazz: The reality of what life on the stage is really like, at least from one perspective, and for those worried, it’s surprisingly non-fabulous.
Why not to watch: It’s frequently unpleasant.

Why to watch Yankee Doodle Dandy: Cagney.
Why not to watch: If you’re close to diabetic, this film will push you over that cliff.
Posted by SJHoneywell at 10:12 PM