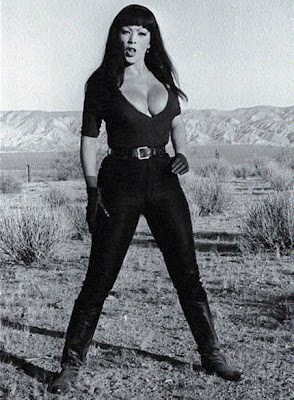 There’s a certain male mindset that I don’t understand. Russ Meyer understood it, mostly because he was a victim of it himself, evidently. This mindset that I don’t understand is an attraction to really scary women, the kind who are not merely capable of killing a man for fun, but who are happy to do it just for the kicks. It’s evidently a common thing, though. It seems to explain about 80% of Quentin Tarantino’s movies.

A prime example of this mindset is Faster, Pussycat! Kill! Kill! by “auteur” Russ Meyer. Allegedly, Meyer gave the film this name because it contains everything he wants in a picture: speed, sex, and violence. And a weird little collection of speed, sex, and violence it is, let me assure you. It’s a world populated by fast little cars, women wearing next to nothing, and sex fiends of both genders. Interestingly, it also seems to presage such “creepy people in the middle of nowhere” films as The Texas Chainsaw Massacre and The Hills Have Eyes.

We start with a voiceover accompanied by a visual representation of the sound waves. This voiceover is all about the problems of youth and violence, violence in the guise of shapely, beautiful…WOMEN! And from here we jump cut to a trio of go-go dancers. These girls are our heroines. They are Varla (the awesomely named Tura Satana), Rosie (Haji, who is either the source of all super-fake Italian accents or the victim of the same), and Billie (Lori Williams). They drive off to the desert for no real reason other than to blow off some steam. It is here that they come across Tommy (Ray Barlow) and Linda (Sue Bernard). Tommy is in the desert to run some time trials on his car with Linda timing him. Unfortunately, Varla, Rosie, and Billie aren’t going to let it happen. They end up attacking the pair, and Varla kills Tommy.

The trio kidnaps Linda and drives away, trying to determine what to do next. In a little Podunk town, they locate a family that’s contending with its own demons. The old man (Stuart Lancaster) is in a wheelchair thanks to a train accident. His two boys are completely different. Kirk (Paul Trinka) is an intellectual while the big one is just called The Vegetable (Dennis Busch).

It’s pretty evident that things are hinky here right away. Some things have already happened here, and the old man has the hots for Linda. This is something he’s done before, because he talks about hiding her body out in the desert when he’s done with her. Fun! Really, it’s just a bloodletting and meat hook away from living next door to Leatherface and kin.

But let’s be honest here. This isn’t a movie anyone watches for the scintillating dialogue or the riveting story. This movie was (and is) watched because Varla, Rosie, and Billie are barely in their clothing at all times. Varla is barely contained by her leather top. She’s a shrug and a hiccup away from exposing 18 pounds of mammary. The bulk of the audience, of course, is hoping against hope for that shrug and hiccup. If the film were to be made today…well, she’d just be constantly topless, and you’d be able to watch it every night between 11:30 and 1:00 am on Cinemax.

Frankly, these women scare me. Rosie needs to take diction lessons. Billie needs to stop drinking and put on pants. And Varla…geez. She’s terrifying. I can kind of understand why men might want a taste of that particular well, but not me. I prefer my women smart and safe, not a whim away from lopping off my manhood for a lark. But all that said, I don’t really begrudge them what they did to Linda. Seriously, with her little bikini and hair bow, she’s right out of a Gidget movie. I’d want to slap her, too. 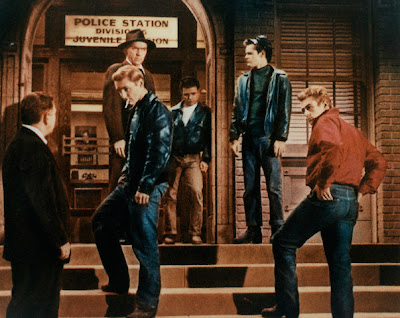 Of course, not all rebellious youth movies are exploitative and trashy. At the other end of the spectrum is the classic Rebel Without a Cause, noted primarily as being one of James Dean’s only films. And this begs a serious question about this film. If we presume for a moment that James Dean didn’t die in a car crash after making only three movies, that he made perhaps three dozen and died of a heart attack at age 65, would anyone still care about this movie?

The simple answer is that people would still care about this movie because of what it is. We’re introduced to most of our major players almost immediately. Jim Stark (Dean) is drunk and wandering around town extremely early one a morning near Easter. He’s dragged into the police station where we are introduced to Judy (Natalie Wood) who has run from home because of the way her father treats her. Also at the police station we meet John, better known as Plato (Sal Mineo), who is in trouble for shooting puppies.

We spend most of the time initially with Jim, who has a bucket of problems. It’s a classic case of teen angst before there ever was a word for it. His parents fight constantly. His dad (Jim Backus) is a pushover and his mother (Ann Doran) is a constant nag. Jim isn’t a bad kid. He just wants some part of his life to make sense, and he’s at an age where nothing ever makes sense. The only thing that does seem to be working for him is the cop (Edward Platt, best known as the chief from Get Smart), who appears to take an interest in keeping the kid out of too much trouble. He seems to understand exactly what Jim is going through.

It’s a Hollywood coincidence that Jim’s new house (the family moves because Jim is constantly in trouble) is next door to Judy's, and the two seem to hit it off immediately. But seem is the operative word here. Judy runs with a tough crowd, and they dislike Jim right away. In particular, the leader of this gang, Buzz (Corey Allen), really dislikes Jim. And Buzz is Judy’s boyfriend.

At a school field trip, Buzz decides to get under Jim’s skin, going so far as to puncture one of Jim’s tires with a switchblade. This culminates in a little knife fight between the two, and while Jim is getting the worse of it, he wins by knocking the knife out of Buzz’s hands. Buzz has some respect for Jim now, but still doesn’t want to let him off the hook completely. He challenges Jim to a game of chicken that night on a bluff overlooking the town.

The game is a little different than a traditional game of chicken. In this game, the two participants drive stolen vehicles toward the edge of the cliff, jumping out before the car goes over. The first one to jump is the loser. Jim does pretty well in the contest, but Buzz’s leather jacket gets caught on the door handle of his car, and he goes over the cliff with the vehicle, smashing onto the rocks below. And if Jim thought the teen gang was after him before, they’ve really got it in for him now. In the meantime, Plato has developed something between a crush on Jim and hero worship of him. Plato lives with a maid, and has been all but abandoned by his mother and father.

In addition to being one of James Dean’s only films, Rebel Without a Cause is the first film in Dennis Hopper’s strange and rambling career. It’s worth noting as an aside here that I had the opportunity to meet Dennis Hopper a number of years ago. I had lunch with him, and he was an absolute sweetheart of a person. We’ll see him a number of times in the films ahead, and I figured I should get this out there now—I’m a big fan of Dennis Hopper, not because of his film roles or his acting skill, but because he was a genuinely nice person who treated me with a lot of respect and kindness.

So what’s so special about this movie? It’s really the classiest film of its kind. The story is nothing special, but the characters are. The plot is one you’ve seen a dozen times or more, but Rebel did it first and best. Everything from scenes in Edward Scissorhands to Aragorn’s tumble over the cliff in The Two Towers references this film, and with purpose. It’s beautifully filmed and acted, and heartbreaking to watch unfold. The climax becomes inevitable, perhaps, but it’s still an exciting thing to watch, and pulls the right strings to stay gripping no matter how much you see it coming.

Jim doesn’t have the words to express how he feels, and that’s part of the magic here. Rather than giving him words beyond his character’s years, the scriptwriters were smart enough to make him verbally impotent and reliant on deeds instead. It’s improbable in that pretty much everything takes place on a single day, but that’s easy enough to forget in the watching.

Why to watch Faster, Pussycat! Kill! Kill!: You can learn the tensile strength of a leather bustier.
Why not to watch: Do I have to go there?

Why to watch Rebel Without a Cause: You’ve only got three choices when it comes to seeing James Dean, and this one is iconic.
Why not to watch: Your opinion has been sullied by inferior versions of the same story.
Posted by SJHoneywell at 8:50 PM