It’s April Fool’s day, which means that I’m watching comedies, right? Well, April Fool, constant reader, we’re watching weird stuff from other lands. Comedies would be far too predictable for this day. Anyway, there’s a need for me to continue watching films that are new to me and foreign films as well. 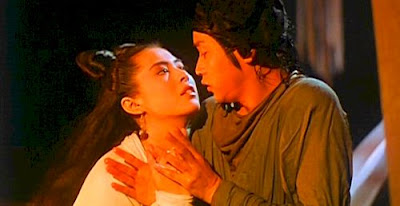 We’ll start with Sien Nui Yau Wan, known as A Chinese Ghost Story in the U.S. This film is based on a traditional and popular Chinese folk tale of a young man and a ghost who fall in love. The man, Ling Choi Sin (Leslie Cheung) is a debt collector who ends up spending a night in a haunted temple. There he meets Lit Sin Seen (Joey Wang), who is a ghost in the service of a powerful and evil tree demon.

The tree demon needs the flesh of men to stay powerful, so it is Lit’s job to lure men to their doom. Additionally, the tree demon has promised Lit in marriage to a much more powerful demon, and the wedding is in three days. Ling falls for the beautiful ghost, though, and wants to save her from her terrible fate. To do so, he must face all of hell with the help of a Taoist swordsman named Yin Chek Hsia (Ma Wu).

What follows is a film that either wants to be everything to all people or can’t decide on what it truly is. Is it a romance? Yes. Is it a martial arts film with amazing stunts and effects? Yes. Is it a comedy? Yes. It plays very much like an homage to early Sam Raimi films, particularly the first two Evil Dead films throughout. Some of the effects are wonderful. The black demon, for instance, when pierced with a weapon, reveals hundreds of disembodied heads beneath his cloak. These fly out and attack the group in a scene that is a bit disturbing.

What really doesn’t work is most of the comedy. It doesn’t blend as seamlessly into the rest of the film the way it does in Raimi’s work, and the comedy especially feels like a harkening back to much of what Raimi has done in the past. Whether that’s intentional or simply a merging of two similar styles, I can’t tell. Some of the pieces are funny, but they just don’t seem to blend well with the story the film is telling.

The stunt work is tremendous, though. It’s important to remember that while in this day and age, a lot of what we’d see in a film like this would be CGI or similar trickery, this is all real stunt work performed by real people. Much of it is wonderful to watch and performed beautifully throughout. The battle sequences, and the traditional “people flying through the air with swords” expected in Hong Kong films are certainly here, and they are beautifully done as well.

I’ll grant that it’s a good story—it was a popular Chinese story for a reason, after all. But I’m completely flummoxed as to how this ended up on this list. It’s fun, but I have no desire to ever watch it again, and see no need to watch it again. There wasn’t enough there. There are other more interesting ghost stories in the world (El Espinazo del Diablo, for instance), and more interesting martial arts films (Crouching Tiger, Hidden Dragon) to make this anything more than a simple curiosity. Sorry Hong Kong cinema; your actors may fly, but the film doesn’t.

It’s worth noting that the English subtitles on at least the version that I had are ridiculously terrible. Sometimes, it was easier to try to just follow the action on the screen than to try to parse the Engrish along the bottom. 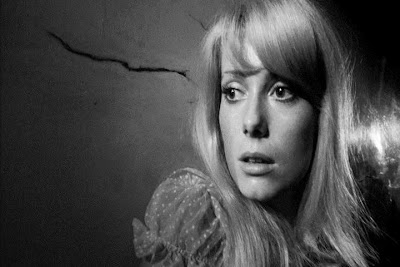 Repulsion is a whole different story. While the film is in English, it feels very much like a foreign film. This is in part due to the heavy accent of Catherine Deneuve, and in part due to the direction of Roman Polanski. It is his first English-language film, and it feels like it. That’s not necessarily a bad thing, but it’s a true thing.

The film tells the story of the meteoric descent into insanity of Carole (Deneuve). A Belgian girl living in England with her sister, Carole works in a spa doing the nails of women with enough money to spend their days in spas. Her sister Helen (Yvonne Furneaux) is the opposite of Carole. While Carole is shy, retiring, and timid, Helen is outgoing and sexually independent. She is in the middle of a relationship with a married man (Ian Hendry), who attempts to be nice to Carole.

However, Carole is incredibly repressed. While she has a boyfriend named Colin (John Fraser), Carole shrinks from his touch and almost refuses to talk to him. She frequently forgets dates with him because the idea of sex, let alone intimacy, terrifies her. Helen, on the other hand, has loud sex with her boyfriend in the apartment, forcing Carole to listen in.

Helen and her boyfriend go on vacation together leaving Carole home alone. And this is where things start to go wrong. Carole quickly spirals into a combination of depression and insanity, where every noise is a stalking predator and every thought is of rape and murder. As she spirals further and further into this mental quagmire, events get out of control, leading to a terrible but inevitable climax.

There are two things worth saying about Repulsion, both of them conscious choices by Polanski. First is that the film stock is incredibly grainy and at times difficult to watch. I’ve seen grainy films before (Clerks and Man Bites Dog spring to mind), but it bothers me a lot more here. I’m certain that Polanski had a reason to place the film on such stock—as Carole’s world becomes detached from reality, so too is our ability to accurately see what is happening made difficult. Okay, artistically valid, but that doesn’t make it easy to watch.

Second, this film is slow. This is actually the second time I’ve tried to watch Repulsion; I fell asleep the first time a month or so ago. When things happen, they happen suddenly and shockingly, but part of this shock is that nothing seems to happen for a really long time otherwise. For all of the rapidity of Carole’s descent into madness, it seems like we’re watching it in real time.

This isn’t unusual for Polanski. The Tenant worked very much the same way. I guess for a film that has been selected so often as such a dangerous and threatening film, I expected things to move faster.

Why to watch Sien Nui Yau Wan: A cool, traditional Chinese story.
Why not to watch: You’ve seen it all somewhere before, just maybe not all in the same place.