Films: Das Leben der Andern (The Lives of Others), The Conversation
Format: DVD from DeKalb public library (Lives), DVD from personal collection(Conversation), both on laptop. 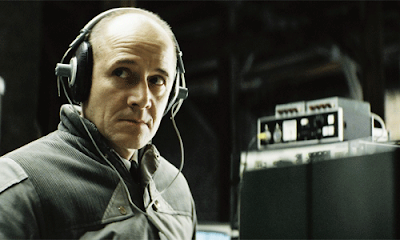 Unless completely avoidable, I don’t really want to add politics into this blog, but there are times when it will undoubtedly be necessary to bring them up. The first of today’s films makes the discussion of politics inevitable, since it concerns itself with socialism and communism. I suppose that by the end of this entry you’ll be aware of what my stance is, which probably can’t be helped. When I write, I’m something of an open book.

Das Leben der Andern (The Lives of Others) is a drama set in East Germany about half a dozen years or so before the fall of the Berlin Wall and the reunification of the country. East Germany at the time was full under the sway of socialism, and more specifically communism. The reality of this means that many people—anyone suspicious and most artists and similar creative types—are under surveillance at all times by the Stasi, the East German secret police/KGB equivalent.

We spend the bulk of the film with two main characters. The first, Hauptmann Gerd Wiesler (Ulrich Muhe), works for the Stasi doing surveillance of people suspected of thinking, acting, or otherwise working against the East German government. He is soon made aware of the only author not currently being watched, a playwright named Georg Dreyman (Sebastian Koch). Dreyman is not being watched despite his influence (he’s even read in the West), because it is evident in his writing that he truly believes in the socialist state.

Despite this, Wiesler is put under watch by Minister Bruno Hempf (Thomas Thieme). Wiesler spends days essentially living his life through what he observes in Dreyman’s apartment through bugs and phone taps. He discovers several important things. First, Dreyman truly does believe in the socialist state. He is not hiding subversive thoughts or tendencies, and his plays really do support the ideas he holds true to. Second, Wiesler discovers that the relationship between Dreyman and his girlfriend Christa-Maria Sieland (Martina Gedeck) is intimate and passionate. Third, and most disturbing, he discovers that Minister Hempf desires Christa-Maria for himself, and wants Wiesler to frame Dreyman so she will be freed up and forced into a relationship with him. When Dreyman does start doing something that the Stasi isn’t happy with, Wiesler must make an even more difficult decision regarding his actions.

What we have, then, is a crisis of conscience for Hauptmann Wiesler. Does he do what he is asked by his superior, going against his ideals of communism, or does he disobey his orders, putting himself in jeopardy by remaining true to what he believes is right? This question could easily be asked in any other setting, and is frequently asked in film. What makes this film compelling and worth watching is the setting itself because it is so unfamiliar to us. Just as much at question here beyond Wiesler’s actions is in fact the morality of the surveillance itself. Many will claim that the current political administration is doing exactly this—moving us more and more toward socialism and this sort of oppression. It’s worth reminding those people that it was the previous administration that allowed for warrantless wiretaps—essentially the kind of surveillance occurring in the East Germany of this film.

The question is not really the legality of the surveillance or the oppression it implies. Rather, the real question here is the abuse of power and where this constant surveillance leads. Anyone—the East German Stasi or the American politicians who defended the practice of wiretapping as required for the protection of the American people—can justify whatever they wish. What they cannot justify is that such information can and always will be used not for the good of the state, but for the private gain of those in possessing it.

Ulrich Muhe owns this film. His expression rarely, if ever, changes throughout the film, and yet he conveys a great deal of emotion with his face throughout the film. Years of living and working under the state machinery have left him appearing passive, a facial expression George Orwell describes in 1984 as a sort of benign optimism as a facial neutral. And yet, through that expressionlessness, Muhe shows a great deal of longing, pain, and desire. He wants to be needed and loved, his position prevents that sort of emotional attachment, and so the desire burns in him just barely visible under the surface. It’s easy to show longing. It’s difficult to show that much passion while pretending to be emotionless.

I did guess how the film would end, but only moments before the actual event. While I did predict accurately, this in no way reduced the power or the poignancy of that ending. At the risk of sounding trite, the ending is uplifting and beautiful. 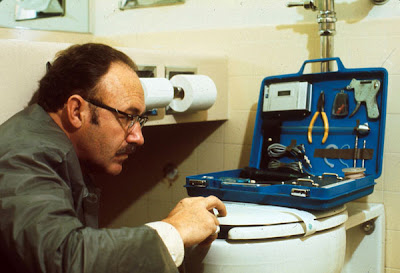 Francis Ford Coppola’s The Conversation works with the same themes and ideas, or, since this film is a good three decades older, it blazed a trail into the lives of surveillance people that was furthered by Das Leben der Andern. Unlike the later film, this one takes place in the U.S., and doesn’t involve any government agents.

We start with what looks like Union Square. We see people milling around, music playing, and folks having a good time in general. As the camera pans around, we seem to be focusing on a couple walking aimlessly. We catch some of their conversation, but other pieces are broken up by what seems to be electronic interference. It soon becomes evident someone is taping them. Their conversation is being recorded from multiple positions around the park. The couple is Ann (Cindy Williams) and Marc (Frederic Forrest).

We are also soon introduced to Harry Caul (Gene Hackman), who is in charge of getting this recording for his mysterious employer. Harry is a sound expert, and makes most of his living doing surreptitious surveillance as a freelancer. He doesn’t concern himself too much with what he’s recording as long as he gets the entire conversation he’s being paid for. Perhaps because of the nature of his expertise, Harry is exceedingly private, not letting anyone in too close to him. This manifests itself in something that goes further than bordering on paranoia. When he finds a birthday gift in his apartment after the taping session, he calls the gift giver not to say thank you, but to find out how she bypassed his locks and alarm system.

The next day, we see Harry at work in his lab. He takes each of the different recordings of the conversation from the park and plays them back, making a master recording, carefully mixing out any other noise and background static, switching from one mike to another depending on the quality of each recording. As he does this, we get a flashback to the park and the locations of the different mikes, getting more of the conversation this time. This is a recurring theme throughout the film. As we get deeper and deeper into the plot, this conversation is played again and again, each time with a different meaning. It’s made apparent that the woman in the conversation is the wife of the man who hired Harry, and the other man is evidently her lover. This more than anything convinces Harry that something bad is going to happen to the two of them.

When Caul refuses to turn over the tapes to the assistant of the man who employed him (the assistant is played by a very young Harrison Ford; the director is played by an uncredited Robert Duvall), things start to get stranger. Harry is convinced that the two people he recorded are in danger. This causes real problems for him, because it is revealed that he was once involved in a similar situation on the East Coast, a situation that resulted in the deaths of two people. It was this that caused Harry to become the paranoid recluse he is, refusing to tell anything to anyone, hiding himself even from his girlfriend, Amy (Teri Garr).

It’s a fascinating world that is portrayed here, a private and disturbing little hell that Harry Caul lives in. Aside from his saxophone playing, the only thing he is really good at is surveillance, but the jobs are starting to tear him apart with guilt. As he gets deeper and deeper into the recording in question, his paranoia increases, and is pushed still further by the presence of another recording expert (Allen Garfield) who appears to be moving his operations from Detroit to San Francisco, which is Caul’s territory. This competitor makes a move at hiring Harry’s assistant Stan (John Cazale), further pushing Harry into paranoia. The end, the last 20 minutes or so, are absolutely shattering to Harry's psyche.

It is perhaps not too strange that in both films, the men in charge of getting information about other people are themselves obsessed with keeping their own private lives as private as possible. Perhaps it is the nature of the business, perhaps it is something about knowing exactly how vulnerable other people are at moments they believe are private but really aren’t. Whatever it is, these men live in a world where the only things more precious than the secrets of other people are their own secrets.

A few noteworthy things here—this film feels completely out of character for Cindy Williams, who is most famous for being the second half of Laverne and Shirley. She made a name for herself through most of her career in light comedy and other comedic fare, but here she is deadly serious. Interesting to think of what tracks her career could have taken if she’d found more roles like this one. Second, it’s a very different side of Gene Hackman. I typically think of him in both charismatic and bombastic roles: the coach in Hoosiers, the sheriff in Unforgiven, and of course Popeye Doyle in both French Connection films. Here he is socially inept, quiet, almost mildly autistic. If you think he didn’t have range as an actor, this movie will show you different.

Why to watch Das Leben der Andern: A familiar dilemma given a fascinating setting and characters.
Why not to watch: You’ll want to check your light switches and outlets for bugs.

Why to watch The Conversation: A fascinating descent into paranoia.
Why not to watch: It’s entirely possible that paranoia is communicable through film.
Posted by SJHoneywell at 10:48 PM