Film: The Man Who Fell to Earth
Format: DVD from Musser Public Library through interlibrary loan on laptop. 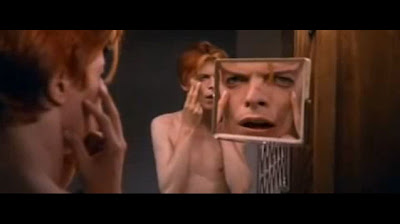 Sometimes people appear to be born to play a particular role. Sometimes, this is simply because of a long association with a style or type. It’s difficult to imagine someone else playing Indiana Jones, for instance, so someone other than Humphrey Bogart playing Sam Spade. Other times, it seems like the role was written with a specific person in mind. Such is the case with the role of Thomas Jerome Newton in The Man Who Fell to Earth. There cannot be another person better suited for this role than David Bowie.

Newton is an alien who has come to Earth in search of water. His world is dying, and he has been sent to make enough money to rescue his own world. Bowie himself is so otherworldly in appearance that not much needs to be done to make him perfect for the role. With his slow, careful gait, mismatched eyes, almost disturbing thin frame, and shocking red hair, he is instantly evident and out of place everywhere he goes.

The first thing we really see of Newton, he is selling a gold ring for $20, a ring he claims he got from his wife. It looks like a moment of desperation, and it is followed by a much worse one—Newton scoops up water with a tin can from what looks like run-off from an industrial site and drinks it. As he does, he pulls out a massive roll of bills and a huge collection of identical gold rings.

Newton has arrived on Earth with a massive collection of new inventions—nine basic patents according to his new lawyer Oliver Farnsworth (Buck Henry), which should be worth more than $300 million within a few years. As we learn of Newton’s impending fortune, we also get glimpses of a man who will become a major player in this story, a chemistry professor named Nathan Bryce (Rip Torn). Bryce, as we see in a mildly disturbing montage, is more interested in bedding young undergraduates than doing much else. He is, however, intrigued by a new company called World Enterprises, headed by the reclusive Thomas Jerome Newton.

The fourth player in this little drama is Mary-Lou (Candy Clark). A former housekeeper in a New Mexico hotel, it is she who first sees how truly fragile Newton really is. An elevator ride in the hotel knocks Newton flat and she gets him into his room, takes care of him, and introduces him to the pleasures of a large glass of Beefeater’s gin. (While it’s never really spoken aloud in the film, much of Newton’s implied fragility and much of what Bowie does in terms of movement throughout the film is because of much lower gravity on his home world. It’s a subtle and impressive piece of acting from a debut performance.)

The story of a man coming from another world to save his own planet might make an interesting story, but it almost certainly needs more. So, there’s more here. Newton’s goal is to save his own world, which we see in flashback and visions is a desolate world nearly destroyed. But it is a goal that he cannot, does not, and will not realize, not because of the difficulty or problems, but because of his own failings. Newton becomes a man unable to move on, unable to act in any meaningful way. The job of saving his world becomes simply too much for him, and he sinks into what essentially feels like ennui with no possible way out. Newton is so crushed by the weight of his worlds, he cannot continue.

And it’s both literal and figurative weight. From his home world, the fate of his wife, children, and people depend on his returning with water. On Earth, the oppressive gravity breaks him down physically, wearing him out, and both weights are impossible for him to break away from. Newton is tragic because of this, and pathetic as well. Of course it doesn't help that he is easy prey for ruthless and vicious businessmen (particularly Bernie Casey) blinded by their own greed.

Thus we have the name of both the film and the book it was based on. Newton did literally fall to Earth from the heavens. He also “fell” in the sense that from the high perch of his technology and generated cash, his life essentially comes to nothing.

Not everything is specifically what you might expect here. Science fiction films tend to have a lot more in the way of laser battles with aliens, spaceships zooming around Pluto, and obvious bad guys for the hero to battle in a climactic sequence. Not so much here. This is an existential drama. Newton fills up his life with booze and a bank of televisions, overloading him with sensory experience in an unsuccessful attempt to destroy his inner demons.

There’s also a surprising amount of sex, including gooey alien sex on Newton’s homeworld. I’m no prude, but I’m not sure I was entirely ready for a naked, sweaty Rip Torn cavorting with a coed. There’s an image that will stay with a person, a little nightmare fuel to disturb one’s sleep. Only slightly more disturbing is the gooey alien sex and Candy Clark literally peeing herself when she sees Newton’s true alien form.

Why to watch The Man Who Fell to Earth: Pain, hope, misery, and existentialism with a sexy science fiction coating.
Why not to watch: More artsy than most science fiction fans want their alien stories.
Posted by SJHoneywell at 11:06 PM

Email ThisBlogThis!Share to TwitterShare to FacebookShare to Pinterest
Labels: drama, Nicolas Roeg, science fiction, The Man Who Fell to Earth