The Times, They Were a'Changin' 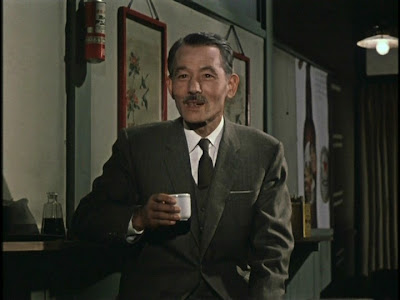 Eventually, every great director makes his or her last film. Kubrick’s career ended, Hictchcock made a final film, and someday so will my current favorites, Danny Boyle, Guillermo del Toro, and David Fincher. I bring this up because today’s film, Sanma no Aji (An Autumn Afternoon), is the last film in the distinguished career of Japanese film maker Yasujiro Ozu.

It’s easy to think of Japanese films as falling into one of three categories: monster movies, martial arts movies, and samurai movies. That’s the equivalent of saying that the entire American film industry consists of nothing more than blockbuster action films, horror films, and remakes. It may feel that way sometimes, but it’s far from the truth. Sanma no Aji is a domestic film about life in post-war Japan and the changes in the culture. More specifically, it’s about how those changes affect the people living in that society.

Shuhei Hirayama (Ozu regular Chishu Ryu) is an older widower, a veteran of the war, who lives with his daughter (Shima Iwashita) and son Kazuo (Shinichiro Mikami). His older son, Koichi (Keiji Sada) is married, and has a difficult relationship with his own wife. Shuhei isn’t sure he wants his life to change, but he is encouraged by his friend Kawai (Nobuo Nakamura) to get his daughter married off before it becomes too late for her and she turns into an old maid. Shuhei is convinced that she isn’t ready for marriage despite the fact that other women of her age are getting married. She is equally convinced that her father and brother would not survive without her assistance.

At the same time, we learn of Koichi’s relationship with his wife, Akiko (Mariko Okada). Koichi very much wants to have a traditional wife, but she talks back to him and doesn’t let him do what he wants. Shuhei’s friend Horie (Ryuji Kita) has a new young wife who he claims makes him happy, but she seems to rule the household and keeps him in line. Additionally, the men reconnect with one of their old teachers, nicknamed “The Gourd” (Eijiro Tono), who has an old maid daughter who he claims to have ruined by not allowing her to marry.

It would seem that this should be straightforward. Michiko is young and pretty, and there are plenty of marriage prospects for her. But Shuhei isn’t sure, she isn’t sure, and the portrait of marriage presented by the various matches in the film don’t seem to paint a rosy picture of wedded bliss. Shuhei wants his daughter to be happy, but he also doesn’t want her to go away from him. And so, the film is essentially about his decision of whether or not to allow his daughter to, more or less, grow up.

The world of Japan at the start of the 1960s is changing, and this film is a reflection of that change. Any change encounters resistance from a variety of quarters, here no more than the Hirayama family. Ozu reflects this in a number of ways, contrasting elements of the film with each other both to reflect constancy as well as change.

The soundtrack, for instance, is entirely western, and French in particular. At the very least, the music is not traditionally Japanese. Additionally, we are bombarded by images of the changing reality in Japan. We see, for instance, Koichi, who wants a traditional marriage and to rule his own home, happily standing in the kitchen cooking and wearing and apron while his wife brings home pre-made hamburgers for dinner. Change is occurring, and it cannot be stopped.

On the other hand, Ozu never moves his camera. While every scene contains a variety of shots and camera angles, in any given shot, there is not a single camera movement—no pans, no tracking shots, not a zoom or a pull back. Once a camera is placed, the scene does not move until it simply switches to another camera. In a sense, there is a sea of constancy amid the growing changes of Japan. Additionally, Ozu uses the older feeling 1.37:1 aspect ratio instead of a wider screen format, which gives the film in many ways a more traditional feeling. And throughout the film, the marriages talked about are arranged, as traditional as one can get. It’s almost cute as one man talks about being engaged to a woman whose hand he has held.

Sanma no Aji is a pretty film. It’s impossible not to like these characters and want them to make the decisions you know in your heart they should make. This film is charming and sweet, and I enjoyed it completely.

Why to watch Sanma no Aji: Sweetness and light.
Why not to watch: No monsters, karate, or samurai swords.
Posted by SJHoneywell at 11:37 PM