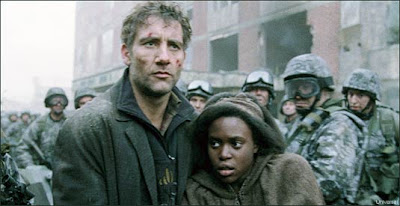 Let’s get this out of the way right away—I have no faith in Clive Owen as an action hero. While I loved the look of Sin City I absolutely despised the content. I thought Shoot ‘Em Up was a steaming pile. Both of these featured Clive Owen in the role of studly protector of the weaker parts of humanity. I hated both of those movies. I heard nothing but good about Children of Men, but I was not encouraged by this; plenty of people I know raved about both Sin City and Shoot ‘Em Up.

I love the premise, though, so at least we have that going for us. The premise is this—humanity is dying. It is now 2027 and no children have been born since late 2009 because humanity has become infertile from top to bottom, stem to stern. With the collapse of fertility, civilization has collapsed around the world. England is hanging on as best it can, but is enforcing a new policy, rounding up any and all immigrants, considering them illegal immigrants (called “foogees,” short for “refugees”) and deporting them.

Theo Faron (Owen) is a fairly typical guy holding down a job in the not-so-brave new world. He narrowly escapes a bombing at his local coffee shop on the morning that the world’s youngest person, the 18-year-old Baby Diego, was killed. This bombing is attributed to a radical group called The Fishes that is fighting for the rights of immigrants in England.

The next day, Theo is kidnapped by The Fishes, who deny their part in the bombing. More importantly to Theo, he discovers that the leader of the group is Julian (Julianne Moore), his ex-wife. Julian wants him to acquire transfer papers for someone for her, and she’s come to him because his brother Nigel (Danny Huston) has contacts in the government and can arrange it. Theo isn’t interested in the plan, but agrees when Julian tells him that The Fishes can pay him 5000 pounds. He makes the arrangements and meets his new charge, Kee (Clare-Hope Ashitey). Kee is pregnant, the first pregnant woman in nearly two decades.

Any science fiction movie relies on a number of things from its cast. First, it relies on a strong cast, something that fantasy and horror require as well. The key for films like this that plunge the viewer into a world of non-reality is for the cast to hop on board and buy into the film’s premise. More than other genres, science-fiction, fantasy, and horror can quickly become stupid. The buy-in is essential. Children of Men has a stellar cast, even figuring my dislike of Clive Owen in roles like this one. While Julianne Moore is not in the film much, she’s generally worth watching. I was also pleased to see Chiwetel Ejiofor, who I think is generally great and just as generally unknown or underrated. Just as important is the presence of Michael Caine as Jasper, Theo’s pot-addled mentor/friend.

What’s also required of films of this nature is a believable world that works on every level. Children of Men creates a desperate and terrible world, but one that logically follows from the premise of the film. That is priceless for science-fiction and speaks to the writing, the art direction, and the production.

It may seem like a little thing, but there are touches throughout this film that key up that verisimilitude. The British government, for instance, offers suicide kits for the populace, allowing them (to use the British slang) to snuff it peacefully and put less of a strain on the country, sacrificing self for the good of the rest. Realistic? Certainly—a lack of fertility to spiral thousands into crippling depression. Religious fanatics populate the country as well, and more to the point, there are various sects of fanatics, each pursuing their own way to salvation, repentance, and forgiveness. Political situations are tense, as things would be with a complete breakdown of society. It’s an ugly world, but it’s also a world that, given the premise, is at the very least plausible.

Theo's brother is another case in point. He reclaims great works of art, and reproduces others simply as testament to the human civilization now destroyed. When Theo arrives to see him, he is greeted by David, showing a bit of damage, and at dinner, the dining room table is dominated by Picasso's Guernica. Just as entertaining is the floating pig outside, recreating the cover to Pink Floyd's "Animals" album. This is exactly the sort of thing someone would do in a world descending into madness. Someone would protect that which was protectable.

It’s also worth noting this: there is a moment of true artistic statement in this film. Action films, and especially science-fiction action films aren’t supposed to do this, and yet Children of Men manages it in a truly staggering scene. Let’s go to the spoilers.

Kee has the baby, and must be escorted out of a skirmish. As she and Theo leave the building, gunfire stops. Everything stops. People see the first baby they have seen in 18 years and the guns fall silent. It is a powerful moment, and a reminder that even in the midst of chaos and death, life still has meaning and is still precious.

I was pleasantly surprised, even by the Clive Owen-iness.

Why to watch Children of Men: Apocalypse in 9/8.
Why not to watch: Well, there is that Clive Owen thing…
Posted by SJHoneywell at 11:54 PM