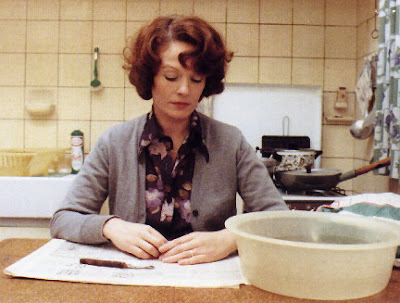 Let’s talk about art, shall we? Art, of course, is in the eye or ear of the beholder. The film Jeanne Dielman, 23, Quai du Commerce, 1080 Bruxelles (hereafter referred to as Jeanne Dielman simply for space reasons) is listed on virtually every top-20, top-100, and top-whatever list for great films. Critics love it. It’s packed with meaning, just like your morning breakfast cereal is packed with vitamins. It’s a masterpiece.

It’s also dull. Seriously dull. Oh-my-God-I-can’t believe-it’s-not-over dull. It’s like the film equivalent of the stereotypical daily life of an accountant. Boring things aspire to become Jeanne Dielman in their next lives. The film covers the life of the eponymous widow Jeanne (Delphine Seyrig) over three days, and it feels very much like real time. The film has a running time of a shade over 200 minutes, and it takes a full week to watch the thing, or at least that’s how it felt to me.

There is virtually no dialogue in the film. Instead, we watch Jeanne go through her daily routine. She cooks, she cleans, she straightens up her house that she shares with her son, Sylvain (Jan Decorte). She also invites older men into her home in the afternoon and has sex with them. The only way she and her son are surviving is Jeanne’s daily foray into prostitution.

Ah, your eyes got big for a second there. So did mine when I found this film on the library shelf. I wasn’t looking for anything particularly prurient, but it sounded sort of like a low-key Belle de Jour. Not so much, actually. It’s roughly as titillating as reading about wound care. Again, that’s okay—it’s obviously director Chantal Akerman’s vision, and I’m fine with that. It’s a great story idea—a woman who lives an ordinary, middle-class existence supporting her son by means of the oldest profession.

But (and you knew this was coming) that’s far more than Akerman shows us. We see Jeanne’s day. Literally. She cooks, cleans, takes in a client while the static camera (just as in Sanma no Aji from a few days ago) waits patiently at the bedroom door, bathes, makes her bed, sets the table, cooks dinner, and eats with her son. That. Is. It. We watch much of this in real time. For instance, on the morning of the second day, the camera plants itself in the kitchen about 10 feet behind the sink. We watch Jeanne wash the breakfast dishes in real time. She finishes up, pulls the plug, drains the water out of the sink, dries her hands, and walks off. Cut, end scene. Next scene? We watch Jeanne from the hallway as she stands in the kitchen and dries the silverware on a towel, then puts it in a drawer, again in real time. Akerman, evidently, has never come across the concept of a montage. Next, Jeanne makes her bed. This, in a magical moment, we get to see from two angles—one from each side of the bed. Next, hold onto your hat—Jeanne take some of her hooker money out of the tureen in the middle of the table and goes to the bank and waits in line. Bored yet? Try watching it. Guess what else? When Jeanne finally gets back to her apartment, you’ve still got more than two hours to go. At the end of the second day, there’s still 75 minutes of Jeanne’s daily chores to watch. And if you thought you couldn't contain your excitement the first time Jeanne washes the breakfast dishes, just wait until she does it again.

Through all of this, Jeanne’s life slowly spins out of control, but you need to be very sharp-eyed to catch this through the first two hours. She starts forgetting steps, or not completing what she normally does. It’s subtle, but in a film like this, it would have to be. Ultimately, everything goes kablooey. I’m going to put this under a spoiler warning, but I’m also going to be blunt here. Jeanne Dielman is far more interesting to hear about than it is to watch. Normally, I’d recommend skipping the spoiler if you haven’t seen the film. In this case, the tags are there if you want to avoid reading the secret mystical ending of this film, but feel free to dive right in.

*** TECHNICALLY SPOILERS, BUT READ THEM ANYWAY ***

After two days of cooking potatoes, going to the bank, shopping, and knitting a sweater, Jeanne experiences her first ever orgasm. In response to this, she stabs the man at least partially responsible in the neck with a pair of scissors. This is either the greatest epiphany of female empowerment ever conceived or the most ungrateful action ever taken. I’m not trying to sound like a sexist here, but…damn. That’s black widow spider cold. It should be noted, incidentally, that this unsexiest ever film sex and then brutal murder occur after we have watched Jeanne go about her day three times through more than three hours of footage.

Then, true to form, we watch Jeanne sit at a table and do nothing for about eight minutes.

Jeanne Dielman is the sort of film favored by pretentious art film wonks because of its deep meaning. It’s been called one of the first great feminist films ever made, and one of the most important films of the last century by enough critics and knowledgeable movie people to force me to sit up and take notice. It is, unquestionably, art. However, like the works of Modigliani and Joan Miro, it is art that I don’t like. The beret-wearing, clove cigarette-smoking crowd naturally scoffs at me, expounding over their espresso that perhaps I should content myself with something my pea-sized brain can handle, like America’s Funniest Home Videos. Bite me, artistic crowd. No discussion about this film’s importance, value, or lasting impact on the cinema is going to change the fact that it is a dull movie of a woman doing household chores and is roughly as interesting as flossing.

You are welcome to adjust your beret, sniff, and call this a grand statement of a woman’s struggle against banality and the male power establishment. I’d rather call it a cab and send it far enough away that I don’t have to watch it again. I seriously can’t imagine anyone ever wanting to watch Jeanne Dielman. It’s like a cinematic tetanus shot—possibly good for you, but painful for a very long time.

Why to watch Jeanne Dielman, 23, Quai du Commerce, 1080 Bruxelles: An artistic commentary on the banality of everyday life, the French-speaking equivalent of Britain’s “quiet desperation.”
Why not to watch: Would you enjoy watching me hang my laundry on a clothesline for three hours and twenty minutes?
Posted by SJHoneywell at 12:53 PM