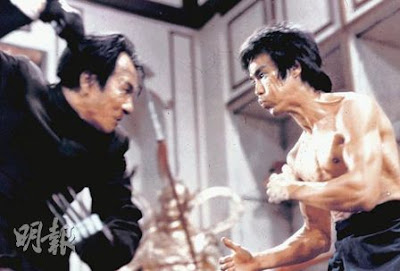 Ask people who the greatest cinematic martial artist in history is, and you’ll get one of two answers. Here’s a hint—no one ever says Jeff Speakman or Steven Seagal. Many will say Jackie Chan, and that’s not a bad vote. Many more will say Bruce Lee, which is certainly the more popular and classic answer. Chan is far more acrobatic and comedic than Lee ever was, while Lee appears more classically trained and straightforward. Chan is all about the amazing stunts and set pieces. Give him a set of nunchaku, and he’ll battle two guys for six minutes, doing wild and crazy stuff. Give them to Lee, and he’ll beat the snot out of 50 guys in a couple of minutes with one efficient strike on each one.

Lee’s most famous film is Enter the Dragon, and with reason. It’s not only a great film, it’s had tremendous influence on martial arts films and action movies since 1973 when it was first released. We start with an opening fight between Lee (Bruce Lee) and an uncredited Sammo Hung, who gets his butt stomped in short order. A short dialogue scene tells us that Lee has progressed in the Shaolin temple to the point where his skills are more than physical. He demonstrates this by espousing his philosophy both to his master and his student.

We also learn of a man named Han (Kien Shih) who has disgraced the Shaolin temple by involving himself in the drug trade. Both the British rule in Hong Kong and the temple would like Han taken out, and Lee is the man to do it. The British are represented here by Mr. Braithwaite (Geoffrey Weeks), who gives Lee the information he needs to know about Han. It’s worth noting, since it’s unintentionally funny, that Lee really can’t say “Braithwaite.” Regardless, Lee’s cover is that Han is holding a martial arts tournament, and Lee will be going.

As Lee sails out to the junk that will take him to the island of the tournament, we learn that he’s already got a connection to Han. Han’s bodyguard, Oharra (Robert Wall), killed Lee’s sister a number of years ago. We’re also introduced along the way to our two other heroes. Roper (John Saxon) is evidently some sort of businessman. He’s also a relentless gambler, owes hundreds of thousands of dollars to the mob, and is broke. He leaves for Hong Kong as a way to get away from his problems. We also encounter Williams (Jim Kelly), who is hassled by the police as he heads off to the tournament. Evidently, Kelly’s crime is that he’s tall, black, and going to Hong Kong. The three arrive on the same boat, and we learn that Williams and Roper evidently know each other from Vietnam.

What we find on the island is a stately pleasure dome run by Han. The competitors are wined and dined in preparation for the big tournament. Williams gets bored and goes exploring, as does Lee, although Lee’s exploring is more about finding out what is going on. Han decides to bump off Williams, tries to recruit Roper, and tries to make an example of Lee, which sets us off on a massive battle royale around the island that culminates in a fight between Han and Lee set in a hall of mirrors. Once the tournament really starts, it’s ass kicking from start to finish, and that’s really what you came to this movie for, isn’t it? We’re here to watch Bruce Lee destroy people quickly, painfully, and with a purpose.

The fight scenes, really, are great. There are several exceptional ones. The first, when Lee breaks out of his room and is discovered by guards, goes on for much longer than it feels like it can, but never gets dull. It’s also the only time in screen history that both Bruce Lee and Jackie Chan are on screen at the same time. Chan is one of the guards who attacks Lee; Lee grabs him, kills someone else, then kills Chan by breaking his neck.

Another is Roper’s fight against Bolo (Bolo Yeung), one of Han’s main goons. Roper devastates him repeatedly, both destroying him physically and humiliating him at the same time. Lee does the same to Oharra, a scene that culminates with some classic martial arts brutality. The great set piece, though, is the giant battle in the courtyard and the fight between Lee and Han. Like Lee’s second battle against Han’s guards, it goes on for a very long time, but remains consistently exciting, tense, and riveting.

Enter the Dragon was Lee’s last film; he died about three weeks before it was released. Much like James Dean, a huge part of Lee’s legend is that he had such a relatively short career. It’s entirely possible, likely even, that Lee’s star would have eventually faded, and like most martial artists, he’d have ended his career in low budget, direct-to-DVD releases. Hard to say. Here, he is immortalized as an ultimate, complete warrior unlike any to cross the screen before or since. If for no other reason—the martial arts tournament, the giant battle, the secret Kung Fu island—this film will live forever. 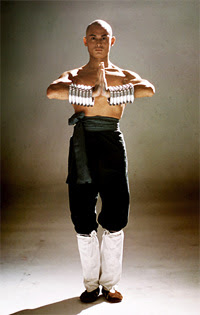 Of course martial artists have to come from somewhere. When we first meet Bruce Lee in Enter the Dragon, he’s already fully trained. One of the most basic, fundamental truths of the martial arts film is that the training comes from somewhere. Most martial arts films include a training sequence that takes from the novice trainee to bad ass kung fu master. No film takes that concept more seriously than The 36th Chamber of Shaolin. This movie goes by a few hundred names it seems like, and is also commonly known as Shaolin Master Killer and known in China as Shao Lin San Shi Liu Fang.

The film is broken into three main parts, with the middle being by far the longest. We start with life in a Chinese village in a part of the country that has been overtaken by the Tartars. They oppress the people mercilessly, and there are those who would like to fight back. One of them is San Ta (Gordon Liu), who is a student at a local college. He and his friends are pulled in by their teacher (Siu Tien Yeun), who enlists their support in rebellion.

Sadly, the Tartars know what’s going on. They kill off the leading rebel general, then start going through the town, killing off anyone they believe is part of the rebellion. The teacher and one of San Ta’s friends are killed. Then the Tartars start to work on families, killing off San Ta’s and his friends. They run, hoping to reach the Shaolin temple to learn Kung Fu so they can defend their people. The friend is killed, and only San Ta, wounded and in a coma at the end, makes it to the temple. He fights for his right to stay, and is allowed to train as a monk, ending the first part of the film.

In the second part, San Ta complains that he wants to learn Kung Fu, but all he does is clean things. He is told that he can train whenever he is ready. He wishes to start at the most difficult level, and he fails miserably. He then decides that he will start at the bottom and learn Kung Fu the way it should be learned. This means that he starts at the lowest ranking chamber, the 35th.

As San Ta progresses from chamber to chamber, he learns valuable and powerful lessons about how to move, how to stand, gains strength, learns to coordinate mind and body, and finally gets to learn boxing, kicks, and weapons. This sequence, starting from the 35th chamber and returning him back to the 1st takes the middle hour of the film. Yes, that’s the middle hour.

Here’s the thing: I love this stuff. While it’s arguable that San Ta progresses too rapidly and learns too quickly, and that some of the lessons seem to come too easily to him, I find these training sequences absolutely entertaining. At one point, I half feared, half hoped that we’d get to see all 35 chambers as he progressed, but even with just 5 minutes per chamber, that would take three hours. And yet, I would have watched it. I understand that for many people, this section of the film can be incredibly tedious, slow, and boring, but I am not one of those people. The only thing I was disappointed in here was that he never used the arm rings shown in the opening credits; those things are bitchin’ cool.

Once his training is done, San Ta is given the choice to control any of the 35 chambers he wants except for the top one. He instead asks to create a new lowest chamber—the 36th—to take Kung Fu to the masses to help the people outside the temple learn to defend themselves against oppression. He is denied (we are led to think) and kicked out of the temple, only allowed to return with a filled prayer book. Instead, he goes to fight the people who drove him to the temple in the first place, picking up new recruits along the way. Incidentally, he’s also credited in this film with inventing the three-section staff, which is a hard weapon to use.

I love the training stuff. I could stand more of it. If I have a complaint here, it’s that in the translation to English, the main character’s name in the version I found is San Ta. I kept wondering if, like the Wrist Chamber, the Eye Chamber, and the Leg Chamber, there would be a Toy Chamber.

No matter. For me, it all goes by too fast. I’d have preferred more of a montage here. It simply should have taken San Ta longer to reach the final chamber. It doesn’t hurt that my first teaching job was teaching self defense, so the more weapons stuff, the better in my opinion.

Why to watch Enter the Dragon: The quintessential Bruce Lee film, and massively influential on martial arts movies and action films.
Why not to watch: “Hewwo, Mistah Bwaithwaite!”

Why to watch Shao Lin San Shi Liu Fang: Training and ass kicking, ass kicking and training.
Why not to watch: There’s a temptation to say “Ho ho ho!” every time someone says “San Ta.”
Posted by SJHoneywell at 10:53 PM