Love in the Time of Nazis 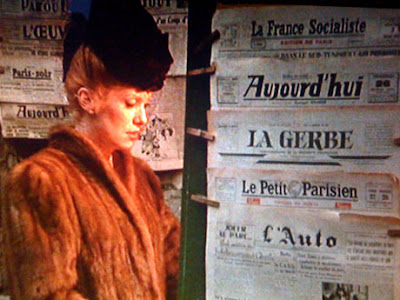 Some situations are naturally dramatic without much being added to them. For instance, there’s enough potential drama in World War II to last a filmmaker a lifetime. The right situation makes almost anything watchable, at least in theory. With the right people and the right direction, though, a good story can become something that lasts forever.

La Dernier Metro (The Last Metro) is such a story. Take occupied Paris in 1942, a city under the grinding bootheel of German occupation. Certainly this situation is filled with possibilities for a great film. Add to this a theater desperately trying to stay afloat, a situation made easier by the fact that people flock to the theaters at night to lose themselves in the troubles of others and to avoid the discomfort of their daily lives. The lives of these people in the theater could make for a fascinating film. To Be or Not To Be did the same thing, blending drama with comedy in Poland, and did so beautifully.

La Dernier Metro, though, is no comedy. The theater is run by Marion Steiner (Catherine Deneuve), the wife of the theater’s director and also its star actress. She has recently taken over the business of running the theater because her husband Lucas (Heinz Bennent) has fled the country. He’s done this because he sees the writing on the wall—he is both an immigrant to Paris and a Jew, and has let discretion be the better part of valor.

The theater hires a new leading man named Bernard Granger (Gerard Depardieu), who is a talented actor. What the others in the theater do not realize is that Bernard is also an active member of La Resistance, and plots with friends to plant bombs at German rallies and other places where they may get a few high value targets. The possibility of increased scrutiny causes several significant problems. First, and most importantly, we discover that Lucas really hasn’t fled the country. He has instead moved into the basement of the theater, where he directs the company’s new play in secret.

Adding to the troubles is that the “director” the company shows to the world is Jean-Loup Cottins (Jean Poiret), who is a known homosexual, who were hated by the Nazis only slightly less than they hated Jews. Sniffing around the theater is Daxiat (Jean-Louis Richard), a pro-German theater critic who espouses intense hatred for the Jews publically, although he frequently confides to Marion that her husband isn’t included in his vitriol.

Daxiat wields incredible power—he can help decide if the new play can be staged or should be censored completely. Additionally, he would like the theater for himself, and has discovered a way that he can force Marion and Jean-Loup to bring him in as an equal partner, which will almost certainly lead to him discovering Lucas’s hiding place in the cellar. Throw into this some love stories, particularly between Marion and Lucas, and Marion and Bernard, and there are plots here that could carry a film on their own.

La Dernier Metro could easily have gone in a variety of directions. With so much built on top of an already intense situation, the chance for this film to slip into melodrama would be the easiest thing in the world. So many interweaving plots and so much potential angst could either become comic or simply overwhelming and muddled. Fortunately, Francois Truffaut helmed this picture, and he is a master in the director’s chair.

In fact, as good as this film is, it’s not even close to his best work. One of the tragedies of the world is that often times, those who are the most brilliant in their work are also those who are so unfairly taken at a young age. Truffaut died in his early 50s, sadly taking away a good 20 years or so of an already brilliant career.

This is a beautiful film, strongly acted and carefully paced. While long (a shade over two hours), it does not slow down, get boring, or ever get confusing. It is thoroughly engrossing, with fully realized characters acting believably in every situation. The ending is perhaps a sly wink at the melodrama that could have ensued, but I for one was suckered into it and took Truffaut’s bait as if I were a large-mouthed bass.

In the end, La Dernier Metro is less about the war and the occupation, but about sacrifice and art. To what lengths will someone go to create that which they are meant to create? What indignities will they suffer, what physical, emotional, and mental pains will they endure to be given the opportunity to create? The answer to these questions is lovingly and carefully revealed throughout this magnificent film.

Why to watch La Dernier Metro: Ars gratia artis, for real.
Why not to watch: Your soul is made of stone.
Posted by SJHoneywell at 11:54 PM