Who Said Vampires are Romantic? 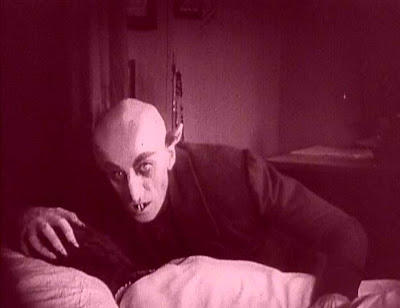 If you went to Wheaton North High School in the 1980s, you had three choices when it came to taking a foreign language. Most people took Spanish, another group took French, and a small, select few opted for German with Herr Kurtz. If you took German, you could be assured of a few things every given year. First, Herr Kurtz would spend some days not so much teaching as talking about other stuff like reminiscences of his childhood. Second, you could be sure that Herr Kurtz would screen two movies: Der Blaue Engel and Nosferatu: eine Symphonie des Grauens.

This was years ago for me, so my memories of this may well be hazy. As I recall, though, the further along we got in our knowledge of Deutsch, the less Herr Kurtz translated for us. I understood him showing us Der Blaue Engel, but I never really got why it seemed so important for us to watch Nosferatu. I suppose it allowed us a chance to follow written German rather than spoken, or perhaps Herr Kurtz just really liked Nosferatu. I kept hoping he’d show us Das Boot to no avail.

Today is probably the first time I’ve seen Nosferatu in 25 years, the last time I was in a high school German class. Despite this, there are parts of the film I remembered almost completely and almost perfectly. Murnau’s film still resonates despite its age and still has enough power to be compelling. The story is nothing new—if you’re remotely familiar with the Bram Stoker’s Dracula, you’ve seen this with different names.

Horror movies rely strongly on their ability to shock and stun, which means that many older horror movies lose their power over time. Once we can see the strings, the scare is gone. It can be argued that the average of the movie-going public has had expectations reduced due to lowered standards and limited attention spans. It can just as easily be argued that this same public has gotten smarter. We understand how movies are made and many of the tricks that are used. We know how the effects are done, which limits the ability of those effects to terrify. This is particularly true of very old films like Nosferatu. The stop motion of the carriage, for instance, looks silly now but must have startled audiences in the 1920s.

And yet, much of it still works and works beautifully. Early in the film as Harker/Hutter (Gustav von Wangenheim) arrives in Transylvania, a werewolf is heard outside the inn he stays in. We get a few close-ups of the beast…and it looks damn good. In truth it’s just film of a hyena, but how often have you seen a hyena at close range? They’re creepy looking, and the thing still works as an otherworldly, dark creature.

What really works here is Max Schreck as Count Orlok. He is a disturbing and evil presence, eyes rimmed with black, huge hooked nose, pointed ears, and sharp, needle-like teeth. He has several particular mannerisms that still come off as exceedingly bizarre and terrifying, even now because they have so seldom been duplicated or done as well. He walks stiffly, arms at his sides, giving him a corpse-like quality, or at least a quality of unnaturalness that even today is disturbing. Second, and far creepier and more effective is his habit of moving first his head and then his eyes, as if his eyes are compelled to turn where his head leads him. It is impossible to describe the effect of this other than to say it is horrifying because of how naturally Schreck does this and how unnatural it appears. Schreck appears as Count Orlok for about 10 minutes, yet he dominates the entire film.

It’s worth noting that but for some savvy film lovers, Nosferatu: eine Symphonie des Grauens would not exist today. Because the film is essentially the Dracula story with new names substituted, the widow of Bram Stoker sued, and as part of the settlement, all known prints and negatives of Murnau’s film were destroyed. Fortunately, versions of the film survived in other countries, allowing this film to live on, as well it should.

It’s valid to say that Nosferatu no longer has the ability to frighten a modern audience. In truth, for an audience used to more explicit violence, more graphic gore, and far better special effects, much of Nosferatu may appear silly or juvenile. And yet it is still fantastic, still beautiful, and still a film to be reckoned with. Scary or not, its influence is still felt. And imagine the terror of an audience in 1922, seeing a creation like Count Orlok for the first time. Viewed in the context of its time, it is one of the greatest films ever made. 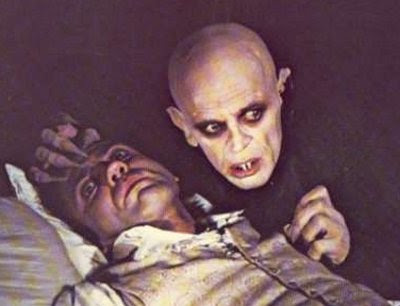 Normally, I’m a purist when it comes to remakes. I’m aware enough to realize that there are some remakes that are as good or better than the original, but I also wonder at the necessity for the vast number of them that seem to be happening now. Most remakes don’t match up to the original because they are changed dramatically or dumbed down for the assumed dumb audience. Time and time again, we discover that the dumbed down versions of films aren’t received as well as the originals, because once again, the movie companies have vastly underestimated the smarts of the typical movie audience.

Essentially, I think that directors should avoid remakes of films that are less than 50 years old. If you’re going to remake a film, at least choose one that has been out of the public consciousness for a good amount of time. Additionally, you should avoid redoing a true classic. Only the very best can get away with redoing something that has achieved that status.

Werner Herzog tried with his version of Nosferatu. He filmed it simultaneously in English and German, so there are some differences between the two, but they are essentially the same. A difference certainly exists from previou films in tone—the opening montage of mummified human remains is disturbing and off-putting, and indicates with no uncertainty that this will be a very different Nosferatu. Because the copyright had died off the original Dracula story, Herzog went with the more familiar names from Stoker’s book, including using the name Count Dracula (Klaus Kinski) for his vampire. Still, he stuck with the story of the original Murnau film rather than sticking with Stoker’s book. So, Harker (Bruno Ganz) is not engaged to Mina, but is married to Lucy (Isabelle Adjani). I’m not sure of the reason for this—it would be simple to just switch the names of the two women to stick with the book.

Regardless, the story is again one that you know in general. Kinski is made up to look as much like Max Schreck from the original film as possible, and it’s a good job. If anything, the appearance is far more disturbing in color than it was in black and white. Rather than being simply pale and pasty, here the vampire is the color of a frozen corpse, sort of pale blue-white. Most disturbing are the needle-like front teeth that prevent Kinski from closing his mouth. Kinski does manage to capture some of the style and movement of Schreck, which adds to the validity of this film.

There are some really notable performances here. Isabelle Adjani is fine, although her main function is to look pretty and have incredibly huge eyes that are constantly as wide as possible. Still, for eye candy, she fits the role. The insane Renfield (Roland Topor) punctuates every sentence with an annoying insane giggle that speaks very much to his character. Ganz’s portrayal of Harker is compelling, particularly as he falls further and further under the spell of Dracula, ending up as a pale shadow of himself, acting somewhere slightly more sane than Renfield, but certainly headed toward madness.

The real performance of note is Kinski’s. Perhaps it is the color, or perhaps it is merely the sound of his voice, but this version of Dracula is the most sympathetic I have seen. He is a tormented figure, one to be feared but also one to be pitied. He wants desperately to be loved, but is so hideous a countenance that no one could possibly love him. Where Schreck was merely fearsome, Lugosi was romantic, and Christopher Lee was powerful and even masculine/sexy, this Dracula is really tragic, filled with pain, longing, and palpable angst.

It’s not the original, but it’s not half bad. What’s most surprising and welcome here is the twist at the very end that changes this particular bloodsucker film into something rich and strange.

For the record, I watched the English version.

Why to watch Nosferatu, eine Symphonie des Grauens: Incredible influence that is felt today.
Why not to watch: You can’t put yourself in that 1920s mindset.

Why to watch Nosferatu the Vampyre: An interesting update on a classic film with an odd poignancy and a surprising twist.
Why not to watch: You can’t decide between the English or the German version.