Depending on who you ask, there are only a few real stories in the world. Some will tell you that there are only seven basic plots. Joseph Campbell made a big deal of the fact that there’s really only one story. Whichever of these ideas you subscribe to, there’s a good reason why the same characters, the same plots, and the same ideas show up in movie after movie. 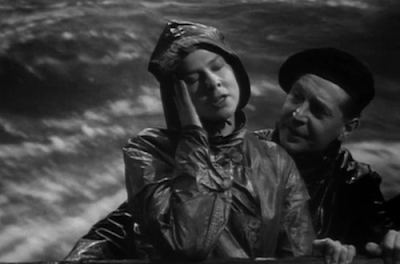 I Know Where I’m Going!, a Michael Powell/Emeric Pressburger collaboration, is an early example of a woman torn between what she wants and what she thinks she wants. This movie gets released about once a month, frequently starring Kate Hudson. Here’s the basic set up: a woman goes off in pursuit of marriage to a successful guy she probably doesn’t love, but who can set her up with a life of ease and privilege. One the way to her impending wedding, acts of God and man prevent her from meeting up with her husband-to-be, but she does encounter an attractive, romantic bachelor who she is both repelled by and attracted to. She spends the entire movie trying to decide between the two men—the one she obviously loves and the one who can give her the life she’s always dreamed of.

In short, I Know Where I’m Going! is a film you’ve almost certainly seen at least a dozen times, and there are no surprises here except for some of the set pieces like the massive whirlpool that threatens our heroine at the end of the film. In this case, the woman in question is the headstrong and difficult Joan Webster (Wendy Hiller), and the young, poor suitor is Torquil MacNeil (Roger Livesey). He is a poor Scottish laird, unable to enter his own castle due to a terrible curse. She is promised in marriage to a wealthy industrialist about the age of her father.

They meet because she is headed to an island on the Hebrides to be married to the old man, but the classic Scottish weather prevents her from getting there. Instead, she’s stuck on a different island with Torquil, a guy with a name that only Powell and Pressburger could even attempt to foist on an audience.

The plot is cute, but there are no surprises here unless you’ve never seen a romantic comedy in your life. From the moment Torquil walks on screen, the end is a foregone conclusion. And that would be fine if I gave much of a rat’s hindquarters about the characters, particularly Joan.

Quite frankly, I don’t like Joan. She’s bitchy, superior, and unpleasant. Most of the press material and many of the comments I’ve seen on this movie call her headstrong—as far as I’m concerned, that’s nothing but a euphemism for spoiled rotten. She’s sassy and brassy, and if she were a man, everyone would call her an asshole, but since she’s a woman, we’re supposed to be charmed by her. Wendy Hiller has virtually no chemistry with Roger Livesey, and frankly, I blame her, but that’s only because I really enjoy Roger Livesey. His voice is exactly what I think of when I think of upper crust British, and I could listen to him read a menu and be entertained by it. Frankly, in this film, Torquil is a much better match for Catriona (Pamela Brown), a local girl who is far more interesting than Joan could ever hope to be.

With better chemistry between the characters, or frankly with a character better than Joan Webster, I can be compelled to care about a story I’ve seen a dozen times. I enjoy both versions of Sabrina, for instance, even though I know exactly how it’s going to end every time. There’s a joy in seeing things come out the way we want them to. I’m as much a sucker for that as the next person. But not when I think there are better endings to be had out there. It doesn’t help that the theme song is horrifying, and made my dog twitch until it finally ended.

So what’s going for it? A few things. The Scottish countryside is beautiful, and beautifully filmed here. It’s also fun to see Petula Clark (as Cheril, the young girl with the giant glasses) as a young child, long before she sang “Downtown” or “Don’t Sleep in the Subway.” 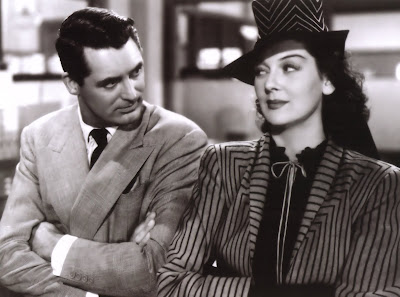 But not every retreaded plot means for a dull movie. His Girl Friday features version 2.0 of the love triangle in I Know Where I’m Going! We again have one woman and two men, but things are a little more complicated. The basics are the same. Hildy (Rosalind Russell) is a newspaper reporter who is recently back from an extended vacation. The reason for the vacation was a quickie Nevada divorce from her husband and editor, Walter Burns (Cary Grant). This divorce was entirely one-sided—Burns didn’t want it, doesn’t want to accept that Hildy has really divorced him, and wants her back, both in a marriage and on the paper.

However, Hildy has shown up to break some news to Walter. First, she doesn’t want back on the paper; she’s retiring. Second, the reason she’s retiring is that she’s getting married again, to a stable, but excessively dull insurance salesman named Bruce Baldwin (Ralph Bellamy). Now that you know the players, you should be able to figure out what happens. Walter does whatever he can to throw a wrench in the works between Hildy and Bruce, and also does everything he can to get her back on the paper. It doesn’t hurt that there’s a whale of a story going on at the moment.

A man stands accused of killing a police officer and is about to be executed. Walter Burns wants to save the man, and he needs Hildy to write the story. She finally agrees because Walter says he’ll take out a massive insurance policy on himself to give Bruce a fat commission. And, naturally, everything conspires to work out a happy ending for, well, at least Walter and Hildy.

The difference here, even though the story is pretty straightforward, is the characters themselves. Unlike Joan, Hildy really is a firebrand. She’s quick, she’s funny, and she’s just a little bit nasty. Walter is a conniving jerk, but he’s doing it because he can’t imagine his life without Hildy by his side. What’s great is how much of a match she is for him. She knows that Walter will pull particular stunts to prevent her and Bruce from boarding their train to Albany, so she takes all of their collective money and has him hide the commission check. Sure enough, Bruce is falsely arrested based on a tip to the police from Walter, and everything he owns is confiscated—but she’s outfoxed her ex, because the money and the check are safe.

We want these characters to be happy. They match each other and do so well. Even more, they can keep up with each other. As the story spins out of control and things continue to get crazy around them, they are the only ones who seem to know what is going on. They’re both frenetic, and both completely alive when something exciting is going on around them. They deserve eac other, and more than anything, we want them to end up were they should be.

The retread plot doesn’t matter here, because anyone who’s ever seen a romantic comedy before has a pretty good idea of where things are going to end up when the short running time finally winds down. We’re not watching this for the plot, but for the people going through the familiar story. If we like the people, we like the story, and Walter and Hildy are too clever and too fun to really dislike.

In short, good characters make even the most tired plot entertaining, and it never hurts to have Cary Grant.

Incidentally, if you’ve ever seen the Coen Brothers film The Hudsucker Proxy, Jennifer Jason Leigh’s role as Amy Archer, the hard-bitten, tough reporter looking for a scoop is very much a sop to Rosalind Russell in His Girl Friday. Leigh is a good actress, but in a side-by-side comparison, she’s no Rosalind Russell.

Why to watch I Know Where I’m Going!: There’s comfort in a familiar story.
Why not to watch: Why would anyone want the unpleasant Joan to end up with everything she desires?

Why to watch His Girl Friday: Snappy banter and fun, smart characters.
Why not to watch: Everyone talks at once.
Posted by SJHoneywell at 11:26 PM