A Draag on my 'Ommies 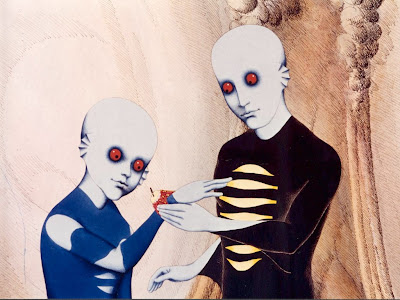 Anime leaves me cold in general. I realize there’s an entire subculture around anime, but I just don’t get it generally. Whereas I think a lot of films depend far too much on exposition and hammering points home, anime often has the opposite problem—there’s not nearly enough exposition. I can never follow the damn stories. So, for what it’s worth, I tend to prefer my animation in the hands of American storytellers. Pixar, to paraphrase P.G. Wodehouse, stands alone.

La Planete Sauvage (Fantastic Planet) is neither an American film nor anime, which puts it somewhere in the middle of my animation likes and dislikes. Certainly for a modern American audience accustomed either to Pixar’s style or that of most anime, the style here is rudimentary, basic, and perhaps even silly. It’s not as bad as, say, Clutch Cargo, but this is not animation that will wow anyone. It reminds me more than anything of Yellow Submarine both in terms of its look and feel and its overall weirdness.

We have a future world called Ygam (pronounced Yahm), populated by a race of blue-skinned, red-eyed, fan-eared humanoids called (depending on the translation) Draags or Trags. The Draags are scientifically advanced and stand roughly 50-100 feet high in comparison with the Oms, who are essentially culturally and mentally degraded humans. On Ygam, the Oms are both constant pest as well as companion animal for the Draags. Domesticated Oms are taught tricks and dressed in costumes while wild Oms are hunted down and exterminated. What makes manners worse is that various Om tribes battle each other in the park, preventing unified action.

Terr is such an Om, domesticated by a young Draag named Tiwa when his mother is destroyed thoughtlessly by another Draag. As Terr grows up, he discovers a way to gain the knowledge of the Draag, which he escapes with, taking this to the wild Oms. These Oms are superstitious and backward, and worship the planet’s sole satellite, the eponymous Fantastic Planet. Soon the Oms discover that once again the Draags are going to de-Om the park where the wild Oms live.

Much of the film is devoted to creating the bizarre world of Ygam. We frequently get short sequences of wandering beasties devouring each other or random Oms. One skull-faced monstrosity lands on an Om-populated tree and attacks like an anteater, sucking in the unwary on its sticky tongue. Plants wave ominously, striking the ground. A caged beast sticks out tentacles and captures birds, which it then shakes and throws to the ground. These sequences especially remind me of some of the animation in Yellow Submarine. They exist to emphasize the strangeness of the world as well as to indicate precisely how savage Ygam is.

La Planete Sauvage, for all of its colorful and possibly drug-inspired animation, demonstrates what I really love about science fiction. Any good story is about more than just the story it tells. Frequently, serious and important topics are tackled under the guise of science fiction because it is often easier to discuss problems like racism in the guise of human v. alien rather than white v. black. What is true for human/alien is shown then to be true for human/human and society/society. At least, I think, that’s often the intent.

It’s entirely possible to read racism into this film. The Oms, because of their degraded nature, are treated as little more than animals or pests. When Terr’s mother is killed in the beginning and he is crying, Tiwa asks her father why. His response is that perhaps he is frightened or hungry—no emotional possibilities like sorrow or grief are entertained. Because the Oms are small and annoying, they cannot think or feel according to the Draags. In fact, this was my initial read on this movie.

And then I looked into the history of it. It’s difficult to realize at first, since the director is French, that this is not a French production. Instead, this film was made by a Czechoslovakian film house by Czech animators. So while racism may still be here, this appears to be more a film about the Soviet occupation of Czechoslovakia and Eastern Europe than anything else. Those Czechs, it would seem from the Soviet perspective, make cute pets, but perhaps we’d be better off without them.

Fascinating, and strangely beautiful. L. Ron Hubbard stole the basic idea of this story (based on a Czech story by Stefan Wul) for Battlefield Earth. I can’t speak to the quality of that series of books, having never read them, but if you want this basic story, you’ll find a hell of a lot more to like here than the bloated film production that pile of stink turned out to be.

Why to watch La Planete Sauvage: A classic story in an oddly compelling setting.
Why not to watch: The animation is far less than you expect.
Posted by SJHoneywell at 3:08 PM