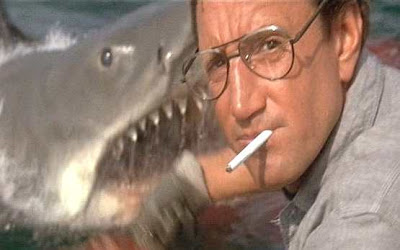 The other day, I talked about Yasujiro Ozu’s last film as the capstone to his career. But, just as every director makes a final film, so too does every director have an early career. Many of the greatest directors in history have an early period littered with low budgets, bad acting, cheap sets, and the best they can do with virtually no money. And then there’s Spielberg. With a few television episodes, a made-for-TV movie (Duel), and another film to his credit, he made Jaws. Freakin’ Jaws! And just to show people he was ready to smack the film industry around and call it his bitch for the rest of his damn life, he made one of the scariest movies anyone has ever seen and still got the thing through the censors with a PG rating. That’s right, folks; a movie that induces piss-your-bed nightmares and makes me glad I live in a landlocked state is cleared for viewing if mommy and daddy say so.

To make things more impressive, the pay off special effect of the film—the giant man-eating shark—didn’t work. The thing was consistently broken or malfunctioning, meaning he couldn’t use it as much as he wanted. So what did he do? He made it work anyway, because Steven Spielberg has balls the size of goddam Volkswagen Beetles.

You’ve probably seen this movie, but I realize that there are people in the world who haven’t. So here’s the story. A former New York cop named Martin Brody (Roy Scheider) has agreed to become the new police chief of Amity Island, a resort town on the New England coast. Brody doesn’t like the water, doesn’t like living on an island, but running herd on a bunch of drunk tourists and townies has to be easier than chasing down drug dealers, right?

Sadly, this year a massive great white shark has decided that the waters off Amity is a restaurant and has just opened for business. A late night swimmer is killed by the creature, although no one sees it happen. While Brody wants to close the beaches, the town’s mayor, Larry Vaughn (Murray Hamilton) doesn’t want to do anything that might endanger the town’s survival or the flow of needed summer dollars. Then, a young boy is killed just off the beach in the middle of the day, right in front of most of the town.

It’s here that we are introduced to the other two important characters in this film. Sam Quint (Robert Shaw) is a local fisherman, who tells the town council that he’ll catch the shark for a fee of $10,000. Additionally, the local oceanographic institute sends a researcher named Matt Hooper (Richard Dreyfuss) to investigate the attacks, and his preliminary investigation of the remains of the first victim indicates that, to quote him, it wasn’t a boat propeller, a coral reef, or Jack the Ripper, but a shark.

You know how it’s going to end up, though, right? Quint, Brody, and Hooper end up on Quint’s boat out on the water hunting the giant critter and trying desperately not to get eaten in the process. That’s what movies are made of, folks: adventure on the high seas and not getting eaten.

Everything about this movie works from the opening underwater sequence and the first attack on the first victim through to the last moments as the credits start to roll. Brody has a genuine relationship with his wife, Ellen (Lorraine Gary), who is as supportive of her husband as she can be while worrying desperately that the fool errand he goes on is misguided bravery. She may feel like a throwaway character, since she doesn’t get a massive amount of screen time, but for me, she’s one of the things that grounds the film in reality. It would be easy to make her a cardboard cutout, but she isn’t.

These are real people. After a shark is caught off the beach and Brody is confronted by the mother of little boy who was killed, Hooper goes to visit the Brodys. Martin is slowly getting himself drunk and opens a bottle of red wine and slowly pours himself a huge tumbler, then pours regular wine glasses for Hooper and his wife. It’s a real reaction, and it makes Brody real in that moment.

There are too many great moments in this film to mention them all. Hooper’s investigation of Ben Gardner’s boat, the two fishermen throwing a roast off the dock, Quint’s speech about the USS Indianapolis, it all works. Additionally, as with any truly scary movie, it’s not just a bunch of scares laced together. There are moments of comedy throughout, and even a few moments of sweetness. The cutest is when Brody is slowly drinking himself into oblivion and his young son is imitating his movements.

Spielberg is smart with his camera, too. A number of the shots before and during the shark attacks have the camera at the water level, sometimes moving the microphone under and over the water to catch snippets of sound. One of the greatest shots of all time occurs as the Kitner boy is attacked—Spielberg simultaneously pulls back and zooms on the horrified face of Chief Brody in what feels like a moment of vertigo.

This is a rare instance for a film as well; it’s better than the book. I read Benchley’s novel a number of years ago. While the book is certainly exciting, it also contains (in my opinion), quite a bit of unnecessary crap like Ellen Brody having an affair with Hooper. It seemed like pure, worthless titillation to me. The movie cuts through a lot of this crap and goes right for the meat of the story, concentrating on the shark and on the three men who hunt it down. Incidentally, Benchley makes an appearance in the film—he’s the reporter on the beach on the 4th of July.

It also doesn't hurt that it has one of the greatest soundtracks ever conceived by mortal man.

As Hooper says, the shark in this film is a miracle of evolution. All it does is swim, eat, and make little sharks. All Spielberg does here is film and make people scared of the water.

Why to watch Jaws: Even 35 years after it was made, it hasn’t aged a day.
Why not to watch: You’ll have to learn to take your vacations in the mountains.
Posted by SJHoneywell at 8:22 PM