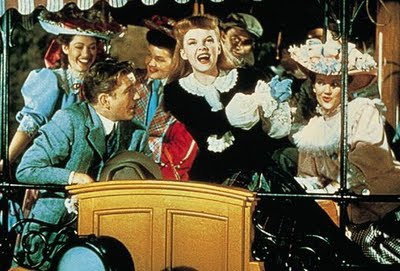 By Christ, I hate musicals. I really do. Certainly there are some that are worth watching and enjoying, but for the most part, there are plenty of things I would rather do than watch a musical. I can generally tell how they are going to come out from the first few moments and I generally want to punch the characters in the melon. No one should ever be that damn perky most of their life. All of the characters in musicals (yes, I’m generalizing) are either those never-say-die, always bucked up people who greet any adversity with pluck and determination, or freakin’ manic depressives spinning from wild, uncontrollable happiness to the pits of depression on a whim. All of ‘em need a good slap across the puss.

What really drives me batty in musicals is, well, the musical part. A musical suggests itself as a slice of real life, with real characters acting in real ways. And yet they break out into song and perfect choreography and there’s an orchestra behind them whenever they need it. For me, it breaks the reality. And so, the musicals I tend to enjoy are those in which the music either makes sense with the story, or that are inherently fantastic. All That Jazz worked for me because of the nature of the music working with the story. Same for The Wizard of Oz.

Let’s take Meet Me in St. Louis as an example of the sort of musical I dislike. We are forced to spend our time with the Smith family in St. Louis around the time of the World’s Fair. Mainly we’re stuck with Esther (Judy Garland), who is boy crazy and desperate for the attentions of the new boy next door, John Truett (Tom Drake). Her sister Rose (Lucille Bremer) has a beau who won’t propose. They’re also plagued by little sisters Agnes (Joan Carroll) and the incredibly annoying five-year-old Tootie (Margaret O’Brien). The problem comes when their father (Leon Ames) is presented with a job in New York, forcing the family to move to New York.

And here’s one of the places where I split the dog with people who are fans of this film. Right before the big announcement, Tootie and Agnes pull a Halloween prank that involves throwing a dummy body on the trolley tracks in an effort to derail it. When confronted with this crime—the sort of thing that would get anyone else sent to reformatory school—everyone laughs and gets ice cream. Then when everyone hears the news that Dad’s gotten a promotion, he’s treated like he stewed the family dog for Sunday dinner.

Later, Esther’s chance to go to a big Christmas dance with Mr. Truett is ruined by the fact that he can’t get his tuxedo from the cleaners. This is what passes for a damn problem in this movie—a guy can’t get his pants. And this is treated with the seriousness with which the Halloween prank should have been.

Seriously, I’m overloaded with the sassiness of everyone involved. Katie the maid (Marjorie Main) is filled with the sort of advice that shows up only in movies like this one. Dammit, these people have a freakin’ maid! Tootie is particularly disturbed and disturbing—she claims that all of her dolls have fatal diseases and buries them in the local cemetery. This is heartwarming? I’m supposed to like this kid and be amused by her? She’s scarier than Wednesday Addams on a meth binge. Before the big move to New York, she goes out in the yard and goes Leatherface on the collection of snowmen. This is sweet and endearing?

I’ll give you the production numbers, I’ll give you the music, I’ll even give you Judy Garland’s fabulous voice. But by all that is holy, these are relentlessly terrible people. I don’t like a damn one of them, and I’d like them to go away. They get bent out of shape about their dance cards at the ball, act like spoiled children, and generally give me a pain. Great music and production numbers aside, this movie couldn’t finish fast enough to suit me. This says nothing to the fact that in general, any man who isn’t at least 60 years old is portrayed as the world’s biggest chump. Screw you, movie! 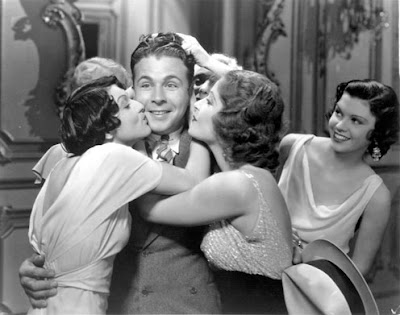 The other sort of musical is the vein of 42nd Street, which is to say that it’s a musical about musicals. There’s a surprising number of these, and many of them are pretty famous. The musical numbers make a lot more sense in these because the characters are actors and producers and directors of musicals on Broadway. There are plenty of these, not the least of which is the previously mentioned All That Jazz. ATJ works for me, though, because it’s a bio pic. It’s not about the whacky escapades of theater people.

It’s the self-referential nature that bothers me with these. It feels to me as if the world would be very little different if these things didn’t exist—the only reason they’re around is to essentially aggrandize themselves. “Look at us!” these movies seem to say, “We’re special because we’re on stage and you should love us. LOVE US!” They almost plead with wanting the audience to find them irresistible. Frankly, I don’t find ‘em that way. I don’t care about a show that’s about the production of a show.

What 42nd Street has going for it is the cast of thousands, and it’s difficult to argue with a cast of thousands—you can’t make yourself heard because they talk over you. In this film, we get to spend a lot of time with (among others) Warner Baxter, Bebe Daniels, George Brent, Una Merkel, Ruby Keeler, Guy Kibbee, Dick Powell, and Ginger Rogers.

I can’t find myself caring about these people. I understand where the impetus for films and stories like this come from. In the first place, 42nd Street came right out of the Great Depression, and there was a certain need for feel-good films that made the populace walk out of the theater with a spring in the step and a song in the heart. The other place these come from is the fact that plenty of people who write them work in musical theater, so they’re writing what they know about. It make sense, but it doesn’t mean I have to like it.

Years ago, when I was in high school, a few of my friends were into ham radio. They had rigs they’d pull out and call across the world to have conversations with people. On the surface, that’s actually pretty cool, if essentially dork-tastic. What got me about it was the fact that when they did get ahold of someone in, say, Germany or Iceland, they’d end up talking to each other about their radios. They’d bankroll these powerful radios and then spend their time talking about their radios. If they didn’t have the radios, they’d have nothing to talk about on their radios.

Films like this remind me of that—it’s a film about itself, like a story about writing a story, or a poem about poetry. Certainly people who are involved in musical theater will find a lot here to love, but for the rest of us who don’t get to wipe off the greasepaint…what’s the point?

Add to this the repressive stupidity of some of these people. One character is accosted by thugs looking specifically for him. He pretends to be someone else while his lady fair looks on. The thug busts him across the chops, and here comes the woman, shouting his name out in front of the guys looking for him. I’m sometimes surprised these people are capable of remembering to breathe without a constant reminder.

I can’t complain terribly about this movie other than its subject matter. It’s a well produced film with some good performances, despite the fact that I can’t find myself giving a rat’s posterior about these people. But if you’re treading the boards, you’ll like it a hell of a lot more than I did.

Why to watch Meet Me in St. Louis: Great musical numbers.
Why not to watch: Everything else about it.

Why to watch 42nd Street: A worthwhile cast.
Why not to watch: It’s difficult to care.
Posted by SJHoneywell at 2:16 PM