Survival in the Modern World 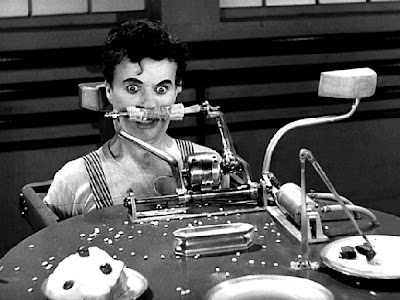 Certain films, like certain books or pieces of music, need to be seen from the perspective of their own time to truly be appreciated. Others are timeless, and can be appreciated no matter what era they are from and no matter what era they are viewed in. Such a film is Modern Times, which I’ve now watched twice in one day, the first time by myself and the second time with my seven-year-old daughter. It’s interesting to see how well a film like this translates to a kid who’s never really watched an effectively silent movie before.

Charlie Chaplin is a good place to start as an introduction to silent films in general, and silent comedies in the specific. Chaplin’s tramp character is an everyman loser, which makes him not only readily identifiable, but entirely sympathetic for adults and kids alike. Harold Lloyd is a lot wilder and for my money, Buster Keaton is a more subtle. Chaplin is broadly goofy and comic, and like any good comedian, Chaplin coats his hero with tragedy. Modern Times, the last film that features Chaplin’s Little Tramp, is loaded with not only with broad comedy but also a mountain of pathos and tragedy for the Tramp to overcome.

If you’ve seen a still from this film, it’s almost certainly from the first part of the film, with the Tramp working in the factory, tightening bolts on an endless conveyor line of machine parts, winding through the machinery, or being fed by the automatic feeder. These are all great scenes, but are only the very first part of the film. I showed my daughter the feeding machine sequence, and she laughed so hard that she wanted to watch the whole movie, which is why I watched it twice. No question that these are wonderful comedic scenes, but they are also a very small portion of the film.

The bulk of the film concerns the Tramp’s life after he is forced out of the factory due to a nervous breakdown. He is mistaken for a communist leader and thrown in jail where he inadvertently foils an escape attempt. This gives him a life of ease in jail, until he is pardoned because of his actions and thrown back on the street. All he wants now is to get back to prison. His chance comes when he sees a young woman (Paulette Goddard) steal a loaf of bread. He takes the rap for her, but is let go. Eventually, the two of them are thrown in the same paddy wagon. She makes a break for it, he falls out of the truck with her, and now the two of them are stuck together.

The rest of the film is essentially him trying to make a life for the two of them as they run from the law and he attempts a number of careers to give them a place to live. The ending is far less than might be expected for a typical comedy, and yet it is uplifting and sweet in its own way. Chaplin’s Tramp is too much of a loser to have anything really wonderful happen to him, which is nicely shown in contrasted scenes. In the first, he imagines his dream home with the young girl. Later, almost the exact scene plays out with mildly disastrous results.

There’s a reason that the Little Tramp is an enduring character in American film mythology. He’s the lovable loser that everyone roots for. Bad things happen to him because of bad luck, and good things happen because of good luck. The Tramp is never in charge of his own fate, and that’s certainly the message here. In this film, created during the height of the Great Depression, the Tramp is at the mercy of the things that happen to him. We’d like for him to have things go well, but we’re resigned to the fact that things probably won’t go well. It’s simply never in the cards for the poor guy.

Chaplin is brilliant both as a comic actor and as a director. Each scene is played both for its comedic value and its tragic reality. We as the audience laugh at the Tramp’s misfortune both because it’s funny and because it’s sad. It’s also worth noting that Paulette Goddard might well be the most beautiful woman ever filmed. She’s certainly pretty when she’s cleaned up toward the end of the film, but for my money, she’s absolutely captivating as the dirty faced waif through the first three-quarters. The first time she appears on screen here, stealing bananas from a ship to throw to kids on the dock side, she is utterly, heart-skip-a-beat beautiful.

Modern Times is the last film to use title cards instead of speech except for parodies. All of the speech in the film comes through machinery—a phonograph, a radio, and the like. While there is music and sound effects, this is film essentially as a silent movie, the last one ever made. Everything Chaplin did after this was a talkie. Even Chaplin sings in this, although what he sings is less comprehensible and more a Romance language patois of goofiness (although you can follow the plot of the song by watching his hand motions).

The last ever title card used for its original effect, essentially the last ever “speech” in the silent film era, says, “Buck up – never say die. We’ll get along!” That we will, just as we assume the Tramp and the girl will. 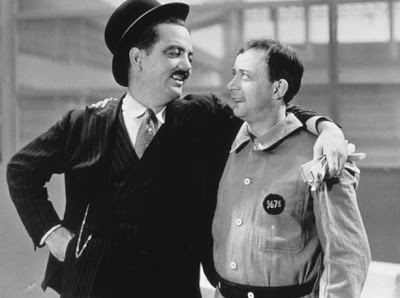 Of course, it’s also important to acknowledge source material. Chaplin was sued for Modern Times by the distribution company of A Nous la Liberte (Freedom for Us), a French film from 1931 that Modern Times bears a striking resemblance to. It’s worth noting that author/director Rene Claire refused to be a part of the suit, considering Chaplin’s work an homage to his own. Eventually, the suit was simply settled by Chaplin after more than a decade.

Similarities are evident right away. As the group of prisoners at the start of the film stand up to a blaring noise and march in unison, it is evident where Chaplin got his inspiration for the food line scene in his own movie. Much of the beginning concerns a prison break of two inmates, Louis (Raymond Cordy) and Emile (Henri Marchand). Emile fails to break out, but Louis gets away, and knocks down a bicycle racer, hopping on the bike to get away. We also learn quickly that Louis is pretty quick on his feet. He manages to rip off a pawn shop by pretending to be robbed himself and sending the store owner out after non-existent thieves.

Eventually, Emile escapes and finds a job for himself in a factory that makes phonographs, and discovers his old cellmate Louis is a bigwig there. At the factory, the workers are treated little better and little different from the machines. There are shades of Fritz Lang’s Metropolis here, with the dehumanizing effects of the factory work on the men, although A Nous la Liberte is played for comedy. Also, since Louis is constantly worried that someone will recognize him from his prison break, there is some presaging another social drama, I am a Fugitive from a Chain Gang here. But it’s social repression, degradation, and soul crushing work with a cheeky grin and a wink.

Created in the early era of the talkies, A Nous la Liberte does more with sound than merely revel in the fact that it exists. Most directors seemed to be so enamored of the idea that sound actually existed in films that they didn’t really know what to do with it. Rene Claire realized at this early stage that sound was not something magical, but another tool in the repertoire of a smart director. Dialogue in places turns into little poems or songs, little rhythms that further establish the clockwork, dehumanized world that Emile lives in. To keep him quiet, Louis takes him in and moves him quickly up the factory ladder—anything to avoid being caught.

Like the Little Tramp who followed him into this modern, almost clockwork-punk world, much of what we are shown are comedic set pieces that involve this new world where only the end result product has value, and people have value only in so much as they can produce things for the good of the factory. Emile is a romantic and wants something more out of life than a mind-numbing job and just enough pay to get him by. But that’s not the reality that the capitalists—like Louis, who he helped free—have created.

Louis wants him away from the plant, but Emile wants to stay. His reason, despite the terrible work and treatment is that he’s fallen in love with one of the workers, known to us only by her employee number, 45. Fortunately for Emile, the girl’s uncle works at the plant as well. Sadly, he disapproves of the match until Louis offers a dowry for the girl—anything to keep Emile happy and quiet. But of course, she loves someone else.

What makes A Nous la Liberte work is the empathy developed for Emile. He may well be a criminal, but he’s such a gentle soul that we want things to work out for him. Even if he doesn’t get everything he wants, he’s the type of character we’d like to see succeed.

Why to watch A Nous la Liberte: References everywhere
Why not to watch: Comedy is sometimes more difficult in another language.
Posted by SJHoneywell at 10:53 PM