Love and Death, Death and Love 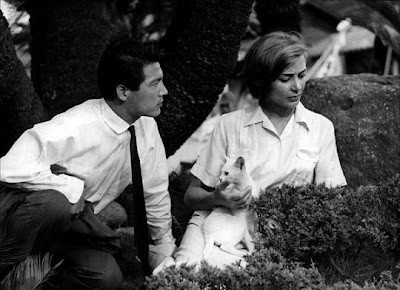 You sit down with a film with a given name, you have certain expectations. A title generally tells you a lot about a film and what you can expect from it. A film called Seven Brides for Seven Brothers is probably going to end with everyone smiling at the end. One called I Spit on Your Grave probably isn’t going to have a lot of musical numbers.

So what does the name Hiroshima Mon Amour conjure up? Love and death? That wouldn’t be a bad image, actually. Hiroshima is forever linked with great human tragedy and suffering, and “mon amour” is an almost universally known phrase of love. But does that film name conjure up an image of something that has proved to be one of the most influential films of the last fifty years? Probably not. If it did, it’s because you’ve seen this film before or you’re lying just to make yourself look cool on my blog.

And yet, this is what this film did, and in Alain Resnais’s first feature film. Films before this had played with the nature of time as depicted on screen before. Citizen Kane is told in flashback, for instance, as is a great deal of one of my favorites so far from this year, The Life and Death of Colonel Blimp. But until this film, a linear narrative structure was something we all tended to expect from a film. Resnais did away with this by creating a movie that has no real linear structure. This is not to say that it is difficult to follow. It isn’t. It’s just not always clear what takes place when. Yet this is not important. It doesn’t matter, because the story is one about memory and willful forgetting, which requires a non-linear depiction. Flashbacks cut in quickly to represent flashes of memory.

We have only two real characters of note here. Elle (Emmanuelle Riva) is a French actress making a film about peace in post-war Hiroshima. Lui (Eiji Okada) is an architect conscripted during the war, and now back in Hiroshima. They meet and have a brief, torrid affair, all with the knowledge of their own spouses, their memories of the war, and the inevitability of her finishing her film and going back to France.

Both have much they would like to forget. For him, he had a family in Hiroshima, all killed in the blast while he was away with the army. She lived in Nevers and had an intense affair with an occupying German soldier. Because of this, she suffered the fate of many French women who were involved with the Germans—her head was shaved and she was ridiculed and humiliated. She fled to Paris when her hair grew back and her anonymity returned to her.

Hiroshima Mon Amour is about these past actions, these past lives that live with us still even though we wish to forget them. Both the desire to be released from these memories because of the pain they cause and the necessity of remembering these painful things because of their importance are explored here. In the beginning of the film, Lui tells Elle that she has seen nothing in Hiroshima. She saw nothing, remembers nothing, knows nothing of Hiroshima, while she protests that it is impossible for her to forget, but forget she does anyway, as she must.

There is a particular beauty to this film, but the beauty comes not from the creation of the film but from the losses that are realized in it. It’s a beautiful tragedy, beautiful because of its intense sadness. Lui becomes the German lover for Elle, and she relives both her love for him and his loss with him. Even this we see not in a straight line, but in snippets of memory in a vague order.

What I was not prepared for in watching this film was the first ten or twenty minutes. While we are introduced to our characters, we are also shown many of the horrors of Hiroshima after the bomb. I know these things are reality, but I did not want to see them. Oddly, despite this, it does not detract from the film, but there were a few spots during which I covered the screen.

A lovely film. A sad and tragic and beautiful film. And I don’t think I want to see it again.

As a final note, Resnais wanted this film to be universal. It’s why the names of our characters are, translated from the French, “her” and “him.”

Why to watch Hiroshima Mon Amour: Beautiful, beautiful tragedy.
Why not to watch: Footage of atom bomb victims.
Posted by SJHoneywell at 10:20 PM