Ah, the western is very much its own thing, isn’t it? It has its own language, its own rhythm, its own feeling. And yet, there are many different types of western, and the western as a genre has gone through a number of different periods. 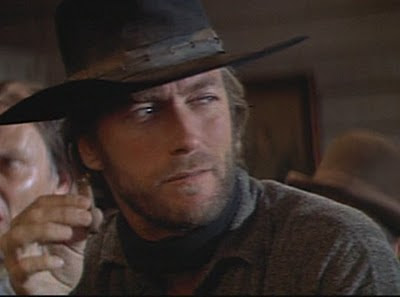 Westerns from the 60s and 70s, for instance, tended toward the violent and nihilistic. While there are certainly a number of excellent examples of this, High Plains Drifter stands out near the top. It seems very much like there isn’t a single person to root for in this movie—everyone is tainted in some way. Still, there is a perverse pleasure in watching the hero toy with the people who live in Lago. The joy comes from not his ability to twist and distort them into new shapes, but to force them to see themselves for what they are.

Essentially, as with many a great western, we start when a stranger (Clint Eastwood) rides into town. His presence causes an immediate stir when he’s harassed at the local saloon. He leaves and heads to the barber, where he orders a shave and a hot bath. Three men come into push him further, and the stranger shoots down all three. On his way out, a woman (Marianna Hill) intentionally runs into him, and he drags her off to a barn and rapes her.

As it turns out, the three men from the day before were hired guns there to protect the town and the town’s mining interests. We see in a series of flashbacks that the town’s previous lawman, Marshall Jim Duncan (Buddy Van Horn) was whipped to death in the middle of town with virtually all of the townspeople watching, and doing nothing to help. The three men responsible, Stacey Bridges (the underrated Geoffrey Lewis), and the Carlin brothers, Cole (Anthony James) and Dan (Dan Vadis) are being released from prison. The people of Lago have a reason to fear the men coming back.

So, the strangers stays on in town, and asks as his price anything he wants. He kicks everyone else out of the hotel, buys himself new boots, gives away the general store’s merchandise, and has rounds of drinks bought at the saloon on the town’s dime. He also makes the local laughing stock, a midget named Mordecai (Billy Curtis) the new sheriff and mayor of Lago. The stranger also requisitions 200 gallons of red paint and has the townspeople paint the entire town red, a town that he renames “Hell.”

In the meantime, we learn that the townspeople are starting to come apart at the seams. The stranger is driving them all crazy and turning them against each other. More importantly, we learn why Marshall Duncan was killed. It seems that the Marshall discovered that the town’s mine and only real employer and source of income is located on government property. IF he’d reported this, the mine would have been closed, and the town would have died. To prevent this, the leading townspeople allow the outlaws to horsewhip the Marshall to death with the promise of a large reward when they were done. They reneged on the reward and sent the men to prison instead. And just when the three bad men are riding into town, the stranger leaves, forcing the townspeople to deal with the problem they’ve created on their own.

However much it feels like nihilism, though, there is a message here. It’s never really clear if the stranger is the revenant of Marshall Duncan or not, although that seems to be the most likely thing. What is true, though, is that the townspeople are forced to face their sins and pay for them, often pay for them at the cost of their own life. It’s no accident that the town’s name, Lago, is almost exactly the same as Iago, the name of one of Shakespeare’s greatest and most treacherous villains, and one whose particular crime is betrayal of an innocent man. In essence, the film seems to be about karma more than anything—a karmic game of Russian roulette with a six gun.

Beyond that, it’s a Clint Eastwood western, and the first one he directed. He’s not really gotten into his later great form as a director, but he’s already mature as a director in this film. He already knows what he wants to show and how to use his camera. The fact is that this film is still incredibly watchable, interesting, and exciting, and Eastwood only improved in the director’s chair after it. There’s a few great lines, some tremendous action, and lots of guys killed in a variety of ways. Really, it’s everything anyone would want in a horse and saddle picture with a nicely realized message thrown in for good measure. 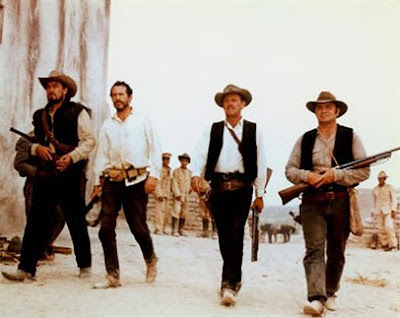 It’s impossible to discuss the idea of violence in a western without discussing the work of Sam Peckinpah, though, and of all his westerns, The Wild Bunch may well be the best. The film concerns a group of outlaws and thieves, a gang of former outlaws and layabouts turned bounty hunters, the Mexican Revolution, and a large shipment of guns for the U.S. Army. What’s interesting here is that the film takes place in 1913, much later than a typical western.

We start by being introduced to the eponymous Wild Bunch, headed by Pike Bishop (William Holden), lieutenanted by Dutch Engstrom (Ernest Borgnine) and crewed by the Gorch brothers Lyle (Warren Oates) and Tector (Ben Johnson), as well as a number of others, most notably Angel (Jaime Sanchez) and Freddie Sykes (Edmond O’Brien). Disguised as cavalry soldiers, the crew breaks into San Rafael, Texas, and robs the bank. However, also in town is a group of bounty hunters lead by Patrick Harrigan (Albert Dekker) and Deke Thornton (Robert Ryan), who is a former member of the gang.

This crew has been sent to capture Pike and his crew, but except for the leaders, the gang is completely incompetent, and most of the crew gets away. Sadly, they discover that they’ve been set up. Rather than getting away with sacks of loot, they’ve made off with sacks of worthless washers. While they decide what to do next, we discover exactly why Deke Thornton is so ready to catch his old friends. He’s currently out on parole, and has 30 days to bring them back or will be sent back up the river.

Pike’s team winds up in Angel’s village in Mexico, where they discover that the people are under attack from a local Mexican general named Mapache (Emilio Fernandez). They go to visit Mapache, who hires them to steal a shipment of U.S. Army weapons and ammunition for $10,000. While Angel doesn’t want to help the people destroying his home, he agrees, because Pike secretly agrees to give him and his people a crate of weapons as well.

And so we have a set up for a lot of high powered action and violence. Nobody trusts anybody else and everyone is out to kill everyone else. Angel wants Mapache dead and his army destroyed, Deke has been charged to bring back the bodies of his former friends, Mapache wants to take out the village, and Pike and his team just want to get paid and head off.

So what’s the point? It’s entirely possible that there is an intended meaning in Peckinpah’s film. He could well be trying to present a message of the inevitability of violence, something that we saw a few days ago in Straw Dogs. Perhaps, like High Plains Drifter, this is a story about karma, and that those who live by the gun will also die by it eventually. Or perhaps it is about karma in a different sense—that there are prices to pay for everything, even trying to do the right thing or even a score.

Or it could just be a great, exciting story with a lot of opportunities for Peckinpah to show guys getting shot in slow motion with the blood spurting from their chests. While I’m almost certain that there’s something more here, the truth of the matter is that there doesn’t really need to be more than just an excuse for a great story. There is a particular joy to watching the characters in this movie grin at the start of battle and while the lead flies. The message is there, but do you really need it?

Why to watch High Plains Drifter: It’s a Clint Eastwood western. What more do you need?
Why not to watch: Your hero is a killer and a rapist.

Why to watch The Wild Bunch: A ripping western yarn, as late in the western period as you can get before it stops being wild.
Why not to watch: S-l-o-w m-o-t-i-o-n d-e-a-d g-u-y-s.
Posted by SJHoneywell at 11:47 PM