There is a perversity about British boarding schools, which have achieved a measure of celebrity and charm thanks to the popularity of Harry Potter. Giant tables and mass meals, group common rooms and fun, fun, fun. We get a similar view of the American versions of such schools in films like The Emperor’s Club and most especially Dead Poets Society, where such schools are looked at as perhaps having some problems, but where the students are smart, attentive, and well mannered in general. My guess is that the reality is substantially different, and that much like the Royal Navy, they endure based on rum, buggery, and the lash. You can tell which house at Hogwarts has the most buggery, too. It’s undoubtedly Slytherin. 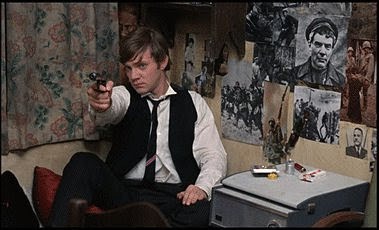 Lindsay Anderson’s If…. (four dots, not three) takes place at such a boarding school, and suggests all of the terrors and horrors that such a place might—and likely does—have. Those in charge haze and bully those below them, who in turn bully and haze the ones below them. In addition to being dedicated to education, the school is also a lesson in hierarchy and power. The younger students “scum” for the older ones, which means that they act as unofficial, unpaid servants who must do what they are told. We learn quickly, in fact, that one scum’s job is to warm up the toilet seat for one of the older students. The students in charge, typically called “prefects” at most schools, are called “whips” at this one—and with a purpose.

Our main character here is Mick Travis (Malcolm McDowell), an older student at the school, but not a whip or one with much power or importance. He is a definite rebel, as we see on his initial appearance wrapped in a long black scarf covering his face, with a hat pulled down over his head. He keeps the scarf on in defiance of the people in charge of him until he can sneak off on his own, when it becomes evident that he has grown a mustache over the summer. A rebel, yes, but not so much of one that he doesn’t shave it off right away before being told to.

We quickly learn the daily life of the students, which for the younger students is not what their parents sent them to school for. A collection of whips, for instance, frankly and openly discusses their collective homosexual conquests of the younger boys. One of the whips, almost certainly interested in the pretty, almost female looking Bobby Phillips (Rupert Webster) chides them of their adolescent sex, but is given Phillips as his new scum.

Mick, in the meantime, hooks up with his pair of friends Johnny (David Wood) and Wallace (Richard Warwick). The three flout authority when they can, and are punished for it. These floutings of authority become more and more serious and culminate in a pitched battle outside of the school at the end of the film.

What’s really fascinating here though, is that a considerable amount of the film is purely fantasy, and not actually happening. When and where these fantasy scenes take place can be difficult to see. For instance, at one point, Mick and Johnny head into the nearby town, steal a motorcycle from a showroom, and head off for a cup of coffee. Mick kisses the girl behind the counter, and she slaps him hard. And then, moments later, the two are having rough, animal sex on the floor of the shop…and suddenly it’s done, she’s dressed again, and Johnny is just sitting there having his coffee.

This dips into surrealism and fantasy occur more and more as the film progresses, but not everything is fantasy. For instance, the scene where Mick and his friends are hauled off by their whips and punished—a vicious caning after which they are forced to thank the caner and shake his hand actually happens. So too does the scene where Wallace and Bobby are laying in bed together, sleeping peacefully. But I find it difficult to accept any of the scenes that contain the presence of the girl from the coffee shop (Christine Noonan) after her initial slap at face value.

The famous scene of If…. is the closing, in which our three heroes, the girl, and Bobby take up arms against the school, the other students, and the parents. They place themselves on the roof of a building and set fire to the building where a presentation is being made to the rest of the school. As people flee the fire, the group opens fire with machine guns. And yet, the girl is here as well, and earlier, she appeared from nowhere, a female at an all-boys school. I can’t take it at face value, and assume that virtually everything that happens after the military maneuvers toward the end of the film happens in Mick’s fantasy world. I’m not saying he’s crazy, but I am saying that I don’t buy the reality of this part of the film.

At the very least, their punishment for actually firing live rounds into a crowd would be much stiffer, and there’s no way there would be limited consequences for Mick shooting blanks at the vicar and then threatening him with a bayonet. And what was the vicar doing in the drawer in the headmaster’s office?

No. It’s fantasy. It’s nothing more than what Mick would like to do, but finds himself impotent to do in reality. This is the only way the last 20 minutes or so of the film make any kind of sense for me. Despite this unreality, the final scenes are incredibly powerful, and prophetic. This is a dangerous film, the kind anyone would fear falling into the hands of young students just smart enough to understand it and just dumb enough to think it reality. I live in a town that survived a school shooting a few years ago; this is still pretty raw for many of us here. 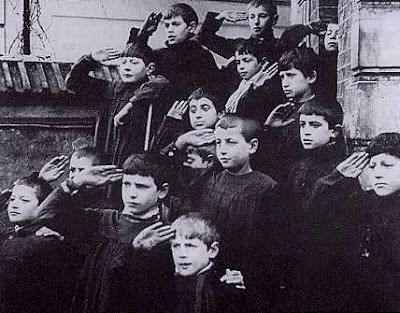 Jean Vigo’s Zero de Conduite (Zero for Conduct) in many ways is an earlier version of Anderson’s film. Filmed more than 30 years earlier, this film also takes place at a boarding school, French this time, where the seeds of rebellion are slowly growing. Here too the boys are hounded by their instructors and anyone bigger than they are, and they can only complain to each other and themselves.

Our three main troublemakers are Colin (Gilbert Pruchon), Bruel (Coco Golstein), and Caussat (Louis Lefebvre). All of the boys are constantly threatened with a “zero for conduct,” but it is these three who seem to be the constant victim. They are given Sunday detention on the first day back at school, and they scheme to find a way to escape their fairly arbitrary punishment, or at least rebel against the people in charge.

This, honestly, shouldn’t be hard for any kids with any sense at all. We see over and over that the various instructors and masters at the school are more concerned with themselves than the boys. In fact, it seems quite often that they are unaware of the boys at all. All of the boys manage to get away with virtually everything they try—plotting openly in front of their instructors, caging smokes immediately behind their teachers’ backs.

There are certainly surreal elements throughout the film, the same sort of detachment from reality that Anderson used in If…. The school headmaster, for instance, is a dwarf and is shorter than virtually all of his students. A drawing created by one of the instructors suddenly animates for a few seconds while he looks on. The headmaster uses a portrait to primp himself, and the man in the portrait reacts as if it is a mirror. On a walk through town, the students continually lose and find their instructor, who is completely oblivious to their presence.

A fourth boy joins the crew. This is Tabard (Gerard de Bedarieux), who is effeminate, a sissy, and a crybaby. However, the one thing he does have going for him is a hiding place for the things that the trio wants to keep out of the hands of their teachers and headmaster, the “ammunition” for the plan that they will enact. When Tabard stands up to a teacher and refuses to back down, he becomes one of the crew for real.

That night, in preparation for the school’s Commemoration Day, they boys plan a revolt. A huge pillow fight ensues, and the boys march off with all of the others in their dormitory in a scene reminiscent of the French Revolution. The next morning, the boys tie a teacher to his bed, then stand the bed up. Other adults pass, not noticing the bizarre display and the four boys leave and barricade themselves in the attic, then assault the proceedings with tin cans and garbage, a scene that will be mimicked with more significant effect in If….

Vigo seems to be saying that the struggle is not necessarily child against adult or student against teacher, but rather conformity versus freedom. The boys are fighting not against doing things they don’t want to do or don’t like, but against things that seem to have no sense or purpose to them. The teachers, with one exception, value conformity for its own sake, while the boys value their own freedom and spontaneity.

Ultimately, this film is surreal and lighthearted, but the message it presents is a legitimate one. How far should we be willing to go to fit in with everyone else? Vigo is willing to offer a surreal distance, while Anderson seems willing to go a lot further.

Why to watch If….: A raw look at violence, repression, and adolescence that resonates more today than it did when it was made.
Why not to watch: School shootings tend to bring things very close to the surface.

Why to watch Zero de Conduite: It’s a French Little Rascals short.
Why not to watch: French. Little. Rascals.
Posted by SJHoneywell at 10:19 PM