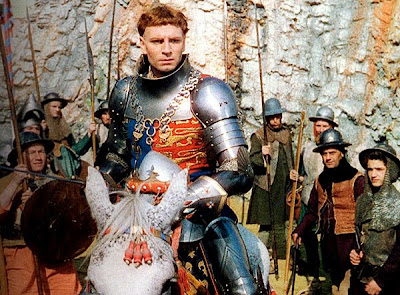 It’s a rare movie that is only one thing, but it is a rare movie that is simultaneously as many things as Laurence Olivier’s version of Shakespeare’s Henry V. It is, of course, one of Billy the Shake’s great history plays if not his greatest of the history plays (it’s my personal favorite at the least). It is also a great story of honor and, based on Henry’s character in the two Henry IV plays, a tale of redemption and a sort of bildungsroman for Prince Harry/Henry V. It is also a fantastic piece of propaganda created in 1944 to return courage to the British people tired after five long years of frustrating war in Europe against the Axis powers. And so, because of this, it is also a grand piece of British mythology. There are great action sequences, making it an action film as good as anything from its era. Finally, because of how Olivier filmed it, it is a meta-story, a play within a play.

So let’s start with the story. It’s mentioned briefly that before his coronation upon the death of his father, the man who would become Henry V, called both Harry and Hal, was a wasted youth. However, the moment his father died, he did an immediate about face and became the sort of king that England wanted—tough, fair, resolute, and determined. Harry wants to press his claims in France, and is immediately rebuffed by the heir apparent of France with a gift more suitable to his pursuits—a case of tennis balls. Henry won’t take this lying down, and sets about invading France.

He wins a few battles, but the defenses of France are not so strong where he attacks, and his men are quickly tired and sick. France takes this as an opportunity to attack the English army, hoping to catch them at their lowest point, but Henry rallies his troops and is victorious at Agincourt, claiming the territory for real which he claimed by birthright.

It is exactly what the people of England needed at that time. Caught in a terrible war against an implacable and terrible foe, the people of England needed something to restore their national pride. Henry V was the medicine they called for, a great past triumph over a foe on the mainland of Europe against a foe that seemed unbeatable. This was the U.S. defeating the Soviet hockey team on a much grander and more important scale, the sort of thing that, while it made no real difference in the war, made every difference in morale.

What’s especially poignant is the scene just after the middle of the film where Henry goes in disguise to talk amongst his troops. What he discovers is that the men know that a hopeless battle is coming to them, and while they may not understand the reasons for the war, they will fight for their king. Henry realizes that the men who die do so for him, and their deaths, essentially, lay on his own head. More to the point in terms of propaganda come in the guise of the two absolutely vicious speeches used to spur his men to war. The first, early in the film at a siege, concludes with the battle cry of “God for Harry, England, and Saint George!”

The second speech, uttered before the battle of Agincourt, is the one everyone knows if they know a little Shakespeare. The St. Crispian’s Day speech is one of the great orations in the history of the theater, and is truly remarkable in the hands of a master like Olivier. Anyone not inspired to kick a little booty after hearing it is someone not to be trusted. Any civilian population of a country at war would gain inspiration from this speech, but none so much as England. An English speech from an English king on the eve of a great battle getting his troops ready for what will likely be their deaths? How could you not stand up and cheer? Consider also Henry’s reaction when it becomes evident that the French leaders pull away from the battle and attack the unarmed men behind the line, slaughtering young boys. Imagine how that resonated with the English population in 1944.

It’s worth noting as well that because the film was intended as propaganda, some scenes were cut. For instance, in the play, Henry hangs his former friend Bardolph as a thief. While a scene in the play that shows Henry’s change of character, here it would display a cruelty not desired in the monarch.

The battle? Think Braveheart minus the blood. There’s death a-plenty as the English bowmen rain pointy death down on the French cavalry, but with 1944’s standards, there’s no hacking off of limbs or faces gashed with swords. Tame by today’s standards, this massing of men on the battlefield is as bloody and gory as things got.

But it’s the meta-story that I find particularly interesting here. Henry V was, after all, written to be performed not on camera on a huge battlefield, but on a stage in front of a live audience. Olivier never really lets us forget that, and much of the opening of the film does take place in a mock up of the Globe Theater, complete with an audience mocking the action on stage. This shifts, courtesy of our narrator, to a more traditional film twenty minutes or so in, because Olivier isn’t going to let us go away without that huge battle sequence. And yet, the actors remain the same. Olivier as Henry, at the start of the film, is an actor on a stage playing a part in a play. And then, suddenly, he’s Henry himself.

But Olivier never really lets us forget that this is a stage play. Many of the sets, while no longer on a stage, are obviously faked and painted to look like stage backdrops. The actors obviously wear makeup, Henry himself sporting some lovely eyeshadow when he delivers the Crispian speech. Because, despite the fact that we are watching men on the battlefield, we’re really still back in the Globe Theater with the patrons there, transported to this place by the power of the play and our own imaginations. And when all is said and done, it is to the Globe that we return.

It’s a hell of a story, a hell of a play, and a hell of a movie. I may prefer Kenneth Branagh’s version simply because of the modern touches Branagh used, but Olivier’s version is justifiably a classic, and one of the greatest adaptations of one of the best plays by the world’s greatest playwright ever made.

Officially, the full name of this film is The Chronicle History of King Henry the Fift with His Battell Fought at Agincourt in France. Yes, “Fift.”

Why to watch Henry V: Shakespeare as it should be.
Why not to watch: You think Shakespeare is boring.
Posted by SJHoneywell at 11:03 PM