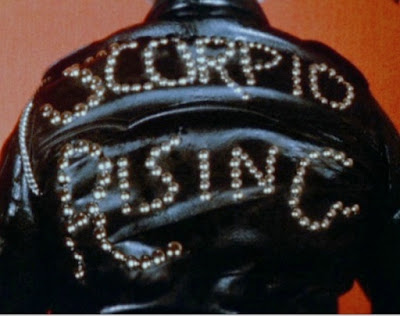 If you’ve seen on gay Nazi biker film, you’ve seen them all. Or really not, because there really isn’t much like Kenneth Anger’s Scorpio Rising, or at least there wasn’t before Anger made this film. This is a difficult film to follow and even more difficult to understand. I’m honestly not sure that I really get it, but I’m going to try.

Scorpio Rising is more or less a homoerotic short film about bikers. There’s a lot of leather, some religious iconography, some Nazi images, and a lot of homoeroticism. Additionally, there’s no dialogue in the film. Instead, Anger uses popular songs from the '50s and early ‘60s to highlight what is happening on the screen. Guys work on their bikes, get dressed in a lot of leather, smoke, take some drugs, read the Sunday comics, ride on their bikes, and initiate a new member. That’s pretty much it.

Yes, you read that right: a gay Nazi biker film has had a tremendous effect on much of what was made since its debut in 1964. Kenneth Anger is not only one of the first (if not the first) to use actual known songs in his film rather than music created specifically for the movie (at least the first who didn’t use old songs for a musical), and quick cuts, including pieces of other films just to make things interesting.

The cuts get progressively faster and more difficult to follow as the film goes on, and this makes Scorpio Rising progressively more difficult to watch. There’s no question that Anger was intending this to be something like softcore pornography, as that covers the bulk of what he made in his career. The scenes of men getting dressed, the initiation of the new biker involving dumping mustard on his genitalia, all of these are there because, per the legend, Anger used this film as masturbatory fuel.

And yet, whether true or a legend, those scenes of bikers putting on their leathers continue to resonate today. Every time you see a hero or a gang of heroes gearing up to get ready for battle, from Army of Darkness to the campiest of the Joel Schumacher Batman films, the director is paying homage to Kenneth Anger. In their own world, the director may claim to be paying homage to someone else, but ultimately, it goes back to here. Anger, for whatever reason he did so, essentially created the gearing up for war montage.

This is a difficult film to watch, not because of particular images or anything disturbing, but because it’s difficult to follow. I can’t say that I loved the film, but it certainly was a worthy challenge. I’m also certain that there’s a lot here that I’ve missed. Someone much smarter than I am can do it better justice.

Why to watch Scorpio Rising: Influence.
Why not to watch: You have issues with homoeroticism.
Posted by SJHoneywell at 11:55 PM