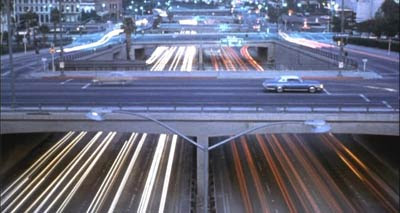 I first watched Koyaanisqatsi either at the end of my tenure in high school or shortly thereafter. At any rate it was more than 20 years ago. The second time I watched it was tonight. I’d love to say there are specific scenes and things I remember from this film over 20+ years, but that wouldn’t be precisely true. It would be precisely true, however, to suggest that I do remember it and tonight recalled much of it nearly intact from all those years ago.

Koyaanisqatsi, a Hopi word meaning “life out of balance,” is a film of surprising beauty and power, or at least I find it so. I can see how many would find this film either dreadfully dull (see: Jeanne Dielman) or nearly unwatchable. There is no plot as such, and no dialogue. Instead, we are presented with constant images of landscapes, nature, clouds and then a subtle shift into technology, industry, and masses of humanity. Some of these images rush by at a frenetic pace while others are shown in slow motion, unfolding before our eyes. Time-lapse photography makes up a great deal of this film, which runs at an increasing and increasingly disturbing pace through its near 90 minutes.

Most of what sticks is not one image flowing into the next or a particular sequence, but snapshots. A mushroom cloud unfolding and growing, shot over the outstretched arms of a cactus. Airplanes doing a balletic dance in preparation for take off. The moon, huge and almost artificial looking, rising and being eclipsed by an office building. Banks of clouds reflected in the glass and steel of massive high rise structures. Oceans of people fighting their way onto an escalator. Lines of cars driving endlessly into the night, mere streaks of headlights with the speeded up camera.

It is dizzying in its effect, and challenging to watch. Very little is shown at its regular speed. We pause languidly over mountain passes, deserts, mesas standing against too-blue skies. We rush headlong through factories, watching cars and computers being built at breakneck speed. Almost all of the human motion is shown at near-blinding pace, and that which isn’t is slowly and inexorably speeded up as the film progresses, pushing the pace of human life ever faster, ever onward.

While the film itself is an achievement artistically, it would be very little without the tremendous and gripping soundtrack by Phillip Glass. This I do remember specifically. The chanting beginning, low and slow voices repeating the name of the film, the voices and music sounding somehow like the Hopi from which the film name comes. The music changing and becoming more and more wild and uncontrolled as the footage becomes similarly speeded up and relentless. I can’t claim to be a huge fan of Glass, but this music makes the film what it is. Without it, it’s striking, juxtaposed images. With the music, it’s a real statement. Glass knows what we are expecting—we need musical resolution of themes and we are waiting for particular chords or notes to be struck to resolve the theme that has played, and he keeps this from us, continuously building tension as the images go faster and faster in front of us. We need the release of those notes, and he keeps them from us for a painfully long time.

This, of course, is intentional. It is, after all, “life out of balance,” and to give us the resolution would work against that idea. The fact that we can’t have the resolution is what keeps us out of balance, keeps us waiting and waiting for that thing that we need and cannot get. For a film without plot or dialogue, this is riveting stuff, and the images wouldn’t convey nearly the same power without this additional tension pulling on us.

A few years after this film came out, David Byrne of Talking Heads fame released a film called True Stories. It’s a personal favorite of mine, a film I dearly love every time I watch it, and one that does not get spoiled in the retelling. Much of Koyaanisqatsi reminded me of True Stories, but that isn’t surprising. Byrne certainly watched this film, and duplicated both the music in places as well as much of the style of camera-moving-across-buildings visual look. It’s either parody or homage, and I’m prone to think that it’s homage rather than poking fun.

Koyaanisqatsi is not a film for everyone. It is not completely accessible and requires a great deal from its audience for it to be appreciated. It’s worth the effort. When this whole thing is done, I’m going to seek out the other two films of this trilogy: Powaqqatsi (life in transformation) and Naqoyqatsi (life as war).