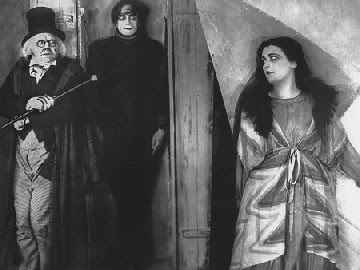 Before we start, it’s worth noting that both of these films are great, and both rely on a shock at the end that is worth enjoying if you’ve never seen them. Don’t read the spoilers unless you’re already familiar with how these end.

I’ve said this before, but it bears repeating now and again. I knew going into this that there were films I wouldn’t like or that would be difficult to watch. I haven’t watched things like Eraserhead yet on purpose because there’s only so much completely freaking myself out that I can handle in a given month. I’m sure I’ll find something along those lines in April since March has close to run its course at this point, and I’ll be good again for another six to eight weeks.

Additionally, there are genres that are more difficult for me than others. I don’t love musicals in general, and so I don’t watch a lot of them. In fact, I can probably count on one hand the number of musicals I’ve watched so far this year—it’s a genre I need to start working on very soon. I’ve done better with foreign films. I like foreign films often enough, but they require intense concentration. I should do a little better and try to get through one or two every week at least. I’ve done very well so far with silent films, and have watched probably a larger percentage of them than the number on the list warrants. Like foreign films, silents require intense concentration—I have to be mentally prepared for them.

Today’s first film involves two of the genres I’m less apt to watch on a given day—it is silent and foreign. Das Kabinett des Dr. Caligari is considered the first true horror film, but it is difficult to really call it thus. Like many films that came from this particular German tradition, the film explores ideas of fantasy and reality, sanity and insanity.

We start with a young man named Francis (Friedrich Feher), who is sitting in a garden with an older man. Francis sees a young woman walk past, not noticing him or the older gentleman. He claims that the woman is his fiancée, and that the two of them have been through a series of terrible trials, a story he will now unfold.

Francis’s two best friends are Alan (Hans Heinrich von Twardowski) and Jane (Lil Dagover). They go to a carnival where they encounter Dr. Caligari (Werner Krauss) and his sleepwalker, Cesare (Conrad Veidt). While Cesare spends all of his time asleep, he is capable of telling the future when he is woken up. Alan asks for his future, and is told that he doesn’t have one—he will die at dawn.

The prophecy comes true, and for the viewer, it is evident that the killer is the somnambulist Cesare himself. Another failed murder leads to a crazed local as the perpetrator, but Francis is still convinced of the guilt of Dr. Caligari, and continues to press his investigation, convinced that Caligari is the madman behind the rash of killings. To stop this investigation, Caligari tells Cesare to kill Jane. Naturally, Francis is correct about the identity of the true madman.

Cesare dies in his attempt to kill Jane, and Caligari vanishes. It also becomes evident that the somnambulist who stays in Caligari’s cabinet is nothing more than a dummy. And now the hunt is on for Caligari.

In its own way, The Cabinet of Dr. Caligari is something of an extended middle finger to the audience, because it becomes evident when Francis finds Caligari near the end of the film that Caligari is actually a psychiatrist and Francis is one of his patients. Jane is as well, and she’s as completely lost in her own delusional world as Francis, and so is Cesare. What has gone before has not been a story of truth, but instead has been the ravings of a madman. We’re seeing his delusional world instead of the reality of the story that brought him here.

It shouldn’t necessarily come as a huge shock, though, because hints have been given along the way. We get a very realistic world in the opening and closing scenes, but something very different in the middle, the main part of the film. Nothing truly looks real. Instead, the world looks as if a child has drawn and populated it. Nothing exists on a straight angle. Houses are canted and tilted oddly, windows are an uneven shape, even floors and doorways are irregular, vague trapezoids instead of rectangles. The people as well are caricatures of reality. Cesare, with white face and black-rimmed eyes is from a child’s imaginings rather than reality. This is the world seen through the distorted lens of Francis’s madness. 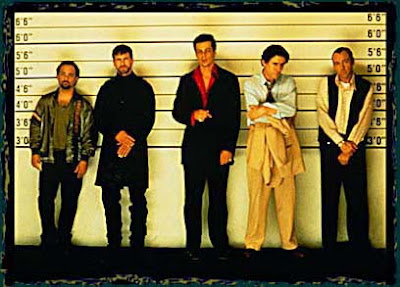 In ways that will be revealed in the spoilers that follow, The Usual Suspects bears a lot of similarity to Caligari. Here we have an elaborate crime drama that, like many films, starts at the end. We see a brief conversation on a burning ship. One man we can see, who is wounded and another who is not. The wounded man is shot and killed, and the ship bursts into flame.

From here, we are taken in flashback through the rest of the film. First, we are introduced to our major players, and are taken through our truly all-star cast. Five men are arrested in connection with a stolen truck of weapons. In the line-up, each man steps forward and reads off a sentence, and from each, we get a capsule of their various and varying personalities.

First is Hockney (Kevin Pollak, an actor I almost always enjoy). Hockney is world-weary and beyond caring about anything, a man who has seen and done it all and is bored by whatever is left. Next is McManus (Stephen Baldwin, in easily the best role of his career). McManus is only slightly in control, apt to go off on wild, ADHD tangents at a moment’s notice. Third is Fenster (Benicio Del Toro), who speaks in the most unintelligible patois ever conceived. Fenster pals with McManus and doesn’t always seem all there. Fourth is the real prize of the line-up: Dean Keaton (the always underrated and tremendous Gabriel Byrne). Keaton is a former-cop-turned-crook-turned-businessman, who brooks nothing and is willing to do anything to keep what he’s made of his life. Last is “Verbal” Kint (Kevin Spacey), palsied, pathetic, and oddly proper. We get more of the same in the interrogations of the five men. By the time this scene is done, we know as much as we’ll need to about these five men.

The five men are thrown in a holding tank together, and McManus decides that it’s a good idea to get back at the police for this current indignity. The idea is to damage the reputation of the police, have a little fun, and make a little money at the same time. “New York’s Finest Taxi Service” is a corrupt group of NYC cops who happily drive criminals from one place to another for a large fee. The job is to catch a group of dirty cops in the act, cause some consternation, and get away with the money.

Meanwhile, back at the boat, there’s an investigation taking place from the FBI in the person of Jack Baer (Giancarlo Esposito), who looks straight out of a ‘40s noir. One of the survivors of the massacre on the boat is that very same Verbal Kint, who is now in custody at a New York police station under the tender care of U.S. Customs agent Dave Kujan (Chazz Palminteri) and police sergeant Jeff Rabin (Dan Hedaya, who should get more roles like this one).

Verbal talks at length to Kujan, telling of the attack on New York’s Finest Taxi Service, and the aftermath. This aftermath involved a mythical criminal mastermind named Keyser Soze. Soze is legendary for being untouchable, unknown, and completely vicious. The story of Soze’s past Verbal tells is of a time back in Turkey when a rival gang captured Soze’s family. Soze, finding the men in his house, kills his family, claiming that he’d rather see them dead than in the clutches of such inferior men. And from that moment forward, Soze builds his legend, destroying everything of those men, killing their families, their friends, the people they knew, and then disappearing to run a massive criminal underground empire.

It seems that each of the five men from the lineup crossed Soze at some point in the past. According to Soze’s contact, a lawyer named Kobayashi (Pete Postlethwaite, who is one of those “that guy’s” and better than many of his roles), these five men owe Soze a job for past problems. Their job is to destroy the cargo of a ship—the one from the start of the film.

It’s not revealed until the end that this movie has anything in common with Caligari, but when that comes out, it comes out for real. What we discover at the end, the very end of the film, right when it feels like the audience understands everything, the rug gets pulled out from under all of us.

Dave Kujan is convinced that Dean Keaton is really still alive, and that Dean Keaton is Keyser Soze. And it all fits. Everything that Kujan says at the end fits perfectly with what we know and what we’ve been told. But it’s all a lie. Dean Keaton really is dead, because Verbal Kint is really Keyser Soze. He’s the one who has been weaving the entire tale, which means that, once this is revealed to us, it becomes evident that there is no way to tell exactly how much of the story we’ve seen is real.

It’s a great story—a fun and entertaining ride, with exciting twists and turns, intrigue, and violence. And yet, like the story we see in Caligari, it’s all a sham, and likely, all coming directly out of the head of Verbal/Keyser.

Movies can be wonderful things. At some level, all movies, even those based on real life, are little trips into another world. Sometimes, as with these films, our trip into that other world takes a few additional twists and turns before that world comes to an end for us.

Both of these films can be infuriating, but both are also worth that risk.

Why to watch Das Cabinet des Dr. Caligari: It’s where horror movies, psychodrama, and a great deal of thrillers came from.
Why not to watch: A long-dead director can still tweak you.

Why to watch The Usual Suspects: A ripping yarn like no other
Why not to watch: The holiest of holy shit endings that might really piss you off.
Posted by SJHoneywell at 11:27 PM