Not the Plot You Expect

Films: The Phantom of the Opera
Format: Internet video on laptop. 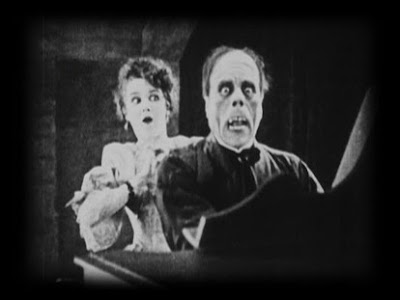 Whatever they may be, filmmakers generally speaking aren’t stupid. They know what appeals to their audience, and then they do everything they can to supply that to the audience. For instance, romantic comedies tend to follow a very basic formula. The reality is that the things that guys do in rom-coms that make women say “Awwwww!” while watching them would make most of them say “Ew!” in real life and get a restraining order. But the fantasy is there, and that’s what women (the audience for these films does, after all, tend to be women) want to see.

When Andrew Lloyd Webber turned The Phantom of the Opera into a musical, he played up the romantic angle, mainly because that’s what his audience wanted. When Joel Schumacher made the film version of the musical, he did the same thing. This does not surprise me. In fact, it makes perfect sense. The fantasy is, naturally, the woman who is desired by two hunky, sexy men (Gerard Butler and Patrick Wilson in this case). What woman wouldn’t want to be in that position?

The silent version of this film from 1925, however, is not what a Phantom fan might expect. Obviously, as a silent film, there’s no spectacular Andrew Lloyd Webber soundtrack. But this is not a romance.

It’s not, and nothing makes it one. The Phantom (Lon Chaney) is not a tragic figure pining away for the love of the beautiful and talented Christine Daae (Mary Philbin). That may well be what a modern audience expects from the film, based on what they’ve seen in the modern version of the story. Instead, Erik the Phantom is a terrible, terrible creature. His disfigurement (a creation of makeup and stagecraft that is still fantastic and powerful) doesn’t mask a pure heart burning with misunderstood love. Instead, he is brutal, conniving, and cruel.

Erik loves Christine, but Christine is in love with the dashing military officer, Raoul (Normal Kerry). Erik forbids this love, and also forbids Christine’s rival Carlotta (either Mary Fabian or Virginia Pearson, depending on the edit) from performing at the opera. When Carlotta does perform, Erik causes the great chandelier to crash into the audience. He also kidnaps Christine, continuing to forbid her from seeing Raoul.

At first, Christine is willing to do what Erik tells her, but then she catches sight of his disfigured face, and she realizes that she must get away from him. Erik threatens to destroy the theater if she will not marry him, and she consents, but only if Erik will also rescue Raoul from a deathtrap in the bowels of the theater.

Chaney’s makeup design for the Phantom is famous, and deservedly so. His nose is pulled up, ears flattened back, and forehead heightened to give him the appearance of a skull. Additionally, greasepaint was used to create bulging eyes and narrowed cheekbones. While most of the techniques he used to create the look have been figured out, there are still some mysteries in how he did everything, evidence that Chaney truly was a master of his craft.

He wears the mask through much of the film, and while the reveal of the Phantom’s face is still a fantastic moment, in many ways the mask is more disturbing. It’s a blank face covering the forehead down to the upper lip (not the half-face thing that has become iconic) with a cloth covering the mouth. The blank, almost cherubic expression on it is, effectively, not unlike the Michael Myers mask from Halloween.

Regardless of the film’s importance—and it is important in many ways—it’s not that easy to watch as a modern film viewer. The print that exists is very dark in places and frequently patchy. Beyond these inconsistencies and minor issues, which can be overlooked by the dedicated viewer, the film itself is a very traditional silent movie. The characters all overact because they don’t have sound to use to help them. Shocks are registered with upthrust arms and huge, gaping mouths. A cluster of ballerinas, terrorized by thoughts of the Phantom early in the film all throw up their hands in unison when startled, an effect that is comic to a modern audience. Additionally, one of the ballerinas frequently spins in a circle when agitated, making her look like a sheltie in a tutu. That’s the style, of course, but it’s very affected to someone used to more subtle performances.

Silent comedies work for me. A guy falling on his ass is funny whether you can hear it happen or not. Dramas are simply more difficult for me to watch. This is still worth seeing, but plan for something of a rough ride.

Why to watch The Phantom of the Opera: Lon Chaney’s makeup is still staggering, and it’s a great story.
Why not to watch: It can be pretty hard to watch for a variety of reasons.
Posted by SJHoneywell at 10:09 PM

Email ThisBlogThis!Share to TwitterShare to FacebookShare to Pinterest
Labels: horror, Rupert Julian, The Phantom of the Opera