The Name Says it All 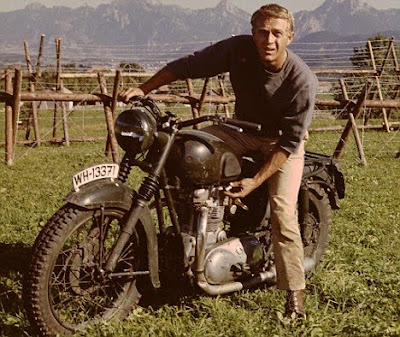 I made the comment a couple of months ago that many of the great World War II films involved military prison. It still surprises me that Stalag 17 isn’t on this massive list, because it certainly should be. It came as no shock when I compiled my version of the huge number of films to watch that The Great Escape was there. Of all military prison movies, none are bigger or more ambitious.

A simple look at the cast list confirms this. It’s impossible to tell who stars in this movie because there are a metric ton of major stars in this film—Steve McQueen, David McCallum, Richard Attenborough, James Coburn, Charles Bronson, James Garner, Donald Pleasance, and on and on. These are actors who carry their own movies, and here they are all playing in the same swimming pool.

The Great Escape is based on a real story of Allied prisoners escaping en masse from a German POW camp. It starts with the first day of the camp, created to keep the worst escape offenders in one place, and ends with the return of a number of the prisoners to the camp. Between, it covers the creation of the three tunnels used to escape from the prison camp as well as the creation of the various plans designed to both get men to safety and confound the German Army with the prisoners released behind enemy lines.

What is fascinating to me about this movie is how little happens through so much of it. A huge part of the movie is about the process of creating the tunnels, finding the materials, dyeing and changing the prisoner uniforms to civilian outfits, and arranging to get as many men out of the prison at once as possible. The actual prison break itself takes up a good chunk of the film as well, and only the last portion of the film involves the prisoners out in Germany.

What makes this film work is not the actors, but the story itself. The author of the book the film was based on, Paul Brickhill, was one of the prisoners in the camp in World War II. He held out on having the film done until he could get someone to agree to stick to the actual story without Hollywooding the reality of the prison camp. It was absolutely the correct decision, because the story doesn’t need to have little coincidences and additional drama added to it.

Because the focus isn’t on the actors themselves, and they aren’t specifically needed to be brilliant to make the story work, they’re allowed to be freer with the roles. It’s almost as if the pressure was off the cast because the story they had to work with was so good. Because of this, they all work well together in every scene. There’s no pushing to take the focus of the audience from the other actors. Essentially, they work brilliantly as an ensemble. It doesn’t even matter that Charles Bronson is rocking a Polish accent or that James Coburn is attempting to sound Australian.

Ultimately, it doesn’t really matter who is in the roles provided the roles are acted well. The Great Escape is a ripping yarn, exciting and in no need of anything other than the fascinating story it tells.

Why to watch The Great Escape: One of the great stories from World War II.
Why not to watch: Bad accents.
Posted by SJHoneywell at 10:16 PM