Films: The General, To Be or Not to Be
Format: DVDs from Rockford Public Library on big ol’ television. 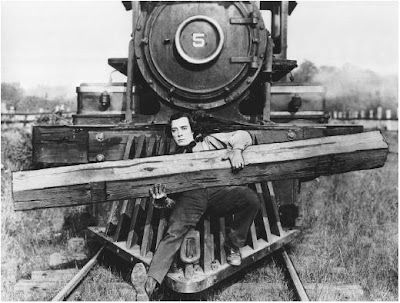 Silent movies are a tough sell for a modern audience. I had a phone call today with a group of fellow college instructors, most of whom will be teaching a film class this coming quarter. I’ve taught the class once in the past, and another instructor and I helped rewrite a general curriculum as a guide this past quarter. One instructor, a veteran going into his fifth or sixth time teaching this class commented that he generally shows at least one silent to his class every year. He’s going with Keaton’s Sherlock Jr. this year, a film I’ll be watching eventually.

I asked him if he tends to go with silent comedies, and he confirmed this, saying that Keaton or Chaplin tend to be his choices. Silent films are a tough sell, but silent comedies still work. The reason is that funny is funny, whether it be in Technicolor or black-and-white, in Sensurround or with nothing but a guy playing the piano over it. And Keaton is damn funny, even today.

The General is, and I’m really trying not to overuse this word, Keaton’s masterpiece. It’s brilliant from start to finish. It’s funny, action filled, entertaining and wonderful. There’s a reason that it still shows up on greatest films ever made lists 85 years or so after it was created. Had the book that inspired this odyssey of mine been “The 101 Films You Must See…,” I’m convinced that The General would have made the 90% reducing cut.

The film begins just before the start of the American Civil War. We are introduced to Johnnie Gray (Keaton), who drives an engine for the Western and Atlanta Railroad. We’re told that Johnnie has two loves in his life: his engine, the General of the title, and his girl, Annabelle Lee (Marion Mack). Johnnie goes to visit Annabelle, and while he’s there, news comes of the attack on Fort Sumter. Annabelle’s father (Charles Henry Smith) and brother (Frank Barnes) go to enlist, and Johnnie follows along.

What happens next sets up the entire film, and has become a staple of comedies ever since. When Johnnie tries to enlist, he is refused. The reason is simple. He’s far more valuable as an engineer than he would ever be as a common soldier. He’s refused, but he fails to ask why, and the agents don’t tell him. A simple question from Johnnie would end the film. Instead, it appears to Annabelle and her family that Johnnie is a coward. Annabelle, heartbroken by Johnnie’s evident cowardice, tells him that she will not speak to him again until he is in uniform.

A year later, Johnnie’s train is stolen by Union spies. Unbeknownst to Johnnie, Annabelle is kidnapped along with the train. What follows, the rest of the movie in fact, is a merry chase as Johnnie pursues his beloved engine and girl into enemy territory and back, acting first as the pursuer and then as the pursued. Along the way are a number of comedic set pieces that demonstrate exactly why Keaton was so beloved in the early days of film and why he is still influential now. He deals with the problems of running his train solo, loading and firing a cannon, avoiding the shot from that same cannon, dealing with a torrential downpour, figuring out how to rescue Annabelle, and getting himself back across to friendly lines while having what seems like half the Union Army on his tail.

Keaton’s trademark, evident in this film as much as anywhere, is his constantly unchanging expression. He is capable of conveying almost any emotion with his notably stony face, often simply by the way he blinks in disbelief or holds himself. The cannon bit is perhaps the best example of this. After hooking up a car with cannon to his engine, Johnnie continues pursuing the Union soldiers. He loads the cannon and sets it to fire, but manages to disconnect the car as he climbs back to the engine. The cannon tilts down, aiming itself at Johnnie, who tries to get away, but his foot gets caught in a chain, leaving him trapped in the cannonball’s impending path. Eventually, he frees himself, the cannon fires, and the shot misses anyway.

What I like about Keaton’s films is how different they tend to be from many of the current comedies that feature main characters who are blindingly stupid and succeed only because the people set against them are equally stupid or because our supposed heroes are extraordinarily lucky. Keaton’s heroes certainly have their share of screw ups, goofs, and missteps, but they are also incredibly resourceful, and tend to be successful because they are smart, talented, or both. Johnnie Gray is that, which means that at least for me there is no shame in rooting for him to come out on top.

The great set piece here is the train crash into the river. This is before the days of great special effects, which means it was a real bridge, a real river, and a real train. The effect is still magnificent, and the train remained there until it was used for scrap iron during World War II. 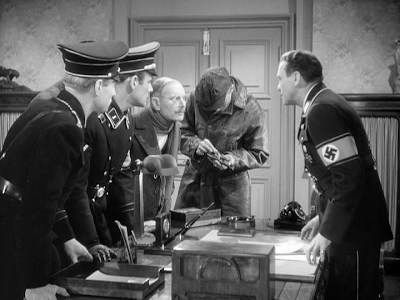 Like Keaton, Jack Benny is a performer whose star has faded more than it should have—certainly more than even Keaton’s has. A major star in his own time, many people these days know virtually nothing about him. I’m just as guilty. Aside from knowing that he claimed to stop aging at 39 and was stereotypically stingy (answering “I’m thinking it over” to a mugger who asked for his money or his life during a comedy routine), I don’t know much about him, and have never seen him in anything until tonight.

To Be or Not to Be also starts at the beginning of a war, this time World War II. Set mainly in Poland, it follows the careers of stage actors Josef Tura (Benny) and his wife Maria (Carole Lombard, in her final role before a fatal plane crash). The Turas are the toast of Warsaw, and Tura is certainly the toast of himself. Something of a ham, Tura is both concerned with constantly getting the top billing and making sure that his wife is doing nothing she shouldn’t with men he doesn’t know.

Of course, the war starts, and Poland is caught in the thick of it. A young bomber pilot (Robert Stack) who is infatuated with Maria Tura ends up in England with a group of free Polish fliers. They wine and dine a Polish professor (Stanley Ridges) who confesses that he is heading to Warsaw on a secret mission. The young Poles give him the names of their relatives so that he can look in on them. The pilot, Sobinski, asks for the professor to look in on Maria Tura.

However, Sobinski becomes suspicious when it is revealed that the professor has no idea of who Maria Tura is. According to the still-infatuated Sobinski, it would be impossible for anyone in Warsaw to have not heard of her, leading him to suspect that Professor Siletsky is a Nazi collaborator. He is airdropped into Warsaw to warn the underground.

As it turns out, Sobinski is right; Siletsky is a Nazi, and he’s working on helping the Gestapo round up and destroy the underground movement. Now, Tura, his wife, and the remains of their theater company must stop Siletsky from reporting the members of the underground movement to the Nazis, do away with the man, and (with luck) survive. To do this, they must impersonate the local Nazi hierarchy and break into Siletsky’s hotel. Leading the way is Josef Tura, who, in addition to wanting to help save his country, also wants to give the performance of a lifetime and keep Sobinski away from his wife.

For such a serious topic, and it is gravely serious, this film is played constantly for laughs. Near the beginning, Sobinski has been sending Maria flowers anonymously. He finally contacts her, and she tells him to come to her dressing room when her husband, who is playing Hamlet, begins his “To be or not to be” speech. Moments later, Tura walks out on stage and begins the famous soliloquy and Sobinski stands up to head to the wings. However, Sobinski is in the second row, and his making for the exit causes a huge commotion.

This scene is the heart of this film. In addition to its plot ramifications, it is screamingly funny. Sobinski’s actions, however motivated, are the single worst nightmare of a serious actor—someone has decided to walk out during a key moment of the drama, completely spoiling the trance of the audience and ruining whatever effect the actor might want. There could be no bigger insult. Tura soldiers on, but the scene is ruined, and when the young bomber goes back stage, Tura’s marriage is suddenly in danger as well.

It’s interesting to note that both of these films, in addition to being comedies set during wartime, were critical and financial failures upon release. In fact, the release of The General caused Keaton’s film company to restrict him in the future, since the film had been so expensive to make and returned so little on the investment.

It seems like over and over authors and filmmakers both discover again and again that while war is hell, it also has the potential for humor. We laugh so that we don’t cry, or to cover our tears. We laugh because we have to, because that is all that keeps us sane. It’s what created M*A*S*H, Stalag 17, and Catch-22, and it’s what created these films as well. Mel Brooks remade To Be or Not to Be in the mid-80s with certain competence and a lot of humor, but it’s simply not the same as the original.

Why to watch The General: Perhaps the greatest silent comedy ever made.
Why not to watch: Silent films, even comedies, don’t play well today.

Why to watch To Be or Not to Be: You owe it to Carole Lombard and Jack Benny.
Why not to watch: You’re uncomfortable with the idea of humor and Nazis in the same place.
Posted by SJHoneywell at 10:50 PM

Email ThisBlogThis!Share to TwitterShare to FacebookShare to Pinterest
Labels: Buster Keaton, Clyde Bruckman, comedy, Ernst Lubitsch, The General, To Be or Not to Be, war