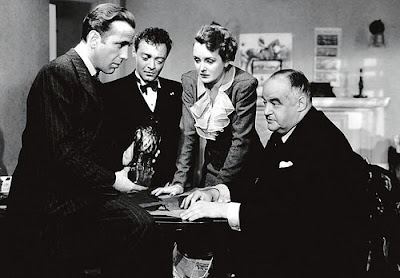 There’s a reason why his role as Sam Spade is still so revered today. Bluntly, it’s because it was and still is one of the great screen tough guy roles, and one that’s impossible to see someone other than Bogart in, despite the fact that his version of The Maltese Falcon is actually the second film of the same name, and essentially the third version of the same story.

Like any great noir, the plot is a complicated one. Spade (Bogart) and his partner, Miles Archer (Jerome Cowan) are hired by a woman calling herself Miss Wonderly (Mary Astor). Her sister has gone missing because of a man named Floyd Thursby, who ran off with her. She’d like Spade and Archer to find Thursby and return her sister. Archer, enamored of the young woman, says he’ll go. Sadly for Miles, he doesn’t so much find Thursby as find a slug from a pistol in his heart, leaving poor Sam Spade partnerless.

Of course, it’s far more complicated than that. Thursby catches a quartet of bullets himself, and Spade is an immediate suspect. Making Spade’s life more complicated is Miles’s widow, Iva (Gladys George), who has an unrequited crush on Spade, making her something of a suspect in Archer’s death as well. Of course, that’s not all, either. It turns out that Miss Wonderly is actually Brigid O’Shaughnessy, and she has a problem. She’s connected with a group of thugs looking for a black statue of a falcon.

In addition to Brigid, the crew looking for the bird include Joel Cairo (Peter Lorre), an effeminate little man who smells of gardenia; Kasper Gutman (Sidney Greenstreet), a fat man who wants nothing more than the bird at any cost; and Wilmer Cook (Elisha Cook Jr.), a gun happy kid who does anything Gutman tells him and otherwise threatens whomever bugs him, which is everyone.

The bird is sort of the cinema’s greatest MacGuffin. A present for the King of Spain from the Knights Templar. It never made it to the king’s hands, though, and has been floating around the world between the hands of collectors since. Its value is incredible, worth the lives of Archer, Thursby, and eventually the captain of the boat that brings it into San Francisco.

The actual statue of the falcon is, ultimately, sort of unimportant. What is important is what everyone will do to get it, which is pretty much anything they can think of that’s worth trying. In the middle of all of it is Spade, who plays the whole caper as a vaguely crooked shamus, out for himself and looking to make a few bucks when he can.

The plot here is a doozy, but it’s Bogart who makes the whole thing work. He plays the whole caper as if he always knows what he’s doing, and he always seems to. He knows the right moves, and knows how to deal with everyone he encounters. The only thing I can’t understand is why he doesn’t do the obvious—marry his secretary, Effie Perine (Lee Patrick). She always knows what he needs and does everything for him, and it’s pretty evident that she’s crazy about him. Brigid O’Shaughnessy may be a hot little number, but she’s nothing but trouble. 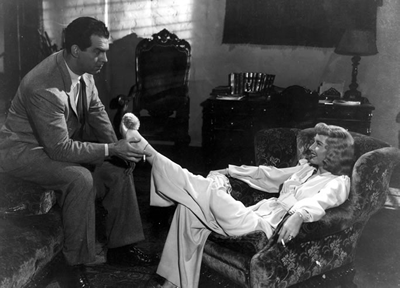 The only noir that might be better than The Maltese Falcon is Billy Wilder’s Double Indemnity. Again, as with any classic noir, we’ve got a complex plot and people who should know better doing bad, bad things. Standing at the center is Walter Neff (Fred MacMurray), an insurance salesman who is pretty good at his job, but is always on the lookout for something better.

He finds that something better when he stops by the home of a man named Dietrichson, who needs to have his car insurance policies renewed. What Neff didn’t expect was Dietrichson’s wife, Phyllis (Barbara Stanwyck). She’s a looker despite the blonde wig that makes her look a little like one of the founding fathers. The two have an immediate connection with each other, but neither one seems ready to act on it right away.

What Phyllis is really interested in, though, is getting an accident policy on her husband, preferably without his knowledge. That way, should he die while on his job, Phyllis would collect—the perfect set-up for a murder. It doesn’t take Neff long to cotton to the idea, mainly because Phyllis is as much of a prize as the money.

Neff develops the perfect plan. If Phyllis can convince her husband to take a trip on the train, Neff can kill him, and if it looks like an accident, the policy will pay off double. If they can pull it off, they’ll get Dietrichson out of the way, and walk away with a cool $100,000. The biggest issue is Barton Keyes (Edward G. Robinson), the claims adjuster. Keyes can always tell when a claim wasn’t on the up and up, and no one does the job better.

Of course, the murder goes off, thrillingly filmed not by focusing on Neff strangling Dietrichson, but by watching Phyllis staring straight ahead, a faint smile on her face while her husband dies in the seat next to her. Neff boards the train pretending to be Dietrichson while Phyllis dumps the body on the tracks, and the deed is done.

From here, the rest of the film is a cat and mouse game between Phyllis, Neff, and Keyes. Neff and Phyllis want nothing more than to be together but can’t be, and can’t trust each other. Keyes sees that there’s something funny about the claim, but can’t bring himself to accuse Neff, who he is fond of. Things continue to spiral out of control for everyone until the inevitable conclusion.

Double Indemnity is told as a flashback, with Neff narrating the story into a Dictaphone. The ending is something of a foregone conclusion, but the getting there is so interesting, there’s almost a hope that everything will turn out in the end.

Little touches make this film work even more than it normally would. After dumping the body, for instance, Phyllis and Neff run back to the car. For a good thirty seconds or so, the car won’t start, almost blowing the entire scam for the two of them, previewing the tension that will come in the second hour of the film. Neff repeatedly lights matches for Keyes’s cigars, a wonderful touch that is finally reciprocated at the end of the film.

How good are these films? As good as they get. The Maltese Falcon is both a fantastic story and a beautifully filmed affair. Sam Spade is one of those guys that, like Buckaroo Banzai, the average guy would love to be. He’s the reason that detectives are looked at as guys men want to be. Spade is cool, and women dig him.

Double Indemnity contains an equally gripping and entertaining plot. The real reason to watch, though, is Edward G. Robinson. Since his first major starring role, Robinson had always played starring roles, and almost didn’t take this role because it was a supporting one. He makes it his, though, and he is a real joy to watch. Equally great is Barbara Stanwyck who is both gorgeous and cold, the perfect femme fatale.

Both films could not be better and should be enshrined as they are forever. They should never be remade (remade again in the case of The Maltese Falcon), colorized, or touched except to be watched again and again and enjoyed again and again.

Why to watch The Maltese Falcon: Everything about it is fantastic.
Why not to watch: You’re an idiot.

Why to watch Double Indemnity: Edward G. Robinson rocks, and Barbara Stanwyck is scary.
Why not to watch: There is not a single reason to not watch this film at least once a year.
Posted by SJHoneywell at 11:21 PM