Heading to a Finnish 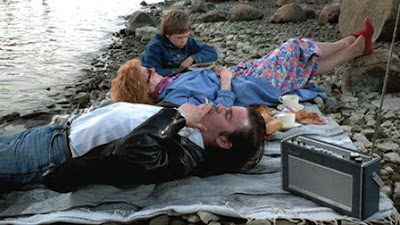 I’m slowly making my way through the list of movies both in terms of watching them and in terms of finding them. I’m hoping to have that part of the task completed by the end of March. It’s always exciting when I locate a film that I thought I’d have a hard time getting. Such was the case with Ariel. I stopped by the Rockford Public Library today on my way home from work, and there it was, right where I’d looked half a dozen times and evidently skipped over half a dozen times.

Ariel is a weird little movie. There. I said it. And I do mean little. It's 72 minutes long.

As it stands, I don’t really know what to do with things that are Finnish. I don’t know how to classify them. Are they Scandinavian? Russian? Wanna-be American? All of the above? And why do all the names have a double “k” and an “a” with a little circle over it. And how do you pronounce the a-with-a-circle?

We follow Taisto Kasurinen (Turo Pajala), a miner from the sticks. When the mine shuts down, Taisto’s father gives him the keys to the Cadillac convertible, tells him to do something better with his life, and promptly retreats to a restaurant bathroom and shoots himself. Taisto drives off to the city (Helsinki, probably) and looks for work that he finds only sometimes. He’s also beaten and robbed along the way.

While looking for work, Taisto’s car is ticketed by the world’s most bored meter maid, Irmeli (Susanna Haavisto). Irmeli evidently works every job known to mankind, since she also cleans hotel rooms and cuts meat at a meat packing plant. Taisto offers her dinner, and she immediately quits her meter maid gig, invites him over, and boom—they’re a couple.

Still looking for work, Taisto encounters one of the men who robbed him, and he beats the man severely. Sadly, he’s immediately arrested and thrown in jail for about two years. It is here that he meets Mikkonen (Matti Pellonpaa, who really should be be-umlauted on those last two letters). Mikkonen is in prison for manslaughter. Taisto and Mikkonen conspire to break out of prison, have Taisto hook up with Irmeli, and then hop a slow freighter to Mexico where they can start their lives over again.

What strikes me as so strange about this film is the passivity of all of the characters. Irmeli, for instance always looks like she would rather be doing anything else than what she is. She looks constantly peeved in one way or another, or at least completely bored with everything going on around her. Taisto almost never shows a hint of emotion. He reacts to seeing the dead body of his father in approximately the same way he reacts to Irmeli asking him up to her apartment. Irmeli’s young son is equally passive, accepting everything that happens around him with about as good of grace as can be mustered for a young child.

Like many a good tale, there is plenty of comedy here, most of it quite dark. Completely down on his luck, Taisto starts picking up discarded cigarette butts since he can’t afford his own pack. Once he finds one long enough to be worth smoking, his lighter stops working.

In a way, this film is not unlike a Finnish Pulp Fiction or Down by Law. Taisto, once in prison, adapts to a life of crime almost instantly, and becomes a vicious, hardened criminal how doesn’t hesitate to shoot someone. I’m certain prison life is bad. I’m also certain that when it goes as bad as it does, that there’s more than a blank, Finnish face looking back blandly at the various guards.

Frankly, I don’t know what to make of this film. It’s a weird little ride. I think, seriously, that I might need more than a couple of hours to digest it.

EDIT: I’ve returned to this because a couple of additional things about this film have struck me. The case the film came in suggests that the film is a “droll, existential crime drama,” but I’m not sure if that’s the most accurate way to depict this film. Perhaps in some worlds, “droll” means people who are willing to commit crimes, begin relationships on whims, and shoot others in the chest without once changing facial expression. That’s not the word I’d pick here, and I find the difference between the events of the film and the reactions to the events of the film off-putting.

Why to watch Ariel: Well, how much Finnish stuff have you seen in your lifetime?
Why not to watch: There may be a reason for this.
Posted by SJHoneywell at 11:54 PM