This One is for Forte 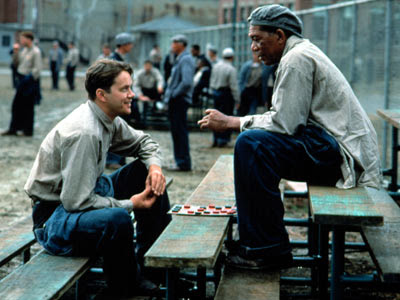 I have a former student named Forte. Should you ever happen to meet Forte, he will not be shy in telling you that his favorite movie of all time is The Shawshank Redemption, or as he calls it, “SHAUW-shangk!” Plunk him down with a big ol’ sandwich, a glass of orange soda, and some chips, and Forte is good for the whole running time.

He’s not alone. I haven’t met a single person who, having watched “SHAUW-shangk!” doesn’t come away loving it. It may not be everyone’s favorite film—it surely isn’t mine—but pretty much everyone who sees it loves it, and loves it a lot. I suppose that people who dislike the politics of Tim Robbins probably hate it, but anyone who dislikes a film because of the external reality of the actor’s life doesn’t have much of an opinion worth caring about anyway.

The film is based on a novella by Stephen King with the odder and longer title “Rita Hayworth and the Shawshank Redemption.” It’s a title that really makes sense only upon knowing the story. We follow a man named Andy Dufresne (Robbins), who is convicted of killing his wife and her lover, although he maintains his innocence. His sentence is two consecutive life terms, one for each body.

In the stir, Defresne makes both friends and enemies. His friends include Ellis “Red” Redding (the great Morgan Freeman), Heywood (William Sadler), and Brooks (James Whitmore). Enemies include the bull queens as well as the guards and the warden. One guard is particularly vicious. Captain Hadley (Clancy Brown) beats a new prisoner to death on Dufresne’s first night in prison, and he has a brutal reputation. Warden Norton (Bob Gunton) professes to be a man of God, but also seems to be prone to several of the deadly sins.

Dufresne’s life changes when he performs a significant favor for Captain Hadley, which gives him a few perks he wants. First, when he is later confronted by the bull queens and nearly beaten to death, Hadley retaliates, and Dufresne is never bothered again. Second, he’s pulled out of the laundry and placed into the prison library for his job. None of that, however, is out of appreciation. Most of it is because it puts him in the position to offer financial advice to the guards and the warden, a job he is good at because of his former life as a banker.

However, he’s too good at what he does. When news comes to light that he might actually be innocent of the crime he is in prison for, the warden prevents any sort of appeal or new trial. The big reason for this is that the warden enacts a plan that looks like it benefits the people of the area by using prisoners for work outside the prison. However, he uses this program to extort money from other businesses, and uses Dufresne’s financial wizardry to launder the money. To do this, Dufresne creates a false persona to funnel the money through.

Ultimately, the film is about the men in the prison attempting to maintain their dignity in a world that has stripped the dignity from them. It can be argued that many of these men deserve to have their dignity taken by virtue of their crimes. And yet they are virtual slaves to their prison masters. Dufresne becomes a virtual slave. He’s given minor perks for performing his job as financial wizard. When he objects to anything or takes a stand on anything, the punishment is severe. It’s not just his dignity that is removed—it’s his humanity, and the humanity of the other men inside Shawshank Prison.

It’s a marvelous script. Morgan Freeman’s voiceover narration drives the film forward by providing a good amount of exposition and much of the emotional thrust of the film, and yet it never feels tacked on or unnecessary.

Even better, it features some of the best work of a number of great actors. Anyone who doesn’t love the work and the catalog of Morgan Freeman is either without taste or has never seen one of his movies. He’s not just a magnificent actor, he’s a magnificent voice actor. Much of the power of this film comes from his voice. It’s also some of the best work from Tim Robbins. I also have a soft spot for Clancy Brown. He almost always plays complete bastards who deserve to be shot in the head, and never better here. A friend of mine worked the front desk at a hotel Brown stayed at, and he said that the man was a real gentleman, which I believe. After all, it’s called acting for a reason, and few people play a better son of a bitch than he does.

The performances here are often subtle, made possible by a story that allows for subtlety. Darabont’s handling of the script is masterful, which is an astonishing feat for a man directing his first major release.

A hell of a film. Before I had seen this, I would have told you that the best prison movies are also war movies. That was before I saw this film for the first time. Shawshank is as good as a prison movie gets—with the possible exception of Cool Hand Luke. I’m not saying Luke is better. I’m just saying Shawshank is just as good.

Why to watch The Shawshank Redemption: A truly uplifting film, a tremendous cast, bad guys worth hating, and a great ending.
Why not to watch: Eventually, it ends.
Posted by SJHoneywell at 11:26 PM