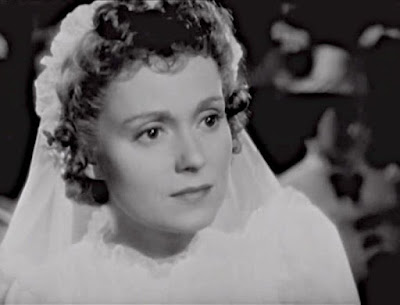 Our Town is based on a stage play, and it manages to do something that many films do not: it doesn’t specifically look like it was based on a stage play. That in and of itself is noteworthy. The movie is based on the Pulitzer Prize-winning play of the same name by Thornton Wilder. I don’t always like stage transfers to screen because they tend to look like someone staged the play and then filmed it. That’s definitely not the case here, and it works very much to the film’s credit.

The drama that takes place happens in the town of Grover’s Corners, NH. We’re introduced to the town by Mr. Morgan (Frank Craven), a local resident (maybe) or perhaps something like a guiding spirit over the town. It’s a little down just over the border from Connecticut and it seems to be pretty much normal in every way. People are born, live, get married, have kids, and die in the town, often never really travelling far from the confines or from the 3000 people or so who live in the immediate area.

Our concerns are going to be with two families specifically, the Gibbs family and the Webb family, who live next door to each other. Mr. Gibbs (Thomas Mitchell) is actually Dr. Gibbs, the local sawbones. Mr. Webb (Guy Kibbee) runs the local newspaper. Both Mrs. Gibbs (Fay Bainter) and Mrs. Webb (Beulah Bondi) are housewives, which makes sense for a movie that takes place before World War I. More specifically than looking at these two families, we’re going to look at one child from each one. George Gibbs (a very young William Holden) and Emily Webb (a nominated Martha Scott) are in high school when our film begins in 1901.

We get a little interaction between the two, and it’s clear that Emily is carrying a bit of a torch for George, who at this point hasn’t really shown any interest in his next door neighbor. Once the first act is done and the characters have been introduced, we doodly-doodly-doop a couple of years into the future and discover that George and Emily are about to get married. George has decided not to go to agricultural college, but instead work on his uncle’s farm with the promise that if he is any good at it, he’ll inherit it. We get a little flashback to see the day when George and Emily decided that they were destined for each other.

This is all well and good if a bit boring. And then we get the third act, which puts the hammer down on the characters and the audience. We jump into the future again, nine years this time. Emily is about to give birth to her and George’s second child, but this delivery is not going well and Emily is on the brink of death. Rather than seeing everyone scurrying around to save Emily’s life, we get instead something like a near-death experience (or perhaps a pre-death experience) for Emily as she encounters people she knew in Grovers Corners who have died. These shadows, including her mother and brother, tell her that because she is dead like them, her job is now to forget the life she once had. Emily relives the morning of her 16th birthday and realizes just how much of the world passed her by without her noticing it.

So, does she come back to life? Does she stay dead? I won’t say, except to say that if you know the play, the ending here is the exact opposite of the stage play, although this was evidently done under the hand of Thornton Wilder himself.

The biggest problem with Our Town is also its greatest strength. The first 70 minutes or so of the movie are pleasant enough, but not really that interesting. This sets us up for the absolute off-the-top-rope elbow smash of the concluding act where Emily realizes that life is meant to be lived and that most of us don’t bother to live it. That seems a little on the nose, perhaps and it would be easy for this to dive head-first into melodrama, but Our Town somehow makes it work. It’s surprising that the third act is as effective as it is, because it seems like this should be a pleasant, dull movie that drops off the cliff into sheer pablum.

Martha Scott’s nomination baffled me until the final act, where she really comes into her own. Her realization of what life is and how most of us treat it is really effective. Honestly, I’m as surprised as anyone could be when the film took this hard left turn into philosophy and metaphysics, because the first two acts certainly didn’t prime me for it.

Our Town is saved by its final act. This would have been a check in a box and a forgettable film were it not for an incredibly strong ending. That elevates it from a pleasant, boring little film into something that is genuinely worth seeing. Toss in that incredible cast--beyond the nominated Scott you have William Holden, Guy Kibbee, Thomas Mitchel, Fay Bainter, and Beulah Bondi, and you've got something definitely worth searching out.

Why to watch Our Town: The third act is pretty amazing.
Why not to watch: The first two acts are very slow, and the ending is changed.