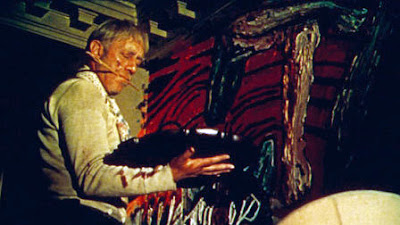 Alec Guinness was one of the great cinematic chameleons. Paul Muni could play just about any role, but so could Guinness, who was equally comfortable in comedy or drama and left an indelible impression on millions of childhoods in science fiction. His performance in The Bridge on the River Kwai is one of the greatest acting performances in cinematic history in my opinion. He plays a role as far from that in The Horse’s Mouth as possible in many ways. He also happened to pen the adapted (and nominated) screenplay.

Gulley Jimson (Guinness) is an eccentric and Bohemian artist who, as the film begins, has just been released from a month’s stint in prison after harassing one of his patrons via telephone. He’s greeted by Nosey (Mike Morgan), a young man with a stutter and the desire to be an artist himself. Gulley is alternately encouraging and cruel to the young boy. In fact, hoping to get away from him, he sends Nosey on an errand and steals the boy’s bike.

Gulley is soon up to his old tricks, making harassing and threatening phone calls to Mr. Hickson (Ernest Thesiger) and attempting to borrow money from his friend Coker (Kay Walsh), a local barmaid. It turns out that despite being completely broke and owing a great deal of money, Gulley Jimson is actually an accomplished artist, and Hickson has a number of his paintings in his possession. They were given to Hickson by Gulley’s ex-wife (Renee Houston) for payment of outstanding debts, but they are worth considerably more than Hickson paid for them. Gulley wants them back, especially because Sir William (Robert Coote) and Lady Beeder (Veronica Turleigh) are interested in buying one of his old works. However, he no longer has any old works, but he soon realizes that ex-wife Sara has hung on to one of them.

All of this is soon put out of his mind when he goes to call on the Beeders. Walking into their house, he sees a wall that inspires him, and, in a long and strange proposal, offers to paint a mural on it and provide the painting in Sara’s possession for 7000 pounds. However, the Beeders are going out of town the next day, which means they aren’t willing to buy without seeing the painting first. Gulley manages to spend the night at the Beeders’ residence by faking a collapse, and the next day wrangles a key to the place. With the Beeders gone for more than a month, Gulley essentially moves in and begins painting on their wall, calling in several people to model for him and having Nosey around to run his errands. His idyll is disturbed by the arrival of a sculptor (Michael Gough), who also takes up residence with an enormous block of stone. Over the course of their stay, the two trash the apartment, including putting a massive hole in the floor when the stone block falls through.

Of course the Beeders return, and of course Gulley is once again on the run. While hiding from the authorities, he learns that Hickson has died and given all of Gulley’s work to the nation, and they are on display in the Tate Gallery. He also discovers an abandoned church set for demolition with a new wall that inspires him to create a new painting.

Gulley Jimson is a distinct and unique cinematic creation. He is, in many ways, a terrible human being, but he is also fascinating in a number of ways. Gulley is a man possessed by a desperate need to create art and simultaneously haunted by the fact that his creations never live up to the vision in his head. Guinness creates a man who is disheveled in almost every way possible except in his artistic vision. He even gives him a guttural croak of a voice that sounds like it’s made of whiskey, cigarettes, and neglect. But it cannot be denied that Gulley Jimson has an artistic passion, style, and talent. When Gulley is on the screen, we look at him, with the exception of when he shares the screen with Kay Walsh’s Coker, who holds her own with him. Kay Walsh went sadly unloved for this film in many respects, and she’s one of the main reasons the film works at all. Mike Morgan’s Nosey doesn’t have a lot to do in the film, but he does have a very convincing stutter. It’s worth noting that the young Morgan was tragically stricken with meningitis and died 10 days before the film finished shooting, and several of his lines were dubbed by a skilled mimic.

Better, some of the humor still works nearly 60 years after the film’s release, which is rare for comedy. Better still, the art is amazing. I’m not an art scholar. Someone who knows art would undoubtedly be able to pinpoint who Gulley Jimson’s work references. All I can say is that it is beautiful and worth seeing.

Gulley Jimson isn’t pleasant, but he is fascinating. That, the art, and the very clever screenplay make this a film that is sadly forgotten and should be known by more people.

Why to watch The Horse’s Mouth: Alec Guinness could do anything.
Why not to watch: It’s hard to warm up to the main character.