Getting Lost in a Part 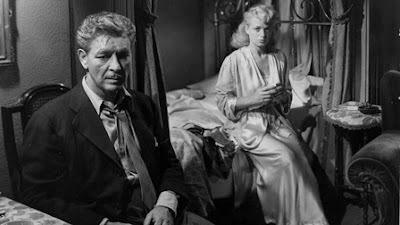 I didn’t know anything about A Double Life going into it. What I discovered soon after starting is that I have a couple of very loose connections to it. First, it’s about an actor, and believe it or not, I did a little acting in college (a very little, mind you). Second, it concerns a stage performance of Othello. I have a degree in English literature, so I tend to sit up and take notice when we’ve got Shakespeare on tap. Even better, A Double Life is all about the crazy. Let me tell you from experience, a film about an actor also being about severe mental illness is not a stretch.

Anthony John (Ronald Colman) is an acclaimed stage actor who, as often seems to be the case with artists in general, isn’t satisfied with his life or his career. He has proposed to several people a stage production of Othello with him taking the title role. He’d like to put actress Brita (pronounced like Rita with a b and not the water filter) Kaurin (Signe Hasso) in the role of Desdemona. Brita is his ex-wife; the two are still very much in love with each other but can’t seem to live with each other. This is because Anthony tends to very much live the roles he takes. When he plays in comedies, life is good. When he plays in heavier fare, he becomes moody and difficult. Othello, then, bodes ill.

As he contemplates wanting to play Othello, Anthony goes for a walk and ends up in an Italian restaurant. It is here that he meets waitress and model wannabee Pat Kroll (Shelley Winters). She’s looking to make useful connections, and Anthony John, despite their age difference, seems like the kind of guy she needs to meet. Despite his relationship with Brita, soon Anthony and the much lower-class and gauche Pat are embroiled in an affair. He decides to go forward with Othello, and thus things begin to turn.

It’s important to know a little bit about Othello going into this, or a lot of A Double Life won’t make sense. In the play, Othello and Desdemona fall in love with each other, but one of Othello’s lieutenants has an axe to grind. He convinces Othello that his wife has been unfaithful to him with another of his lieutenants. In a jealous rage, Othello strangles his wife, only to discover that she had been faithful to him all along.

Since Anthony tends to live his roles, he becomes consumed with jealousy. Fittingly, Brita is starting to receive attention from another man. Where this is going should not be a huge surprise, but it doesn’t go specifically where you may expect. What happens, though, should appear under a spoiler tag.

Knowing that Brita is needed for the continuing success of the play, Anthony’s eyes turn elsewhere. Specifically, they turn to poor Pat Kroll, who happens to be a ready victim for Anthony’s murderous rage.

It wasn’t until watching this that I realized just how often Shelley Winters doesn’t make it to the end of her films, particularly her most acclaimed films and roles. Winters dies in this, of course, and she also dies in Lolita, The Night of the Hunter, The Diary of Anne Frank, A Place in the Sun, and The Poseidon Adventure. Sean Bean, eat your damn heart out!

While the supporting cast in A Double Life is good, it’s really all about Ronald Colman, who is better in this than he was in anything else I’ve seen. I like Colman well enough, although he’d never make my list of actors I look for from films of this era, but if all of his roles had been like this one, he’d rank a lot higher. Colman is greatly assisted by a tremendously good screenplay. It’s common for a film to pick the bones of Shakespeare, most often by cribbing one of his plots directly. A Double Life manages to go one better; it certainly uses Othello in a variety of ways, it also folds things from the play into the actual drama happening on the screen.

Where A Double Life goes a bit off the rails is in the third act. Once we get to where Anthony is taking us, it’s simply a matter of getting to the inevitable conclusion. This was made during the Hays Code days, so we know that, like all classic tragedies, there has to be a specific conclusion. It takes us half an hour to get to what we essentially know is coming, though. That it does this by mimicking noir is interesting, but also tonally strange.

Still, it’s worth it for Colman, and it’s always interesting to see Shelley Winters as a young, brash actress.

Why to watch A Double Life: A great story made flesh with a great performance.
Why not to watch: It shouldn’t be this hard to find this film.