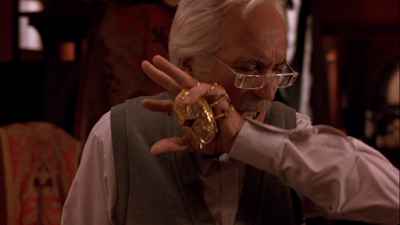 The school I work for has an extensive online library that recently has included a film library. If only this had shown up a few years ago! Still, better late than never, right? There’s plenty of interesting films in the Kanopy library, including Guillermo del Toro’s first film, Cronos. This is an auspicious debut. While it’s unpolished in certain ways, it also shows a lot of the themes that del Toro will hit on for pretty much his entire career. One of his main themes is that for del Toro, the worst monsters are always human. Sure, there are monsters in his films, but many of them are just doing what they are more or less programmed to do. While they can be terrible and frightening, they are no more evil than a shark or a hungry lion. People are always capable of the greatest good and the worst evil.

Cronos is something like a vampire story. It’s very different from the traditional vampire tale, though. This isn’t a grand Gothic romance. In fact, it’s far closer to a tragedy, where the people we are going to be following are caught up in events that they have no control over, and that will change them terribly through no fault of their own. We start with a little bit of voice over that tells us of a 16th-century alchemist who wanted to extend his life. He created a device he labelled the Cronos device. He disappears, only to be discovered in 1937 in the collapse of an old building, his heart pierced by a piece of the debris.

Flash forward to the film’s present when antique dealer Jesus Gris (Federico Luppi) takes possession of a number of that alchemist’s possessions. One of the items, a statue of an archangel, is hollow. Inside is a clockwork scarab, the Cronos device of the beginning of the film. Not really knowing what it is, Gris winds it up. It more or less comes alive in his hand and injects him with something. He and his granddaughter Aurora (Tamara Shanath) hide the source of the injury from Jesus’s wife (Margarita Isabel).

Jesus soon discovers that he both appears and feels younger. He shaves off his mustache and looks a decade or more younger. His sex drive starts to return as well. Disturbingly, he also starts to have a craving for blood. He’s naturally repulsed by this initially, but soon is unable to resist the temptation. Meanwhile an ailing businessman named de la Guardia (Claudio Brook) has been looking for the Cronos device for decades, sending his nephew Angel (Ron Perlman) out to purchase any ancient archangel statues he hears about. Naturally, he hears about the one that has fallen into Jesus’s possession, and he buys it, but the Cronos device is gone.

The connections to vampire lore are there, but are tangential. There’s a very disturbing scene at a party where Jesus finally gives in to his desire for blood by licking it off a bathroom floor, but other than a scene near the end, there’s not a great deal of blood drinking. Jesus becomes sensitive to sunlight and is forced to sleep in a large box, another connection, but there’s no requirement that he sleep in grave dirt or even a coffin. There’s a clear sense that del Toro wants to connect to the traditional vampire lore, but also wants to take it in a new direction.

There is also some clear symbolism going on here. The most interesting is the name of our protagonist. First of all, “Jesus Gris” sounds very much like Jesus Christ. More telling, “gris” is Spanish for grey. Jesus is a decent man, a man who seems to be good and moral who is suddenly thrown into a situation that is morally, well, grey. This becomes clear when young Aurora is bleeding at one point and his desire for blood has kicked in completely.

Ron Perlman is at his best in Cronos, and his casting is absolutely genius. Perlman is capable of playing a great blue collar hero, as in Hellboy, but he’s much better and often more interesting as a villain. He’s a pure villain in Cronos and he’s entertainingly evil in so many ways. He also speaks about half of his dialogue in Spanish with a decidedly American accent, and that works, too. He’s supposed to be an American thug in Mexico, and he clearly is.

If there are any issues with Cronos it’s that it’s Guillermo del Toro’s first film. It’s unpolished in a lot of ways, and a lot of the concepts are here but are not fully realized. It shows a great deal of promise that would eventually be revealed in The Devil’s Backbone, Hellboy, Pan’s Labyrinth, and more. This shows the promise, but it only shows the promise and doesn’t fully demonstrate the reality that del Toro’s imagination is capable of.

Why to watch Cronos: Guillermo del Toro makes a huge impact in his first film.
Why not to watch: It’s unpolished.