Films: Skippy
Format: Video from The Magic Flashdrive on laptop. 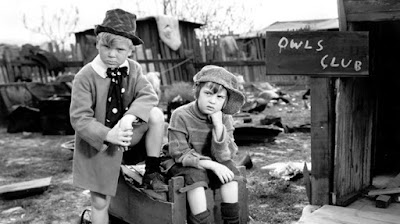 A few years ago when I was starting to get into the short strokes on the 1001 Movies list, Chip Lary made me an offer I couldn’t refuse. Send him a flashdrive, he said, and he’d fill it with movies that I couldn’t otherwise find. There’s no way I would have finished the full list without Chip’s assistance in finding those movies for me. Chip also included a few rarities and some hard-to-find Oscar movies. With my viewing of Skippy today, I’ve watched everything that Chip sent me for this blog. It’s a little sad, the end of an era.

I wasn’t sure what to expect when diving head-first into Skippy. Old movies, especially those from those first few years of sound, can be rough. When kids are the main characters, that problem can be compounded. Kids frequently can’t act, and back then, directors hadn’t really figured out how to get kids to act. Things are pretty amateurish much of the time. Since Skippy not only features kids but is focused on them as the main characters, that can mean some rough going.

It’s worth noting that Skippy is unique in a few ways in terms of its Oscar history. Despite coming from just the fourth Oscars ceremony, it still holds a few noteworthy achievements. Jackie Cooper is still the youngest person ever nominated for Best Actor; he was nine at the time. Until this most recent year, Norman Taurog was the youngest winner of Best Director at 32. It remains the only movie based on a comic book, comic strip, or graphic novel to be nominated for Best Picture.

Our main character, Skippy Skinner (Jackie Cooper) is the unruly child of Dr. and Mrs. Skinner (Willard Robertson and Enid Bennett). Despite their personal wealth, Skippy prefers to hang out on the wrong side of the tracks with poorer kids. He does this despite repeated warnings from his father about germs, disease, and all of the problems that can be found there. On the day the film begins, Skippy meets Sooky (Robert Coogan), a kid a couple of years younger than he is. Sooky lives in the local shantytown and is currently stealing some wood. Skippy, offended that such a crime should go unchallenged, demands that Sooky fight someone for the right to take the wood. Skippy eventually steps in to save the young boy from a beating from a bully named Harley Nubbins (Donald Haines), and the two become immediate friends.

It would seem at first blush that the story here is going to be Skippy getting into trouble with his father and getting out of it by virtue of his naïve and believing mother, but that’s not the case. What happens instead is a lot darker. Harley borrows Skippy’s yo-yo and breaks his father’s windshield with it, and then blames the crime on Skippy and Sooky. The same day, Mr. Nubbins (Jack Rube Clifford), the local dog catcher, catches Sooky’s dog, Penny. Since it costs $3 for a license and Sooky’s family is dirt poor, the dog is considered a stray. Skippy breaks into his piggy bank for the money to spring the dog, but Nubbins takes that money to pay for his windshield and demands that the boys cough up another $3 to spring the pooch.

This, then, is what we’re going to spend time with. Much of the movie is spent watching the two boys figure out ways to raise the money to get Sooky’s dog back. Throughout all of this, Skippy sometimes appeals to his parents for money, but refuses to tell them why. The main reason is that he’s not allowed to be in the shantytown, and he knows that as soon as it is revealed that he wants the money for a friend who lives there, he’s going to get in a mountain of trouble.

It’s worth noting that the end of the second act is pretty brutal, especially for its time. The third act redeems this in some measure, and attempts to redeem the relationship between Skippy and his father. I’m not sure it’s entirely successful, but I like that it made an attempt.

It’s a bit surprising that this garnered the nominations it did. It’s a nice bit of family entertainment for the most part, although I think that second act might have traumatized more than its share of children. It’s very interesting to me that a movie like this, almost certainly designed more for children than for adults, was made in the sin-filled pre-Code days. But Best Picture?

The Best Actor nomination for Jackie Cooper (a feat he never repeated over the next 80 years) is almost a little more understandable. Cooper is actually pretty good as Skippy, and doesn’t overact much at all. The same can’t be said of Robert Coogan or the other kids who show up throughout the film. I’m not sure I’d nominate him, but the performance is a very good one.

Ultimately, though, I’m not really sure what to think about Skippy. There is a plot here, but the film is almost entirely episodic in how it works. The kids attempt to raise money, and we get little set pieces that sometimes work and sometimes don’t. I think we’re supposed to find young Skippy to be a lovable rogue. In truth, he’s not that much of a rogue. It’s much more that his father is overbearing and that Skippy is a pretty normal kid. It’s worth noting that we’re going to witness a good amount of bad parenting here, something for which the film does not apologize. In fact, I’m not sure the film even knows it. If you know the legend of how Norman Taurog got Jackie Cooper to cry, you’ll almost certainly agree.

Why to watch Skippy: It’s darker than you might expect, and also a little sweeter.
Why not to watch: For all its Oscar nominations, the kids just can’t act.