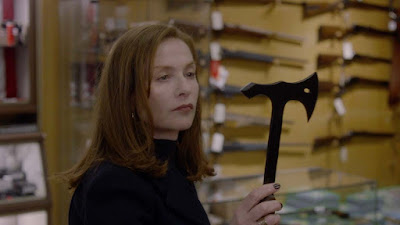 I have to wonder what is in the water. In Elle, Isabelle Huppert believably plays a woman in her mid-40s. She’s actually in her mid-60s. When I discovered this, the first thing I did was wonder about the woman who plays her mother. It’s one of those fun little Hollywood games—finding places where a pair playing parent and child are actually very close in age. That’s not the case here. Judith Magre was 90 when Elle was made, and she can easily pass for early/mid-70s. I started to wonder if everyone in the film was actually 20 years older than his or her role.

Before I get into the actual film, I feel like this is more I need to say about Isabelle Huppert. She is just about unique in the list of actresses I have seen in multiple movies. I think she is always worth watching, at least in the films I have seen her in, and never like the characters she plays. I love her in this, in Amour, The Piano Teacher, Story of Women, and I dislike each of those characters. In I Heart Huckabees, she’s perhaps the closest to being something like likable, except that may just be in comparison with everyone else, since just about everyone in that film is terrible as a person. And yet I like Isabelle Huppert every time I see her.

Elle is an unpleasant movie. There’s no real way around that statement. We open with Michele Leblanc (Huppert) being attacked in her home and raped by a ski mask-wearing assailant. She cleans up the broken things on her floor and goes about her normal routine, including a trip to a local doctor to check for a variety of STDs. She also has the locks on her doors changed.

Being assaulted has certainly registered with Michele, who starts taking more precaution with the various men in her life. As the co-owner/president of a video game company, most of her employees are male, and most of them seem to dislike her, meaning that there are a number of possible suspects in her attack. Michele has a contentious relationship with her son Vincent (Jonas Bloquet), in part because of his connection to the pregnant Josie (Alice Isaaz), who is demanding, petulant, and quite possibly unfaithful, and perhaps even carrying someone else’s child. Michele has an equally contentious relationship with her mother (Judith Magre), and her ex-husband Richard (Charles Berling).

To make matters more interesting, Michele is having an affair with Robert (Christian Berkel), who is married to her business partner/co-president Anna (Anne Consigny). Michele also maintains a flirtatious relationship with Patrick (Laurent Lafitte), a neighbor. Any of the men in her life could be her assailant (leaving out Vincent. Elle is morally charcoal grey, but not that much). Rather than telling the police, Michele starts to put pieces together herself to figure out precisely what has happened and why. As she does, we learn bits and pieces of her past, including the fact that her father was a mass murderer and that she was implicated in the killings, or at least the cover-ups that followed, escaping serious consequences because she was 10 at the time.

As I said above, Elle is a very dark film, one that takes very twisted turns into some psychologically ugly places. We revisit the assault several times during the course of the film, sometimes with Michele changing the end result—fighting back more effectively. That seems psychologically healthy. What doesn’t is what happens after Michele discovers the identity of her assailant. I’m not going to reveal what happens, but it’s one of those things that can be seen as either the height of feminist thought or something that makes the woman the most obvious and terrible victim possible. It could go either way here, and I don’t know which side has the right of it.

Isabelle Huppert is naturally the reason to see this. As always, she is transcendent as an actress despite playing a character who is unpleasant and the sort of person one wouldn’t want to know. Early on in the film, a woman dumps a tray of food on her in a restaurant. We don’t know her past at this point, but it’s eventually obvious that the reason for the food dumping was Michele’s connection to her father’s killings. It seems unfair in that moment, but by the end of the film, it’s a little more understandable. It’s still unpleasant, of course, but that doesn’t mean it wasn’t at least a little warranted.

That makes Elle hard to judge. Is it possible to genuinely like a movie when one dislikes the character who stands at the film’s center? It is, but it’s a rare film that can do it, and a rare performance that can make it work. If anyone can for me, that person is Isabelle Huppert, who is truly wonderful in just about everything I’ve seen her in. I’m very pleased that she finally got an Oscar nomination. I thought she should have gotten one for Amour as well, so it’s nice to see the Academy catching up a little.

The biggest shock is that this is a Paul Verhoeven film. It feels like a return to his roots and films like The Fourth Man and Soldier of Orange. I think that’s a good thing, since I find his big-budget films to be hit-or-miss at best.

Elle is worth your time. Seeing it once is enough. Seeing it twice is probably one and a half times too many.

Why to watch Elle: Isabelle Huppert is unique in that she is always compelling to watch and never plays anyone you’d want to know.
Why not to watch: It’s unpleasant in ways that are difficult to watch.