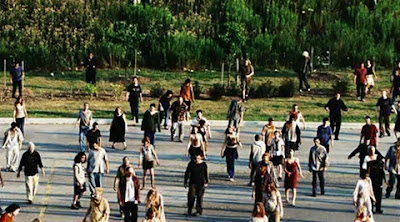 I’m generally a little leery of remakes. Sure, there are some that are good and a rare few that transcend the original version, but most of the time, they fall short. This seems to be especially true of horror movies on both ends of that spectrum. They tend to be either great (The Thing, The Fly) or horrible (The Wicker Man and a couple hundred more). So it was probably natural that I went into the 2004 remake of Dawn of the Dead with some trepidation. Toss in the fact that it was the directorial debut of costume fetishist Zack Snyder, and I was concerned.

The Dawn of the Dead remake is pretty short on plot. Essentially, the zombie holocaust happens and a group of people find themselves locked inside a shopping mall that they barricade to keep out the living dead. More people show up, people die of bites and come back and are killed again. Eventually, the people inside the mall decide that they need to get out and since one of them has access to a boat, they decide to go out into Lake Michigan to a more or less deserted island. There’s a breakout attempt in fortified shuttle busses through thousands of zombies. It’s all about the spectacle here as well as a couple of signature horror moments.

Is it sacrilege to say that there are some moments that improve on the original? The first ten minutes here are just about textbook of how to open a horror movie. Nurse Ana (Sarah Polley) comes home from a long shift and falls asleep with her husband. When she wakes up, she and her husband are attacked by a neighbor girl, who manages to bite Ana’s husband on the neck, eventually causing him to bleed out. He naturally wakes back up, forcing Ana out of the house through the bathroom window. She drives away in a panic and is eventually run off the road into a tree. It’s non-stop, the sort of slow start to warp speed that was the best part of 28 Weeks Later.

But this opening also holds within it one of the major problems of Dawn of the Dead. The original movie had the benefit of being a direct sequel to Romero’s first movie. This does not really have a precursor movie in that respect. It’s a remake in the sense that it uses Romero’s idea of undead flesh-eating ghouls and takes place mainly inside a shopping mall, but that’s about it. Instead of being a part of a series, it more or less stands on its own. The opening few minutes, where we go 0-to-1000 works in the moment, but it certainly seems like the zombie plague hits and goes out of control pretty quickly. Ana comes home in a normal world and wakes up with thousands of walking dead in the area. It seems a bit quick, and it’s never really explained.

Another issue is that there are simply too many characters here. In the original version, we have a group of four people trapped inside the mall as our main characters. Everyone else is either a zombie or a member of the invading biker gang, at least after the first half hour. In this remake, we start with a larger group—Ana, Kenneth (Ving Rhames), Michael (Jake Weber), Andre (Mekhi Phifer), and Andre’s pregnant wife Luda (Inna Korobkina). Once in the mall we add three security guards: CJ (Michael Kelly), Terry (Kevin Zegers), and Bart (Michael Barry). A truck with more survivors shows up, giving us Nicole (Lindy Booth), Steve (Ty Burrell), Norma (Jayne Eastwood), Tucker (Boyd Banks), Glen (R.D. Reid), Monica (Kim Poirier), and Frank (Matt Frewer). And then there’s Andy (Bruce Bohne) across the street on the top of his gun store. Consequently, these people simply become fodder. We know nothing about them. Ana is a nurse and lost her husband. Ken is a cop. Steve is a rich asshole. Monica is slutty. None of these people have any substance, and so it’s difficult to care about any of them. That’s a problem in horror. Gross outs always work, but real horror needs to have connection to be effective.

And then there’s the personal problem I have with the film. It has fast zombies. I object to fast zombies for a personal reason. Slow zombies work for me because it allows for the building of tension. One slow zombie is comic. Four or five of them are threatening. A horde is terrifying. With fast zombies, there’s always threat, but the build up to larger and larger crowds of them is therefore less of a build. I get why a filmmaker might like them, but I think it’s an innovation the genre didn’t need here (and I say this realizing my slight hypocrisy at not having an issue with the zombie-like infected in 28 Days Later).

That lack of build happens through the whole movie. We’re at the mall with the characters inside within the first 15-20 minutes. They just show up there, not because it’s a destination or easily defended or because it would have food and supplies. It’s just where they happen to show up. When the zombies show up there, the commentary is kind of the same as from the original, but far less is done with it. It’s less a comment on consumerist society than it is a nod to Romero’s comment on consumerist society.

All of this said, I actually liked this, kind of in spite of itself. There are some good moments here and some quality horror. It’s not the original; not many things are, but it’s solid and well made, even with Zack Snyder at the helm.

Why to watch Dawn of the Dead: A satisfying update of the original.
Why not to watch: Fast zombies somehow don’t seem right.

Posted by SJHoneywell at 2:55 PM

Email ThisBlogThis!Share to TwitterShare to FacebookShare to Pinterest
Labels: Dawn of the Dead, horror, Zack Snyder