Born on the Bayou 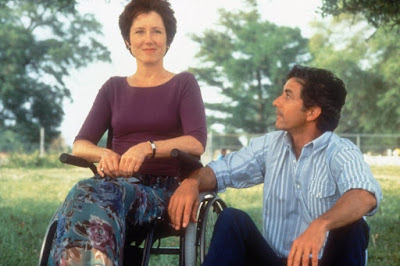 There are plenty of movies on my Oscars lists that I watch specifically because they are on the lists. I wouldn’t normally watch something like Passion Fish, which screams “women’s movie” from the cover to the cast to the description. The cast is good, though. I like Mary McDonnell well enough, and I love Alfre Woodard, Vondie Curtis-Hall, and David Strathairn. I went into this with some reservations, but also with the hope that I’d like it.

Passion Fish starts with an inciting incident that we don’t see. Soap opera actress May-Alice Culhane is struck by a car while getting out of a taxi and is paralyzed. After gritter her way through some physical therapy and with nowhere else to go, she returns to her family home in bayou country in Louisiana. Angry and bitter, May-Alice begins drinking heavily and entertaining herself more or less by driving away all of her nurses.

All of this changes with the arrival of Chantelle (Alfre Woodard), a nurse who desperately needs both a job and a place to live, although she isn’t clear on why. There’s friction between the two women initially, with May-Alice doing everything she can to push Chantelle away and Chantelle pushing back but firm in her commitment to keeping her employment. May-Alice’s wayward, gay uncle Reeves (Leo Burmester) pays a visit and gives May-Alice his old camera and the contents of the darkroom he had built in the house years before. May-Alice is also paid a visit by two sisters, Precious (Mary Portser) and Ti-Marie (Nora Dunn), who used to torment her when she was younger and before she moved away from Louisiana.

Things change again for both characters when each of them gains something like a love interest. For May-Alice, this is Rennie (David Strathairn), a man who she had a crush on as a girl. Rennie is now married with five kids, but there are hints that his marriage isn’t all that happy. His wife seems oppressive and protective, never letting him do much of anything that he likes. For Chantelle, this comes in the form of the awesomely named Ulysses “Sugar” LeDoux (Vondie Curtis-Hall), thrice-married with six or seven kids. Neither of them is really ready for anything like a relationship, and in May-Alice’s case, sex is essentially off the table, anyway.

Slowly, we learn a bit more about the women. May-Alice is paid a visit by some of her former soap opera actors. Chantelle’s visit is more serious, her ex Luther (Tom Wright) shows up to check on her progress, and it is revealed to May-Alice that her caretaker went through drug rehab for cocaine addiction. It is further revealed eventually that she has a daughter named Denita (Shauntisa Willis) of whom she lost custody. Things finally come to a head when May-Alice’s old producer shows up with a way to write her back onto the show.

There’s no question that Passion Fish is slow, almost painfully so. It is, however, properly paced for the story that it tells. At 135 minutes, it’s probably about 15-20 minutes too long, but even so, it doesn’t really overstay its welcome. Everything that happens in it feels natural and real. The characters are believable and act in real ways. We’re spending time in the company of these people who, over the course of the film, become people we like spending time with. The angry and abusive May-Alice eventually softens into someone interesting while Chantelle opens up into someone who has worked desperately to overcome her past.

So let’s talk performances here, because there are a lot of good ones. Mary McDonnell, who I’ve always thought of as serviceable, with an air of being above the acting profession, gives the performance of her life here. May-Alice is foul-mouthed and mean at the start of the film, but this is not what makes the performance so compelling. It’s the physicality of it. McDonnell really looks and acts like someone who is stuck in a wheelchair, and she does a great deal of work to make her physical limitations look like the real thing. It’s damn fine work. As for Alfre Woodard, I’m not sure how she was passed over for a nomination. I love Joan Plowright, but there’s no cause for nominating her in Enchanted April over the wonderful work put in by Woodard on this film. Both Strathairn and Curtis-Hall are great in smaller roles. Both are likable (especially Curtis-Hall), and are absolutely worth watching here.

I was surprised by Passion Fish. As I said above, I didn’t expect a great deal from it, thinking it would be a drippy slog that ended with a relieved check in a box. It’s not that. This is a slow and mesmerizing film, one that lays quietly and unfolds without the need to check how much time is left in the running. It’s the sort of film that plays out and is suddenly done before you realize you’ve entered the third act. Much of this comes from the relationship built between the two women. Some comes from the scenery in which the film is shot. It’s a good and worthy screenplay, with dialogue that feels as real as the characters and the relationships.

It’s also worth noting that Passion Fish has a great soundtrack, with plenty of solid, real zydeco. Hard to sit still when that stuff is being played by people who know how to play it.

Why to watch Passion Fish: Mary McDonnell and Alfre Woodard are just about perfect.
Why not to watch: It’s slow, and that will be a problem for some.