Not Another Holocaust Movie

Film: The Man in the Glass Booth
Format: Streaming video from Kanopy on laptop. 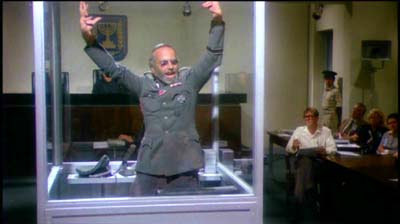 I’ve said, ever since watching Son of Saul that it’s getting harder and harder to work me up over a story that concerns the Holocaust. There are, of course, millions of stories to tell about the Holocaust, but there are only so many one can take in one lifetime. Having seen Shoah and Night and Fog, it feels like I’ve hit my limit for how much inhumanity and true horror I can handle. The Man in the Glass Booth managed to do something I thought might be impossible. It presented a completely new Holocaust story.

We are presented with Arthur Goldman (Maximillian Schell), a wealthy Jewish industrialist living in New York. Goldman is highly eccentric and extremely paranoid, particularly about a blue Mercedes that he sees outside of his apartment again and again. He gives very strange commands to his servant Jack (Henry Brown) and his assistant Charlie (Lawrence Pressman). He is also surprisingly anti-Semitic. He is prone to saying completely outrageous things and shocking everyone around him.

As his paranoia grows, he makes increasingly strange demands of Charlie, telling him to wire money to specific places and make particular demands of people of whom Charlie has never heard. And suddenly, everything seems to make sense. Jack is sent to drive around in Goldman’s car to see if the Mercedes follows. When it does, he’s told to park it and go off to the movies. Charlie is sent down to escort the men from the car up to the apartment. It is then that we discover that Arthur Goldman is not who he has claimed to be. The men are Israeli secret agents who have discovered that Goldman is actually a Nazi in hiding, having adopted Goldman’s identity at the end of the war and emigrated to the U.S. illegally. He is kidnapped and extradited to Israel to stand trial.

Once in Israel, Goldman’s persona and demeanor exhibit a slight change. He is just as audacious as he always was, but now appears to be proud of his past and his actions. Knowing that his kidnapping could cause an international incident, he offers a deal to his captors. He will agree that his American citizenship is fraudulent if he will be allowed to represent himself on trial, to wear his old uniform, and to be allowed to speak during the trial whenever he wants.

What follows is one of the most brutal and awful commentaries on the Holocaust that I have seen. Goldman discusses his actions openly and passionately, speaking with pride about the people he killed and how he killed them. He also fully and completely explains why the German people found Hitler so compelling. More, he explains precisely why people were so willing to kill for him and on his command.

The Man in the Glass Booth is a film of two halves rather than three acts, with a coda that changes the entire film. I won’t go into this because it’s the kind of thing that needs to be seen and experienced rather than spoiled on an internet blog. Suffice to say that nothing in the film is what it seems at any time. The ending is problematic in the sense that we really know nothing when the final credits roll. We’ve only got what has happened on the screen, and we’re left not really knowing what has happened on the screen.

There are a few things worth noting about The Man in the Glass Booth. The first is that it was highly controversial in its casting. Maximillian Schell was a native Austrian. It struck a lot of people as wrong that someone who essentially grew up under the reign of Hitler would play a Nazi character masquerading as a Jew. Nonetheless, Schell gives a scenery-chewing performance that, despite the extremes to which it goes, is truly towering. I like Schell in general. Aside from Oskar Werner, he may well be the greatest German film actor in history, and it would not seem out of place to call this his greatest performance. He is absolutely magnetic. He is constantly on screen, and while he is frequently surrounded by many other people, he may as well be performing a one-man show.

Another interesting point is that this is based on a play—this is clearly evident through most of it. That play was written by Robert Shaw, based on a book also written by Shaw. The stage version was heavily influenced by Harold Pinter. I’ve only known Shaw as an actor, and a damn fine one. Who knew that Shaw was capable of such dark majesty in storytelling?

The Man in the Glass Booth is not an easy film to recommend because of the pure evil that accompanies it on the screen. This is a character study of brutality and madness, or perhaps brutality disguising itself as madness. It is not an easy watch, even in the beginning. It is, however, a staggering film, and one worth seeing for those who have the emotional stamina to make it all the way through.

Why to watch The Man in the Glass Booth: This is not a Holocaust story that you have seen.
Why not to watch: No answers, no resolution.

Email ThisBlogThis!Share to TwitterShare to FacebookShare to Pinterest
Labels: Arthur Hiller, Best Actor, drama, The Man in the Glass Booth