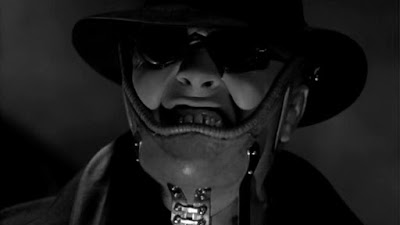 In a sense, Peter Lorre is proof that there is a bias in Hollywood. Lorre looks like what you would get if you could turn a pug into a human being. If a woman looked like Peter Lorre, she’d never have a chance at a serious career in Hollywood. Lorre, though, had a fantastic career and even was placed in roles where he played characters with romantic intentions. Of course, in most cases like that, Lorre played a character like he did in Mad Love, where he is completely insane and his love is not merely unrequited but shunned completely.

For a film that runs a mere 68 minutes, Mad Love has a great deal going on. I’ll go through this quickly so try to keep up. Doctor Gogol (Peter Lorre) is a doctor specializing in transplantations and other similar surgeries. He happens to be the greatest such surgeon in the world and works to restore the limbs of children and save the lives of the people of Paris. He’s also obsessed with an actress named Yvonne Orlac (Frances Drake), who performs nightly in a sort of Grand Guignol drama in which she is tortured. Gogol is madly in love with Yvonne and is unaware that she is already married to a man named Stephen Orlac (Colin Clive), a concert pianist.

Gogol discovers this when he goes backstage to beg for Yvonne’s affections and is naturally rebuffed. As it happens, the show is closing and Yvonne is leaving the country with her husband. Gogol decides to purchase the wax sculpture of Yvonne that graces the studio—a small glimpse into the madness to come.

While all of this is happening, Stephen Orlac finishes a concert and hops on a train to return to Paris. Also riding the train is a man named Rollo (Edward Brophy), a former knife-thrower convicted of murder on his way to the guillotine. Naturally the train crashes and Stephen has his delicate pianist hands crushed. Despite her distaste for the man, Yvonne begs Doctor Gogol to rescue her husband’s hands. Since the hands need to be amputated, Gogol decides to graft the hands of the executed Rollo onto Stephen’s limbs.

Got all of that? Here’s where it gets fun. Mad Love works solely under the proposition that body parts retain the properties of the person who possessed them. This means that with Rollo’s hands, Stephen can no longer play the piano, but he is suddenly very good at throwing knives and his hands seem to want nothing more than to throw knives at people. Meanwhile, Gogol goes more and more insane and tries to come up with a plan to steal Yvonne for himself. It all spirals out of control for everyone. Eventually, Stephen’s father is murdered and he discovers that he has Rollo’s hands thanks to Dr. Gogol pretending to be a resurrected Rollo with his head reattached.

That right there is really the main reason to see Mad Love. It is essentially a remake of the silent horror film The Hands of Orlac, but this one has all of the lovely trimmings of sound. It is a completely insane plot, the sort of thing that requires the audience to buy into a couple of ridiculous ideas and then goes from there. If you’re willing to accept the idea of hand transplantations and are equally willing to believe that the transplanted hands would then have a mind of their own, you’re ready to buy into the film. That it packs all of this crazy into a mere 68 minutes is just an additional bonus.

The real joy, of course, is the over-the-top performance of Peter Lorre, who evidently shaved his head for this role. As bizarre looking as he normally was, he’s absolutely terrifying with no hair, and his descent into madness is quick and complete, and yet kind of believable. There are plenty of classic horror movie tropes here—he talks to the wax statue of Yvonne and “entertains” it by (naturally) playing the organ. It seems that even in a movie allegedly set in the year of the film’s present, the best way to discern if someone is a madman is to have him play the organ. No psychopath ever plays the saxophone or the bassoon.

This is also the point where I typically complain that a film like this one simply doesn’t go on for long enough and that finding a way to add in some additional story or drama would help it. That’s really not the case with Mad Love, which doesn’t come close to overstaying its welcome at its spare 68 minutes. It’s so packed with ideas, in fact, that the film moves along at a very brisk pace, never slows down, and still manages to play out most of its ideas fully by the time the curtain drops at the end. Adding more would just clutter it up.

Really, if there is a problem here it’s that the buy-in is just too high. In addition to the crazy coincidences, we have to believe that a doctor in the 1930s could reattach hands and that those hands would somehow retain the desires and intents of their former owner. If you can accept those premises for a little more than an hour, though, there’s nothing to stop you from enjoying Mad Love.

Is it great? No, it’s not. But it is a hell of a lot of fun and it’s entertaining, and really that’s all that is needed from a quick little scare film like Mad Love.

Why to watch Mad Love: Peter Lorre at his most insane.
Why not to watch: It’s pretty goofy.