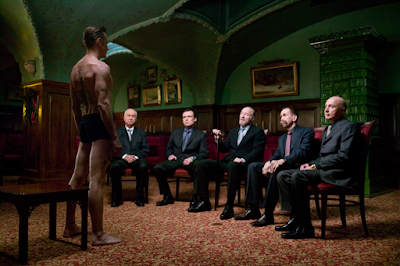 As is often the case with any of these awards, we’ve got a nice collecdtion going in, but there’s definitely some room to make things more competitive. Let’s get rid of the “not really Oscar films” screenplays first. It’s a rare family film that makes a screenplay nomination, and with Ratatouille already here, Enchanted didn’t stand much of a chance. It’s a clever film, though, and far more entertaining than it should be. Comedies also get short shrift at the Oscars, which leaves out Knocked Up (which I agree shouldn’t be nominated, but I think it might get support from some), and the original Death at a Funeral, which I think is beautifully written. It also leaves out Hot Fuzz, which I think is one of the best movies of 2007 in general, and which clearly has one of the tightest and most competent screenplays around. But again, not really Oscar material. Science fiction is often overlooked as well, but the spare and simple The Man from Earth depends entirely on its screenplay to work, and work it does. For real contenders, I think we’re left with two snubs: La Vie en Rose and Eastern Promises. Of these, I’d pick the latter.

5. Michael Clayton is a movie that I thought was good but not great. It’s also a movie that trades on its performances and the star power of George Clooney more than it does anything else. I don’t really remember the story that clearly, and it hasn’t been that long since I’ve seen it. I remember some aspects of it, but I’d need to go back and really read through my review to remember those details. That doesn’t speak well for the screenplay, and it certainly isn’t the sort of trait that makes me want to give this movie an Oscar. .

4. Juno trades on a lot of different things, but it’s major selling point is the very witty, reference-filled screenplay. I would imagine that this is why it won this award. While the screenplay is the strongest point of Juno, I think it’s also the film’s biggest problem. It’s too much. The film wants to present us with a precocious, smart, 16-year-old girl who has gotten herself into some trouble. What we get instead is almost a caricature of this sort of character. Juno as a character is too smart and too self-aware to be anything other than a character in a film that wants to be a lot smarter than it turned out to be. I get why it won, but I’m not sure I’d even want it nominated.

3. I think I can make a legitimate case for each of the three remaining films, and I think they could go in any order. I’m putting Ratatouille in third not for any faults in the film, but because there are aspects of the other two I like better. This is a wonderfully well-written film in general, whether a family film or not. Much of what makes it work, though, are the characterizations from the voice actors and the artwork. Still, there is a beautiful moment at the end of the film that is one of my favorite animated film moments ever.

2. I found The Savages to be oddly flat emotionally, but still completely draining. What I like about it more than anything else is that it feels like a story about real people. It would be easy for this to become farce or slapstick, but it never does. The problems that happen are real ones, and while there are moments of humor here, it’s never mean and it never feels contrived. This isn’t a movie I would want to watch that often, but there’s a lot here that makes me want to see more movies that truly attempt to show people as they are, not as they are turned up to 11.

1. Everything I’ve said about The Savages could easily be said about Lars and the Real Girl, but much more intensely. On the surface, this is absolutely a farce in the making. There isn’t anything about the scenario of this movie that doesn’t scream that it will be an embarrassment-based comedy. And then it completely isn’t. It’s a beautiful story well-acted with real people who are certainly strange, but still manage to be more than just a collection of quirks. Despite its premise, it treats everyone with respect. I’m giving it the win because it shouldn’t work on paper and it works perfectly on the screen.

Posted by SJHoneywell at 3:20 PM

Email ThisBlogThis!Share to TwitterShare to FacebookShare to Pinterest
Labels: 2007, Juno, Lars and the Real Girl, Michael Clayton, Oscar Got It Wrong, Ratatouille, The Savages