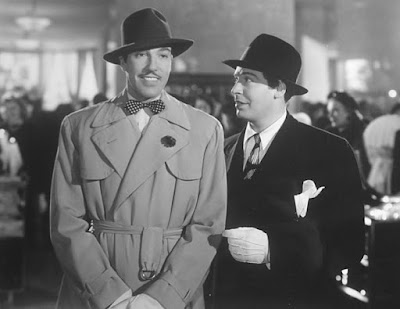 You’re going to have to give me a little license with what I’m about to say here: Tall, Dark and Handsome requires more willing suspension of disbelief than I have in me. Like I said, you need to give me some license here. We live in a world where we have movies with guys flying around in powered armor and where schools of wizards take classes in how to cast spells and make potions. I buy those, though, because they are internally consistent. Tall, Dark and Handsome is anything but.

We start with a shakedown racket gone wrong. A couple of thugs walk into a local store in Chicago and demand money from the proprietor, who instead responds with gunfire. All three wind up dead. Moments later, Frosty Welch (Milton Berle) enters the establishment, sees what has happened, and puts cigars in the mouths of all three dead men. The police show up, see the cigars, and determine that the killer, or at least the person who ordered the hit, was local crime boss J.J. “Shep” Morrison (Cesar Romero), who happens to be Frosty’s boss.

Shep has a solid alibi, though: he’s cross town in a department store picking out Christmas gifts for the chorus girls who work at his nightclub. It’s here that he encounters Judy Miller (Virginia Gilmore), who more or less runs a nursery inside the store as a way to assist mothers who are shopping. Shep immediately falls for her and makes up a story about being a widowed banker with two kids at home and hires her to take care of the brood he doesn’t have. Judy accepts, which forces Shep and his man Frosty into action. Shep essentially rearranges his house and Frosty tries his best to hunt up a couple of kids. The only one he can get is a punk kid named Harry (Stanley Clements).

Shep keeps up the farce—and so does Harry for some reason—until Shep’s mortal enemy Pretty Willie Williams (Sheldon Leonard) shows up for a violent meeting. Rather than shooting it out, Shep and Willie agree to a truce. Shep stays south of the Chicago River and Willie stays north. The deal is immediately in peril when Willie gets a gander at Judy and decides to make a move on her. This meeting also gives Shep the excuse to cancel the farce and come clean with Judy about who he really is, and the reveal also makes young hoodlum-in-training Harry more tractable, since he’d like to join Shep’s gang.

Romance blossoms between Shep and Judy despite his being a gangster and a thug. Except he isn’t. All of the farcical proceedings up to this point have only touched on the edge of insanity—the hijacking of a kid to play act, the immediate rearranging of Shep’s entire lifestyle for a date. The truth is that Shep’s reputation is entirely fake. Everyone he’s ever supposed to have killed is still alive. He has a secret basement built into his house with a jail cell in it where he’s keeping ten enemy goons who have been “disappeared.” Shep is too nice a guy to really kill anyone, and, as one of the thugs says, if Shep is ever actually fingered for a killing, he can produce the body in question still breathing.

So, yeah. That’s the plot and it’s a thing that happens. Shep Morrison illegally kidnaps close to a dozen guys who actually thank him for having done it and nobody seems to care that this guy has built a private dungeon in his basement. In a way, it’s a precursor to “Fifty Shades of Gray.” Since Shep Morrison is wealthy and powerful, his basement prison is quirky and eccentric. If he’d been a poor slob, there’s no way this would have passed the Hays Code.

Anyway, my guess is that you can probably figure out where all of this is going to go. I won’t bore you with the last 20 minutes except to say that our nice guy Shep ends the film by making sure that someone is imprisoned for a crime that wasn’t committed. He’s a hell of a guy, that Shep.

The screenplay is what was nominated here, and, sad to say, the screenplay is really the best part of it. Why is that sad? Because the screenplay isn’t that good. It’s dumb. The characters are motivated entirely by the story that the screenplay wants to tell and not for any believable reason. The romance is tepid, and we’re supposed to believe that Judy is a great talent and an instant hit when she’s only mildly talented on stage.

There’s a reason that this only has a handful of reviews on Letterboxd. Some movies are more or less forgotten for a reason. Tall, Dark and Handsome is one of those. But hey, it’s Milton Berle before he was the king of television, and that’s at least interesting.

Why to watch Tall, Dark and Handsome: Uncle Miltie!
Why not to watch: It’s powerfully dumb.