Film: To Each His Own
Format: Turner Classic Movies on rockin’ flatscreen. 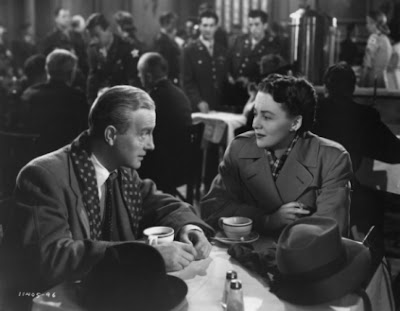 I’ve seen a lot of melodrama in the last seven years or so because a lot of early dramas are of the melodrama variety. I didn’t think I was done with them, of course, but I’m always a little surprised when one shows up. To Each His Own is melodrama of the highest order, from the initial moments to the end. The entire film is designed to tug on the heartstrings of anyone watching it, something that it almost certainly did in 1946.

We start in World War II London on New Year’s Eve. Rather than partying, Jody Norris (Olivia de Havilland) has volunteered to be on fire watch in case of bombing raids. She finds herself working with Lord Desham (Roland Culver), who is just as prickly as she is. He tosses off a bunch of orders to her and corrects her on almost everything. When he almost falls off the roof and she rescues him, the relationship gets a bit easier. The two share a drink and Lord Desham asks her about what led her, an American, to London. Cue the flashback.

As it happens, we flash all the way back to World War I and the home front where young Jody is the object of affection of two men: Alex Piersen (Phillip Terry) and Mac Tilton (Bill Goodwin). Alex is a local boy signed up for the army and wanting to get into the newly-minted air corps while Mac is a traveling salesman. Jody doesn’t want either of them, though, because she doesn’t love either of them. Things change for her when a pilot named Bart Cosgrove (John Lund) shows up on a war bond fundraiser. Jody’s heart goes pitter-pat, the two have one night of passion and Jody is pregnant while Bart goes off to war, and Jody’s suitor Alex marries Jody’s frenemy Corinne (Mary Anderson).

A bunch of things happen at once. Jody discovers that her pregnancy is a troubled one and the doctors more or less recommend an abortion without saying the words. Corinne gets pregnant as well. And Bart is shot down over Europe and killed, which causes Jody to decide to see her pregnancy though. She has the baby and conspires with her nurse (Victoria Horne) to get the baby back into her small town and take custody of him without anyone realizing the baby is hers. She works out a way, but on the day she’s about to claim her son, Corinne loses her baby and is given Jody’s son. Cue the orchestra.

Jody does everything she can to insinuate herself into the life of her child, who is named Greg and nicknamed Griggsy. Corinne, who figures out soon enough that her husband is still in love with Jody, goes through the steps to formally adopt Griggsy and forces Jody out of their lives. Not-so-coincidentally, Mac has shown back up in town and offered Jody a job in New York. With nowhere else to go, she heads to New York to discover that Mac is a bootlegger using a cosmetics company as a front. When his bootlegging operation is destroyed, Jody convinces him to start a real cosmetics company.

What follows is one of the coldest moments I’ve seen in a film of this era. Alex Piersen’s family business starts to go under and when he tries to convert his factory, it’s Jody who can trigger the loan because of the success of her and Mac’s cosmetic company. She demands custody of Griggsy essentially as a line item on the loan. But, a couple of months later, she realizes that Griggsy is miserable and she sends him home, then convinces Mac to send her to London to set up a British branch of the company.

Tired yet? Because there’s the whole third act to go when we learn that Griggsy Piersen shows up in London as an American fighter pilot and is mostly concerned with the fact that he and his girlfriend want to get married and can’t get the license and can’t get their leaves coordinated. The ending hits all of the melodramatic notes that you’d expect.

Don’t think for a second that this isn’t the height of melodrama because it truly is. Virtually everything that happens to Jody is keyed to hitting as many emotional notes as possible. She loses her son, is pushed away from him, and then, once she has him, is forced to give him up. Over and over, Jody suffers emotional hammer blows, and since we’re more or less geared to like her, those hammer blows fall on us as well.

In truth, the best thing here is Olivia de Havilland herself. I find it continually fascinating that she took many of the roles she did, and how frequently those roles paid off for her. She was always willing to take roles that played against the type of a Hollywood beauty. She was nominated for five Oscars, and in four of them, she played characters who were not glamorous in the least, and seriously damaged in several. Here, she’s playing a woman at least a decade older than her actual age, and she’s comfortable as a somewhat dowdy, somewhat plain woman broken down in many ways by her life. She is far better than the film that surrounds her.

As for the rest of the film, well, it’s a melodrama, and it makes no apologies for it. I can imagine that it was a three-hanky picture for women of a certain age in 1946. It’s lost some of that quality, although the ending really does go for the emotional blackmail. It’s not bad, but I don’t see a reason to see it again.

Why to watch To Each His Own: Olivia de Havilland comes into her own.
Why not to watch: It’s melodrama of the most melodramatic type.

Email ThisBlogThis!Share to TwitterShare to FacebookShare to Pinterest
Labels: Best Actress, drama, Mitchell Leisen, To Each His Own