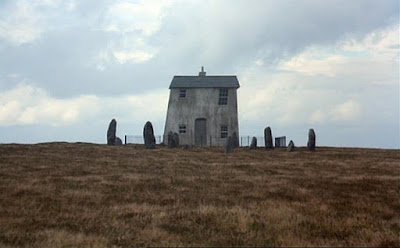 Paperhouse is another one of those movies that isn’t really a horror movie despite being on the Fangoria list of unknown horror movies and in the middle of the pack of the They Shoot Zombies, Don’t They? list of great horror movies. Unlike some of the movies that have wound up on my horror lists, though, there is a section of Paperhouse that is very much in line with horror in terms of how it plays out. In that respect (and in pretty much no other), Paperhouse has some similarity to a film like Willy Wonka and the Chocolate Factory. This is a fantasy film close to magical realism, but it clearly dips into horror for a section.

Anna (Charlotte Burke, in literally her only role) is a young girl on the cusp of puberty, possibly just starting puberty, since she shows a little bit of interest in boys and cosmetics, kind of. Anna seems like a bright enough kid, but she’s also a little bit of a troublemaker. She gets kicked out of her classroom for fighting with another kid, and then collapses in the hall. She claims to her mother (Glenne Headly) that it was just an act to get out of school, so her mother takes her back. Later, Anna collapses again and is discovered to have mononucleosis, more or less.

This is where the magical realism begins. Anna has drawn a house, and when she collapses or dreams, she goes to that house. Later, in the real world, she draws a face at one of the windows, and the next time she goes to the house, there’s a boy of roughly her age in an upstairs window. He’s unable to come down to open the door for her, though, because there are no stairs. Each time Anna returns to the real world, she add something new to the picture that then appears in the dream world. She discovers that the boy’s name is Marc (Elliott Spiers) and that he is very sick and unable to walk.

The connection between Anna and Marc is initially unclear, but soon becomes evident. Both of them have the same doctor (Gemma Jones). As Anna works through her illness, she does what she can to assist Marc with his own. Wanting to help him, Anna draws her father into the picture as well, but draws him frowning. Unhappy with the way he has appeared in the picture, she attempts to cross him out, but succeeds only in blinding him. Thus, in the dream world, Anna’s father (Ben Cross) is a monster with scarred eyes, something very much akin to a boogeyman in the dream world inhabited by Anna and Marc.

In the real world, there is some oddness concerning Anna’s father as well. It’s hinted at but never said explicitly that Anna’s dad is an alcoholic and potentially (but not clearly or obviously) abusive. His relationship with Anna has that sort of odd feel to it. Anna seems uncomfortable around her father. This may be from his real world actions and just as likely may be coming from the fact that he is more or less the monster of her dream world. There is clearly a barrier between them, and as the movie continues to go on, it becomes more and more evident that a good deal of that barrier was built by Anna.

If Paperhouse has a downside, it’s that there is no clear resolution here. The ending can be taken a couple of different ways, each of which is not entirely satisfying, but does have the benefit of being at least close to believable and understandable within the context of the rest of the story. As it happens, I don’t think this is a weakness of the film. This could have very easily taken two or three different paths to give us an ending that would be Hollywood-happy in one way or another and would ultimately tarnish the film and the story it tells.

There’s a great deal to like here, and a lot of it comes from the fact that Bernard Rose took some less normal and likely paths to get to where he wanted to go. Anna is about as far from a typical Hollywood movie kid as you can get. She’s precocious in real ways, not in entertaining ways. She’s not overly cute or cutesy. In fact, in the scene where she experiments with cosmetics, she looks ghoulish. Similarly, Marc is something other than a typical movie boy, finding a middle ground between understanding traditional male roles (wanting to protect Anna from the dream world monster) and pathetic (since he can’t walk or really move his legs at all).

I also really like the concept of the dream world. It is nearly empty in most respects, populating with items only when Anna thinks to draw them. It is sparse and Spartan not because Anna lacks imagination, but because she lacks knowledge. We’re not given fully realized landscapes or even fully realized structures because Anna doesn’t know she needs to do this. It’s only when she discovers that something is needed that it appears in that world at all.

The main thing I look for in a film like this one is a level of internal consistency. It’s the biggest potential problem for anything that deals significantly with unreal worlds like dreams, and it’s similarly a problem for anything that touches on magical realism. Paperhouse, perhaps because that dream world is believably stripped and minimal, manages to avoid this problem. If nothing else, the movie is noteworthy for that.

I found it fascinating. If you can track this down, it’s worth seeing. It’s not going to change your life, but you’ll probably be a little sad that Charlotte Burke never stood in front of a camera again.

Why to watch Paperhouse: This is what real-world fantasy should look like.
Why not to watch: The resolution can go several directions, none of them completely satisfying.