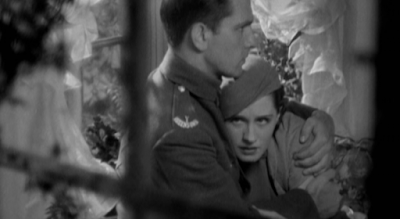 I like Norma Shearer and I make no apologies for it. When I think about the classic actresses I love, I often forget her, though, because her career was voluntarily cut short. Any actor, actress, or director can swing a nomination with a good performance, but you don’t get six of them without having something on the ball. What impresses me the most about Norma Shearer is that she looks modern, like she could be plucked out of many of her films and dropped into something just going into production. With Smilin’ Through, that’s especially the case. Everyone else looks like he or she is in a film made in 1932. Shearer looks like a modern actress doing a period piece.

Smilin’ Through is a classic weepy romance of the early talkie years. Aging bachelor Sir John Carteret (Leslie Howard) sits by the grave of a woman who died at 19. Here he communes with her spirit, and we learn that the improbably named spirit, Moonyeen (Norma Shearer) is his lost love. Shortly after this introduction, we learn that the late Moonyeen has a niece named Kathleen (Cora Sue Collins as a child, Norma Shearer as an adult) who has been recently orphaned because of a shipwreck. Sir John’s friend Dr. Owen (O.P. Heggie) suggest that John take her in, which he eventually agrees to.

Kathleen grows up and, since she’s played by the same person as her deceased relative, turns into the image of Moonyeen. She is pursued romantically by family friend Willie (Ralph Forbes), but she instead falls for an American named Kenneth Wayne (Fredric March), who has shown up to join the infantry to fight in World War I. Sir John forbids the romance, though, and the backstory finally comes out. Young Moonyeen was the childhood sweetheart of Jeremy Wayne (also played by March), but instead decided to marry Sir John. In a drunken rage, Jeremy attempted to kill his rival, but instead shot Moonyeen and fled to America.

The romance happens anyway and when Kathleen runs away to marry Kenneth before he heads to the war, Sir John threatens to disinherit her. Based on this, Kenneth sends her home and goes off to war, where he is naturally injured, and because he is injured, he decides not to be a burden on the woman he loves, instead planning on returning to America so that she won’t discover he’s returned a broken and wounded man. You can guess how this is going to end. In fact, you can probably even hear the orchestral score.

Smilin’ Through manages to do something only a few films have managed to do for me: make Leslie Howard mildly interesting. I think it helps that for a good deal of the film he’s playing as an old man and not a reedy, watery romantic lead. The flashback sequence where we see the death of the ridiculously-named Moonyeen is, for my money, the weakest part of the film specifically because Howard is tasked with being the romantic for a few minutes. In fact, there are a couple of scenes where he’s mildly bad-ass, something I didn’t know he could do.

Since Leslie Howard is watchable here and he’s typically the weak link in any film he’s in for me, there’s a lot going for the cast. O.P. Heggie is entertaining as Sir John’s friend, but this film really does come down to the performances of Fredric March and especially Norma Shearer. It is excessively drippy, but that’s much the style of this era. It probably couldn’t be done a different way. And so, while there’s some mooning about, our two romantic leads play it pretty well, or about as well as can be expected. Even based on the conventions of the time, there are a few scenes that come across as far more modern than a film of this vintage.

But really, it’s Norma Shearer who is worth watching her more than anything else. I can’t get over the fact that she genuinely appears to be someone who could walk off the screen today. Aside from the more melodramatic moments, her performance feels modern as well, and that more than anything makes Smilin’ Through worth watching. The big lesson is that I need to remember how much I like Norma Shearer when I think of the classic actresses I like.

Smilin’ Through is one of those films that probably couldn’t be really remade today. Sure, the guts of the plot would certainly work, but the details clearly wouldn’t, nor would the tone. It doesn’t survive unscathed because of this—it comes from a very different era. Even so, it’s a fine example of a classic romance with a heavy dose of melodrama to help it go down.

What I don’t get is the title. Nobody smiles through anything in this film.

Why to watch Smilin’ Through: Norma Shearer.
Why not to watch: What the hell does the name of this have to do with the story?