Tell Them I Love My Wife 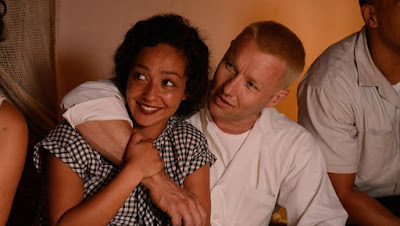 It’s only been a couple of days since I’ve written up a movie, but it feels like a month. I have several really bad weeks every year with work and I’m close to the end of one of them now. This blog is always the first casualty of these weeks. I did manage to sneak in a viewing of Loving, though, if only because I get jittery if I go too long without watching a movie. I was curious to see this, since Loving is the story of the marriage that ultimately destroyed anti-miscegenation laws in the U.S., which makes it a precursor to Obergefell v. Hodges from a couple of years ago.

And really, I’ve just offered you the entire plot. Taciturn bricklayer Richard Loving (Joel Edgerton) and mixed-race Mildred Jeter (Ruth Negga) fall in love, and soon enough Mildred is pregnant. Richard is happy about this—about as happy as he ever expresses in the film, at least, and decides that he and Mildred should be married. He buys a plot of land and decides to build a house on it. However, since mixed race marriages are illegal in Virginia, the two head off to Washington D.C. for the ceremony and return to Caroline County as man and wife.

Shortly after their return, the two are arrested for mixed race cohabitation. Richard is quickly bailed out, but he is prevented from bailing out his wife, and Mildred is forced to stay in a cell until the next week. Eventually their case comes before the court and they are essentially offered a plea bargain to avoid the year jail sentence they have been given. The deal is that they need to leave Virginia and are prevented from returning to the state as a couple for 25 years. The two move to D.C.

The problem is that neither of them like it. They return to Virginia when Mildred has her baby and are arrested again, but are let go when their lawyer claims that it was his fault that they returned. After five years, both Richard and Mildred (but especially Mildred) want nothing more than to return to Virginia and their families. Mildred is advised by a friend to write a letter to Bobby Kennedy, who responds by having Bernard Cohen (Nick Kroll), an ACLU lawyer, contact them and take their case. Cohen works the case, getting the original judge to make yet another ruling on the couple, and gets the case to the Supreme Court. He is aided by favorable press, specifically by bringing in Life photographer Grey Villet (Michael Shannon) to publicize the couple’s plight.

One of the great strengths of Loving is that it more or less sticks to the real story of what really happened. There isn’t any “Hollywooding” here. Mildred Loving really did contact Bobby Kennedy, and the case in the film proceeds as it did when the case was tried. There’s almost certainly some license taken in private conversations, but even these at least seem as if they stay true to the main story, or at least the spirit of the story.

Loving really trades on the performances of the two leads. Ruth Negga’s quiet and deceptively powerful performance is the one that drove my viewing since she was nominated for it, and it’s a fine performance. I call it deceptively powerful because Negga’s Mildred appears quiet and compliant on the surface, almost meek. But it is she who drives much of the case when Richard simply wants everything to go away. Where Richard is characterized by a sort of blunt stoicism that endures what happens like a granite cliff face, Mildred marches their cause slowly forward. It’s a different sort of strength, the kind not often depicted in film. Negga’s portrayal is captivating specifically because her strength is so carefully hidden behind that small and delicate exterior.

Joel Edgerton, who went unnominated, is equally compelling, though, and I think it was the role itself that did him in. As shown here, Richard Loving is a man of very few words and very few outward emotions. Edgerton inhabits that idea beautifully, but it’s easy to overlook because Richard never says six words when he can get away with four. The best acting is that which doesn’t look like acting, and Edgerton always looks like he’s a real person, perhaps not as smart as he needs to be to handle what is happening, but weathering these events in the only way he knows how. It will have to be a very strong year in the Best Actor category for me to think that he wasn’t ignored.

Loving is very good and very much worth seeing. It runs just over two hours and feels like about 90 minutes. That’s both good and bad. When I thought there was about an hour left in the film, there was actually about 25 minutes, the sign of a movie that is well made and well paced. But over this time, it follows a very straight path. We know where we’re going and we know how it turns out.

That’s not always a problem with any historical drama. Movies like Apollo 13 have the same problem. The People vs. Larry Flynt is probably a closer analogue, since it also ends in a Supreme Court decision where much of the audience already knows the outcome. With Apollo 13, the drama comes from how things worked out. With Larry Flynt, it comes from the details of his life. With Loving, there is no real other drama. Most of the people we encounter, including Mildred’s family, support the couple. There is some threat of violence at one point, but it amounts to nothing. The drama here is entirely in the courts, and the outcome is a known quantity, and that works against the film in many ways.

So is it worth it? It is, but it is entirely for the two main performances, which are both as good as you’ll find in a recent movie.

Why to watch Loving: It’s an important story.
Why not to watch: In some ways, it feels strangely empty.