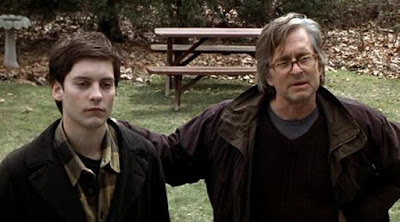 When I first finished the 1001 Movies list, as I got to the end I realized that there were certain aspects of the List that I had ignored. Now that I’m under 250 movies left on my various Oscars lists, I’m seeing the same thing. Specifically, this refers to year of release; there are years that I’ve ignored more than others for some reason. In an effort to not end with a bunch of movies from the same year, I’ve started planning my viewing more carefully in that respect. This is literally the reason I requested Wonder Boys from NetFlix a couple of days ago.

Wonder Boys is based on the book of the same name by Michael Chabon, and for once, it’s an author I know. I haven’t read this book in particular, but I have read some Chabon in the past. Honestly, I think I was supposed to like “The Mysteries of Pittsburgh” more than I did, and I wasn’t aware of the authorship of this one going in.

There’s a lot of plot here, so rather than a complete look at it, I’ll sum it up in a paragraph or two. Grady Tripp (Michael Douglas) is a creative writing professor who has had one critically acclaimed novel. When the movie starts, his third wife has left him. He’s also having an affair with Sara Gaskell (Frances McDormand), who happens to be the chancellor of the school and the wife of Walter Gaskell (Richard Thomas), who happens to be the head of Grady’s department. One of Grady’s students, Hannah Green (Katie Holmes), has a crush on Grady and rents a room from him.

The big problem is another student, James Leer (Tobey Maguire). James seems to be suicidal and has a series of sob stories that seem to indicate that he may well be troubled. On this weekend, the school is holding a yearly writing seminar, which means that Grady’s editor Terry Crabtree (Robert Downey Jr.) is in town for Grady’s next book, which has been going on for seven years and has stretched out to multiple thousands of single-spaced pages. Grady can’t stop writing and can’t get anywhere.

Okay, three paragraphs. A great deal of the plot turns on a few facts. One is that Walter Gaskell is obsessed with the marriage between Marilyn Monroe and Joe DiMaggio. Second is that Gaskell’s dog hates Grady Tripp. Third is that Walter collects memorabilia from the Monroe/DiMaggio marriage. Fourth is that Grady shows this collection to James, and James steals the coat that Marilyn wore on their wedding day. He also shoots the Gaskells’ dog when it attacks Grady. The last plot point of interest is that a man Grady and Terry dub Vernon Hardapple (Richard Knox) believes that Grady has stolen his car.

All of the events of the film take place over a single weekend. Wonder Boys veers wildly between comedy and drama, never really settling in one place. There are some comic moments here that work, but many of them seem tonally off. Or perhaps it’s the drama that seems not to work as well as it should in places. That’s my issue with the film; it wants to be both a comedy and a drama, and it doesn’t pull of that blend as well as it should.

Actually, there’s a bigger problem here, and it’s one that comes close to damning the film. This is a script that is far too much in love with itself and its own cleverness. People don’t talk like this or act like this, and real people with the kind of quirks that seem to show up here are people who only exist in fiction. Far be it from me to bag on a film because it’s too literate, but Wonder Boys very much feels like it wants desperately to be praised so that it can say, “This old thing? It’s been hanging in the closet for months.”

And there’s even a bigger problem for me, and this is what did eventually launch this over the side. Wonder Boys doesn’t earn its ending. That’s a capital offense where I come from. A whole hell of a lot of loose ends come flying together at the end of this, and the movie works desperately to tie them all into bows, and not all of them work.

The film does have some nice performances, though. Douglas, Maguire, and Downey Jr. are all good, and I’m always willing to watch Frances McDormand. There are also some nice cameos from Rip Torn and Alan Tudyk. Katie Holmes is, well, Katie Holmes. She’s not given much to do, and while she is the character who gives us the “this is the whole point of the film” speech near the end, she’s ultimately not very important to the narrative.

I’m a little disappointed. Maybe I’m just in a mood.

Why to watch Wonder Boys: It really is a clever script.
Why not to watch: The tone never really hits anything right.