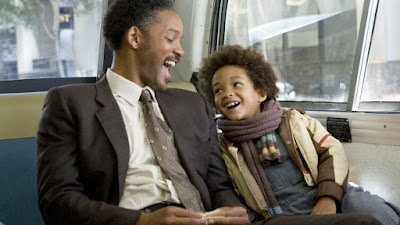 I don’t really know why I haven’t warmed to Will Smith as an actor, given that Will Smith is more or less genetically created to be warmed to. I think what it comes down to is that I don’t always trust him as an actor. He makes some good movies and he’s capable of doing a solid dramatic turn; witness a film like Ali. But he also has a penchant for giant blockbusters, many of which (Wild Wild West leaps to mind, as does the product placement bonanza of I, Robot) are terrible. And some of his dramatic films are pretty terrible, too. So there’s a reason that The Pursuit of Happyness has been sitting on my desk for months until I finally got around to it today.

As with any biography, we’re going to be dealing with something that is partially true and partially cinematic foofery. In this case, what appears to be the case is that we’re not so much changing history as omitting things that don’t particularly reflect well on our title character. That character is Chris Gardner (Will Smith). Gardner sells a particular piece of medical equipment that is a little better than an x-ray machine but costs about twice as much. According to the film, he sunk his life savings into these machines, assuming that they would revolutionize the way x-rays were taken only to find that the machines were incredibly hard to unload. This is a problem, since he and his wife Lisa (Thandie Newton) and their son Christopher Jr. (Jaden Smith, before he became annoying and bent on convincing Twitter that he is either insane or some sort of prophet) are behind on taxes, rent, and just about everything else.

One fine day while out on sales calls, Chris sees a man driving a red Ferrari and asks what the man does for a living. The man in question is a stockbroker working for Dean Witter. Through this contact, he discovers that Dean Witter offers an unpaid internship to 20 applicants every six months. Of those 20, one is hired after the six months. Chris decides that this is what he wants to do, hoping that during his off hours he can sell off the rest of his machines to keep himself and his family barely afloat.

Everything seems to go both right and wrong at the same time. Lisa leaves him, but he convinces her to leave Christopher with him. He’s also arrested because of the staggering number of tickets he has accumulated on his car. This also happens just as he and his son are being evicted from their apartment, which Chris manages to keep for an extra week by agreeing to paint it. He’s arrested while painting and is forced to spend a night in jail, and is released literally just in time to run to his interview for the internship, still covered in paint. Despite this, he gets the internship despite no longer having a car and now being homeless. He and his son are forced to move from place to place each night, living in shelters and even spending a night locked in the bathroom of a BART terminal.

But hey, you know where this is going, right? I won’t take you there in this review, because it’s not too hard to figure this out, at least when you know that this is intended to be an upbeat story of triumph.

It’s hard to judge Will Smith in this because the character he is playing has been crafted to garner our sympathy. True, a great deal of what happens here does come from the real Chris Gardner’s life, but this is very much a warts-removed version of the real story that doesn’t always reflect very well on the man himself. Smith is good in this kind of role. He’s a likeable guy, and we’re more or less guaranteed to like him. It’s a compelling story, and that helps. But it’s also the sort of role that seems designed to play to Oscar’s sympathies.

Is it good? It is, but again, we know where it’s going to go, so even when things get as bleak as they can, it never really gets so bleak. That’s more or less the point.

That said, Smith does seem to handle this role well, so I can’t complain about the casting. I’m not sure that a lot of actors have the sort of persona that this role would require. Tom Hanks generally has this sort of likeability. It seems like a little bit of a stretch for an Oscar nomination, though (but we’ll get there eventually).

I suppose the only other thing really worth noting here is that Will Smith’s actual son plays his son in this. This was Jaden Smith’s screen debut before he got weird. Once upon a time, he was a cute kid. So were we all.

Why to watch The Pursuit of Happyness: It’s a genuinely heartwarming story.
Why not to watch: It tweaks all of the chords you think it’s going to.